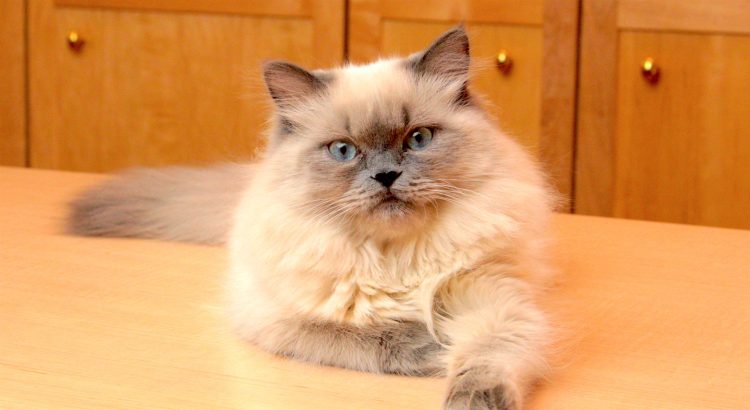 The Himalayan was the most popular of all the cat breeds in 1996 and remains a favorite today.

This cat breed resembles a Persian and a Siamese and was named for its pointed pattern. The body and coat color resemble the Persian, and the color, pattern and dark blue eyes mirror those of the Siamese.

A pointed pattern refers to darker colors on the extremities, such as the ears, legs and tail.

Himalayans are medium to large cats with short bodies. The large, round head sits atop a short, thick neck. The ears are large and round and set far apart. The eyes are also set far apart and rounded but are small across a flat face.

The tail is usually short and thick, and the paws are large.

The Himalayan appeared in the United States in 1924.

In the 1930s, Dr. Clyde Keeler and Virginia Cobb crossed Siamese and Persian cats to breed a Himalayan kitten. They named the male kitten Newton’s Debutante.

The Himalayan was recognized as a color point longhair in 1955 after Canadian Ben Borrett started a similar breeding program of his own.

Further efforts helped establish the breed. Marguerita Goforth used a cat with long hair and seal point coloring to create a new line. A cat resembling a Persian with Siamese coloring was bred under her program.

Organizations in the United States began recognizing the breed as a Himalayan in 1957.

The Cat Fanciers’ Association added the Himalayan as a separate breed in 1957, but surprisingly changed the breed to a version of the Persian in 1984.

People who have Himalayans describe them as loving and affectionate, and the cats often become very attached to their family members (and sometimes one family member in particular).

They like to cuddle but are not overly demanding for affection; this can vary by cat. These intelligent cats are responsive to human moods and emotions and can be talkative at times despite being described as docile and quiet.

Some people are able to teach their Himalayans tricks as well.

Himalayans are good with children as long as the kids aren’t too loud or rambunctious. Dogs are fine as housemates as long as they are not extremely high-energy or excessive barkers.

Monitor food intake to prevent obesity. Himalayan cats don’t have specific exercise needs in addition to those of regular cats. Their physical activity should be similar to that of their feline counterparts (sleeping long hours, playing, running and jumping).

Himalayan cats do best as indoor-only cats. In addition to being a popular cat breed that might be easily stolen or picked up and taken home by someone thinking they found a stray cat, Himalayans are not fighters by nature.

They would not do well defensively against typical outdoor animals.

Provide a scratching post and keep your Himalayan indoors instead of declawing.

HIGH: The biggest challenge associated with a Himalayan cat is the grooming routine. Brush your Himalayan daily to prevent matting. Regular bathing once per month is also recommended.

Litter can become stuck in the paw pads and attach to the long hair of the cat, and this should be checked and cleaned daily to prevent ingestion of the litter when the cat self-grooms. Brush the teeth to prevent periodontal disease.

The eyes are prone to excessive watering and staining, so check and clean them daily. Trim the nails regularly.

This video shows a docile Himalayan performing some strange arm movements. We can’t tell if it’s some kind of exercise routine or if the cat is swimming in the air:

If you do decide to contact breeders, spend enough time getting to know them and their facility to determine if they are operating a kitten mill.