My cat Zorro was always trying to make a break for it.

The handsome charcoal-colored Abyssinian cross had shown up in our backyard one summer morning when he was about 8 weeks old.

He’d never experienced bone-chilling winds, snowdrifts or sleet — so for him, the woods beyond the house had been a kitten’s paradise.

He kept escaping, and we kept bringing him back inside. It was a regular routine, but not a funny one because we lived right off a main route.

Many years ago, almost everybody’s cats lived outside.

But these days, more and more people are keeping their cats inside — which means they’re safe from cars, predators and disease.

According to Patricia Curtis, author of The Indoor Cat, “You can give [your cat] an indoor life that is rich and happy as well as comfortable and safe.”

If Your Indoor Cat Keeps Trying to Escape

But what if your cat, like Zorro, has wildcat fantasies and yearns for the world beyond the windows?

“Once they get outdoors and get a taste of the exciting world out there, there isn’t a lot you can do to prevent it,” says Susan Baker of The Abyssinian Cat Club.

There are things that can help you keep your cat inside, though:

Another suggestion from Baker to keep a cat from going outside:

Yet another behavior-modification trick that Baker recommends: 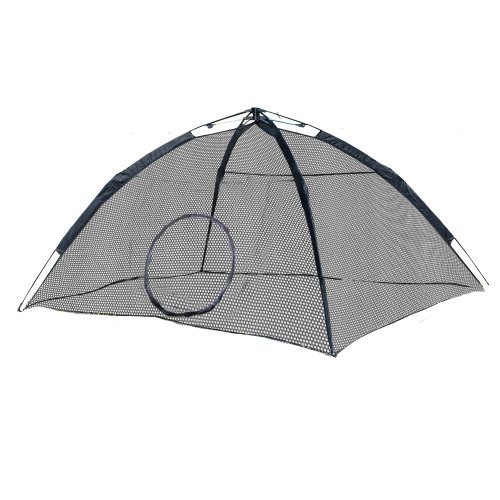 A Cat Enclosure to Keep an Indoor Cat From Escaping

Cat enclosures can be a godsend to indoor cats.

My husband, an engineer, once built one for our gang out of scrap wood and chicken wire.

My friend Linda also got a cat enclosure. This is because some of her cats scream and spray if she tries to keep them indoors all the time.

Her roofed enclosure opens up off her dining room. Inside are perches of varying heights, cat beds and insulated little “tents” with fleece mattresses.

The ABO Gear Happy Habitat for Indoor Cats, pictured above, offers 30 square feet of safe outdoor play space — and it folds down into a travel bag.

How to Find a Cat Who Has Escaped

OK, so you’ve tried every trick you can think of to prevent a cat escape.

But one day it happens — every cat lover’s nightmare. Your indoor cat slips out of your house and runs off.

What do you do?

Think About Your Cat’s Personality

This is when you really need to start thinking like a cat — like your cat, to be specific.

Basically, you need to build your recovery plan around your cat’s personality.

As an example of assessing a cat’s personality, let’s take Webbie, a Burmese cat who escaped:

Because of that last point, they knew to bring along his favorite snack food — a bag of potato chips — on their searches around the neighborhood.

Get the Word Out

Posters, fliers, signs, word of mouth — whatever it takes.

“The first thing I did was to make up a sign and put it up in the community clubhouse,” Donna says. They then went off in different directions to comb the neighborhood.

Whenever Donna and Bill ran into somebody during their search, they told that somebody about their missing “little brown cat with yellow eyes.”

“I told them not to approach him because he would probably run. Had it been one of the other cats, I would have told them to tailor that to the cat,” Donna says.

Donna was relatively new to the area. Otherwise, she would’ve contacted the local animal control person and vets in case someone had brought in a “stray.”

As it was, she contacted the residential community’s management and sales office just in case anybody happened to walk in and mention seeing an unusual brown cat.

For more, see our companion article “How to Help When Pets Go Missing.”

Check shelters first-hand instead of relying on what you’re told over the phone.

Plus, there’s a surprising amount of ignorance regarding cat breeds. I’ve seen people mistake Siamese — a distinctive breed if ever there was one — for Abyssinians, another equally distinctive breed.

Other Things You Can Do When Your Cat Escapes

On the third day, Donna and Bill got word that Webbie had been sighted.

Donna grabbed one of her other cats, Saba, put him in the cat stroller, and headed out … only to see Webbie coming toward them.

Saba meowed, and his buddy Webbie trotted over. They were “nose to nose” when Donna nabbed him.

Webbie did go missing again shortly after his return but was apprehended the next morning.

Donna and Bill found and boarded up his escape route — and Webbie went back to being an indoor cat.