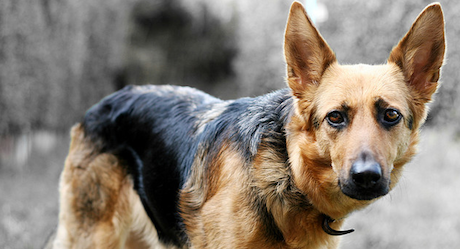 How Do Dogs Smell Fear?

When I was growing up in a small town in South Carolina, all the kids in my neighborhood would hang out, going from house to house. Our parents were forever reminding us to act calm and unafraid when coming upon an unfamiliar dog. “Don’t show your fear,” they would say, “because the dog will know you are scared.”

It’s pretty hard for 7- to 10-year-olds not to show they are frightened by something, but we always did our best. As I got older, I wondered, How do dogs smell fear?

However, through research, I have come to learn that it has not even been firmly established that dogs can literally smell fear.

Dogs Can Only Sorta Smell Fear

Actually, it turns out this is a very debatable subject. True, the portion of the canine’s brain that is used for sorting out smells is up to 40 times the size of that same part of the human brain.

As for fear, being frightened can make humans sweat, an odor that a dog can easily identify. Then there is adrenaline and associated hormones, which will pump through our bodies when we are are even a little nervous. Just because we don’t know the “adrenaline scent” ourselves doesn’t mean that a dog won’t recognize it. However, let me nitpick and say that being able to smell our sweat glands doesn’t mean a dog can literally smell the emotion of fear itself.

Most likely, playing a far bigger role in determining our level of fear is the canine’s outstanding ability to read our body language. The dog feels our fear and senses we are scared just by watching us.

Dogs are very smart at figuring out our emotions. Anger, feeling threatened or being nervous cannot be hidden from a dog.

In fact, he may pinpoint your fears before you even realize them. People who are afraid of a dog often stare directly at it, probably in hopes of watching his every move. But the dog may take the stare as a warning that he is going to be confronted, therefore becoming aggressive.

Or It’s Just a Little of Both

Maybe I’m simply nitpicking too much. Let’s just say a dog’s aggression toward a fearful person is likely a combination of both olfactory and visual cues. Sense of smell may be one factor, but it’s definitely not the only one.

How do dogs smell fear? And can dogs even smell fear at all, in the strictest sense of the phrase? The answer to these questions may never be known with certainty. But even though I am an adult now, I still choose to follow my parents’ teachings and not show my anxiety when approaching an unknown dog. Whether my uneasiness can be smelled or sensed, I always try to keep my cool.