Nobody wants to get bitten by a dog.

Worse still, no one wants their dog to be the biter — especially where kids are involved.

But say a child hugs a fluffy dog they know. If the dog isn’t happy, then disaster can strike.

Think of it this way: Consider how dogs like to sniff rears … and yet we humans would be unhappy if forced to butt-sniff. So why do we assume dogs like the human behavior of hugs?

Do Dogs Like Hugs? The Science Says Not Really.

As it happens, basic dog psychology easily explains why some dogs dislike hugs.

A stressed, surprised or frightened dog experiences a massive shot of adrenaline and cortisol — fight-or-flight hormones — in the bloodstream. They put the dog into survival mode to either flee from the threat or fight back.

What if a dog feels threatened by a child hugging them but is held so tight they can’t wriggle free? What happens next?

Because children are small, hugging puts them close to the dog’s mouth. Therefore, hug-related bites are often to the child’s face.

What’s more, hugging an unwilling dog stresses them out — which may lead them to bite.

For more, see our related article “Teach Your Kids How to Greet a Strange Dog.”

In the Wild, Dogs Huddle When There’s Danger

Another argument against hugging is what happens in a pack situation.

Take a pack of wild dogs, for example:

So when we hug a dog and hold them tight, the pressure against their body can send the wrong message. Instead of reassuring the dog, it’s like hanging out a flashing neon light that screams DANGER!

This presses a lot of buttons for me as a veterinarian.

It’s common to have a small dog clutched tight to the bosom of a “comforting” client. That little dog then snarls and snaps because the little dog has picked up on the person’s anxiety, and the hug sends a DANGER! message. Of course the dog is going to be wary.

Instead, reassure your dog by doing the following:

In 81% of Photos of People Hugging Dogs, the Dogs Look Distressed

He wanted to know if dogs loved or hated hugs.

Dr. Coren looked at 250 images of people hugging dogs. He then analyzed the dogs’ body language for signs of stress.

The results were surprising and even alarming:

Now, take a look at the images below: 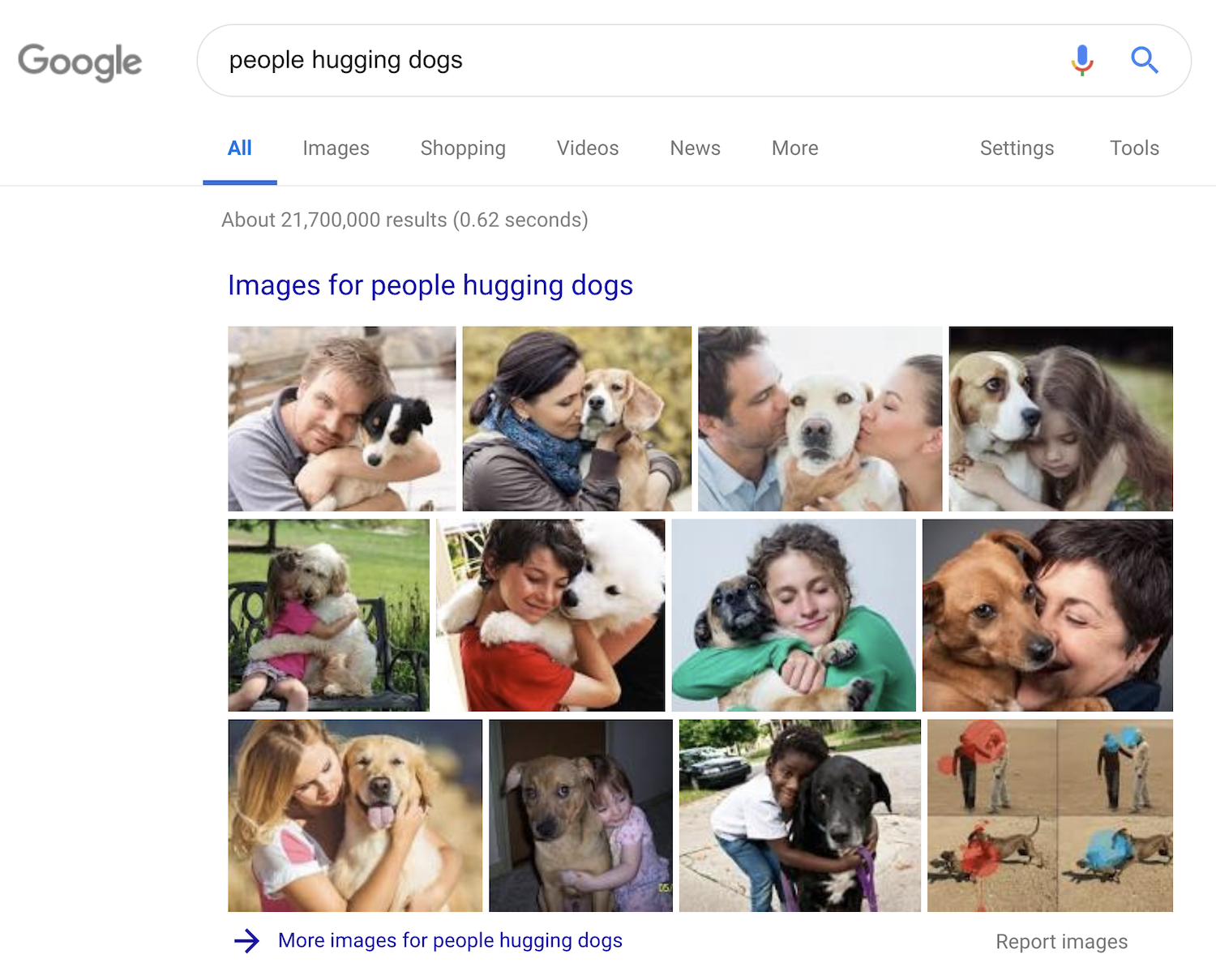 This is just a snapshot of a Google image search for the phrase “people hugging dogs.”

What do you see in most of these pictures above: love, dislike or ambivalence?

6 Tips for Hugging Your Dog the Right Way

Make sure your dog is happy by following these 6 tips:

1. Get the dog used to being touched.

Touch a part of their body that’s not controversial, such as stroking along their back.

Then praise them for being so brave, and reward them with a treat. This helps the dog associate touch with nice things.

Slide your hand down a leg slightly, then praise and reward. This is also a great technique for teaching foot-phobic dogs to have their paws touched.

3. Avoid forcing the dog into a situation they’re unhappy with.

Take things slow and steady so you don’t overwhelm the dog with affection.

Less is more. Give the dog the option to leave while they’re still happy.

5. Be aware that dogs are individuals.

Some dogs may enjoy a hug and a snuggle. Others? Not so much.

Try to give them a choice of whether they walk away or participate.

6. Reading the individual dog is key to happy hugs.

Don’t overlook the context of the cuddle.

For example, your dog may be happy to snuggle while watching TV in the evening, but they wriggle and squirm when it’s time for supper. Don’t force the dog to stay still, or this could backfire with a bite.

Don’t Send the Wrong Message by Hugging Your Dog

Also, be mindful of the dog’s state of mind when you move in for a hug.

The dog with a fireworks phobia may be more stressed rather than comforted by a cuddle. If the dog genuinely takes comfort in an embrace, then fine, but let them hide away if they want to until the noise goes away.

If you persist in hugging during a fireworks display, you might accidentally teach the wrong lesson: Even if a dog likes hugs, they may look on this as a reward for fearful behavior.

This accidentally reinforces the wrong message — that they’re right to be afraid.

Hugging and a Dog’s Heart Rate

In a neat study from the 1970s, Erik Zimen, a wolf behavior expert, scored the physical appearance of dogs (such as ear position, tail and lips) when the dogs were being hugged. He also measured their respiratory and heart rates.

What happens when we’re fearful? Our heart rate shoots up. Anxious? We breathe more quickly in preparation to run away.

So if dogs don’t like being hugged, those dropped ears and whites of the eyes should be backed up by a racing heart rate and fast respiration.

Zimen found what we instinctively knew all along:

Likewise, it can be the same for a dog when an unfamiliar child cuddles them too tight.

Here are some more tips for children to stay safe around dogs:

Hugging Your Dog? Use Common Sense.

In short, judge hugs on an individual basis.

When you know the dog and they know you, especially when they’re pleasantly tired, then a hug can be a lovely thing.

However, if you don’t know the dog or your pet is focused on food or wanting a walk rather than love, then think twice before trying to hug the dog or cuddle them.

Does Your Dog Kiss You?

With hugs out of the way, let’s talk about canine “kisses.”

Is it OK for a dog to lick your mouth, or will it make you ill?

There’s an urban myth that a dog’s mouth is cleaner than our own.

And this is where the first problem with kisses comes in. That “doggy breath” your pooch has? It’s caused by a mixture of bacteria, plaque and inflammation. When dogs lick you, they’re transferring those doggy bugs onto your skin or into your mouth.

A study by Japanese scientists found that dog saliva contained bacterial pathogens that could cause periodontal disease in humans. That means gum inflammation that can potentially lead to the loosening and loss of teeth.

Worse still, if those bugs get into the bloodstream, they can cause infection in the heart or kidney.

But doesn’t dog saliva have disinfectant properties, you might ask?

This is something I come across regularly as a veterinarian, when people let their dog lick a wound or a surgical incision. They believe that licking is OK because of saliva’s natural disinfectant properties.

Scientists looked into this and came up with a “yes but no” answer. It turns out dog saliva is weakly antiseptic toward E. coli and streptococci, but little else. Because the most common skin pathogens are staphylococci, licking is a bad choice — it makes the area moist and therefore a better environment in which bugs may breed.

Those weak antiseptic properties certainly are not enough to protect your health if the dog kisses you.

A dog’s mouth and lips can be contaminated with some pretty unpleasant things (think eating poop and scavenging trash). These can include infectious agents such as:

The negative effects of that slurpy kiss could persist long after the saliva has dried. And that’s without taking the behavioral side into account.

A mother licks her newborn puppies to stimulate them to pass urine and feces. A dog licks their paw to comfort themselves.

But if your dog licks you, it could be prompted by anxiety — the dog is worried and is giving you an appeasement signal. Rather than saying, “I love you,” they’re saying, “I’m a bit scared of you.”

Licking is habit-forming, so when you giggle and fuss with the dog, they’ll likely repeat the action to get attention. This can lead to unwelcome, intrusive and downright soggy licking.

To break this habit, say, “No” in a firm voice, get up and walk away. Denying the dog attention when he licks sends out a strong message that it displeases you.

Alternatively, you can put the behavior on cue and teach the dog a “lick” command. This then gives you the means to teach a “No kiss” command when you want licking to stop.

Canine kisses may be cute, but they’re not without hazard. You do risk picking up infections. So why not teach your dog a healthy “high-five” greeting instead?

This pet health content was written by a veterinarian, Dr. Pippa Elliott, BVMS, MRCVS. It was last reviewed Sept. 14, 2020.
If you have questions or concerns, call your vet, who is best equipped to ensure the health and well-being of your pet. This article is for informational purposes only and is not a substitute for professional medical advice, diagnosis or treatment. See additional information.
ADVERTISEMENT