We could soon get some 4-legged help in the global fight against the coronavirus: COVID-19 detection dogs.

For more than a decade, organizations like Medical Detection Dogs in England have been involved in the pioneering research of training dogs to detect various illnesses. These working dogs have been employed to detect cancer, for example, before any current test would be capable of registering the disease.

Dogs also have been trained to detect the onset of seizures, diabetic hyperglycemic episodes, allergic reactions and the dropping cortisol levels in people who live with Addison’s disease.

Most recently, the organization has partnered with the London School of Hygiene & Tropical Medicine (LSHTM) and Durham University to train dogs to detect COVID-19, the disease caused by the recently discovered coronavirus.

This is groundbreaking work that could ultimately help stop the spread of this illness amid the current global pandemic.

The COVID-19 dogs are being trained intensively within a short time frame “to help provide a rapid, noninvasive diagnosis toward the tail end of the epidemic,” the organization wrote in a statement, adding that it has “approached government about how dogs can play a role in the fight against the disease.”

The dogs will be capable of screening anyone — including people without any symptoms — in a way that is highly accurate and noninvasive, freeing up the limited resources of government testing.

Dogs are expected to be able to screen up to 250 people an hour.

Medical detection by dogs has proven to be extremely accurate and “above the World Health Organization standards for a diagnostic,” says Professor James Logan, head of the LSHTM Department of Disease Control.

“Our co-founder and CEO, Claire Guest — who had been interested in anecdotal evidence that dogs could detect disease for many years — had a case of life imitating art when her own fox red Labrador, Daisy, warned her of a deep-seated breast cancer,” Butlin tells Petful.

The cancer “would almost certainly have gone undetected for several years if Claire hadn’t had such a bond with her dog and known she was trying to tell her something,” says Butlin.

“It was really weird,” Guest recalled to The Telegraph. “Daisy sat staring at me, then she boshed into me a couple of times, prodding my chest with her nose.… I said, ‘Silly girl, go away.'” That evening, Guest felt a lump in the exact spot Daisy had pinpointed.

Previously, Guest led the world’s first team in a study of canine detection of bladder cancer, which was published in the peer-reviewed medical journal BMJ.

In 2012, Medical Detection Dogs was accredited as a member of Assistance Dogs International and Assistance Dogs Europe. Two years later, Guest’s dog Daisy was awarded the Blue Cross Medal for her pioneering work in the field of cancer detection.

The organization has participated in 2 National Health Service–approved clinical trials on urological and prostate cancer. Their role was to explore the potential for dogs to detect these cancers accurately from urine samples. Studies followed on the ability of dogs to detect malaria, Parkinson’s disease and specific bacteria.

Here are a couple of the COVID-19 detection dogs currently undergoing training. 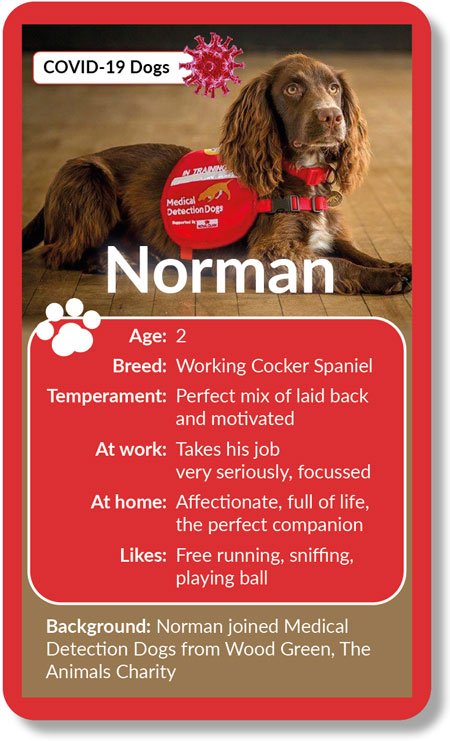 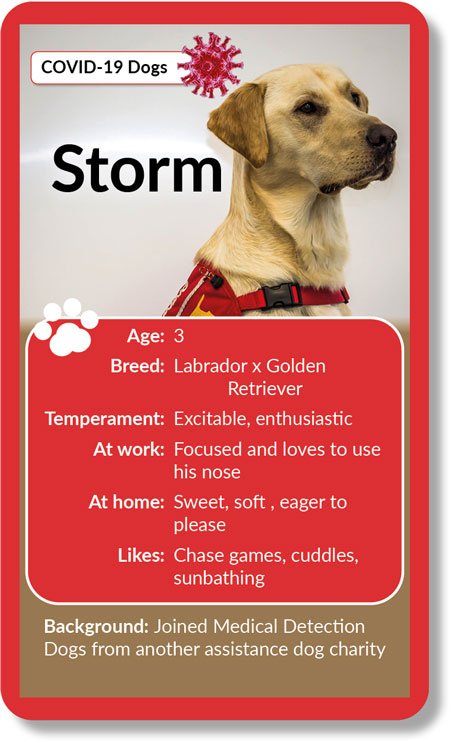 “We train our Bio-Detection Dogs in a brand-new, state-of-the-art training center at our HQ near Milton Keynes [northwest of London],” Butlin tells Petful.

“Some of the training of our Medical Alert Assistance Dogs also takes place here but is continued by our fabulous volunteer socializers, whose job it is to help get them used to public access — being happy, settled and comfortable in places like supermarkets, doctors, cafes and public transport,” she says. “This is all carried out by the guidance of a socializing trainer.”

The dogs are donated by members of the public, breeders, other assistance dog charities and rescue centers. The organization currently has 6 bio trainers and 6 socialization trainers.

It can take up to 2 years to train the dogs, during which time they live with volunteer socializers and their families.

The dogs spend the first year working on socialization and basic obedience training with the addition of training to have good impulse control when there are distractions, such as other dogs.

“They will then start basic scent training and will be assessed on the use of their nose, temperament and character, and depending on the outcomes, a path as a Bio Detection Dog or a Medical Alert Assistance Dog will be considered,” says Butlin.

At that point, the dogs advance to more focused training, either in disease detection in the training room or in a specific individual’s odor.

For disease detection, they use different clinical human samples, says Butlin, including urine and sweat, depending on the condition.

Recently, the organization partnered with Durham University, LSHTM and the MRC Unit The Gambia on a malaria detection study. For samples, they used 400 schoolchildren’s socks, which were worn for 24 hours and collected from 4 different locations. The dogs’ accuracy in detecting malaria exceeded the World Health Organization’s diagnostic standards.

The COVID-19 detection dogs will be trained on noninfectious samples, says Butlin. Their success depends on whether the coronavirus has a distinctive odor. They are working on ways to capture the odor and then safely present it to the dogs.

All of this is possible, of course, because of dogs’ remarkable noses and sniffing talent.

The Genius of a Dog’s Nose

Most humans rely on sight to explore the world. Dogs rely on their remarkable nose.

The part of a dog’s brain that is devoted to scent is around 7 times greater than the corresponding center in a human brain. It is generally understood that a dog’s nose — depending on breed and the individual dog — is 10,000–100,000 times more sensitive than a human nose.

A dog’s nasal structure is also brilliantly designed. In humans, odors are processed by a small area on the roof of the nasal cavity that lies along the path of airflow.

In a dog, a portion of air that’s inhaled goes directly to a recessed area in the back of the nose that processes odor, while the rest of the air flows down to the lungs.

The membrane that absorbs odors spreads across a maze of bone structure, called turbinates, and routes the molecules based on their chemical properties.

This allows dogs to process different strains of odor that make up one entire scent. The receptors transform the scent into electrical signals that travel to the olfactory center of the brain to be analyzed.

Their scent ability is also heightened because a dog doesn’t exhale through the same physical structure that inhales air. They have a flap in each nostril that can direct the flow of air, so their exhale doesn’t disturb the flow of scent they are focusing on. In this way, a dog has the ability to detect odor continually. It’s anatomically brilliant.

Preventing a Second Wave of COVID-19

The training of the COVID-19 detection dogs has already begun. “We have a number of pre-trained dogs that could be made ready in approximately 6–8 weeks,” says Butlin.

“If our research is successful, we may be able to use COVID-19 detection dogs in public places such as airports. This would help prevent a second wave of the disease after we have brought the present pandemic under control.”

As states begin to open up their businesses and public spaces, it is expected that the spread of the virus will increase.

But even in states with stay-at-home/closure orders in place through June or beyond, effectively reducing the number of hospitalizations and deaths, the coronavirus is expected to reappear next winter. Coupled with the number of people who are infected but remain asymptomatic, testing will be critically important.

Medical Detection Dogs is working hard to provide dogs for the next round of the pandemic. We may just owe our lives to these COVID-19 detection dogs.