I have written in the past about my rescue Cocker Spaniel, ZeeZee.

I love him. I saved him from prison. Literally.

Zee had “failed” in three homes and was scheduled to go to prison to be a therapy dog.

Now, why did ZeeZee fail in his adoption homes? Because he bit people. Children, mostly.

He was fearful and often felt threatened by new or fast moving people. The rescue group’s idea of sending him to prison to rehabilitate unpredictable, unknown inmates didn’t sound like a solid plan to me.

This was six years years ago, July 2, 2006. I adopted ZeeZee, and he appeared to be an absolute sweetheart. Perfectly behaved at home. He loved my other dog, Wally, and the cats. He seemed to be house-trained.

In two days, after he was behaving perfectly, I took him to a huge Fourth of July picnic with lots of my friends and their kids — where he promptly bit three children.

Luckily, none of the parents chose to sue me. They weren’t very bad bites. Just embarrassing.

ZeeZee is named after Zinedine Zidane, a soccer player in the World Cup that summer who was given a red card for head-butting other players. Obviously, ZeeZee deserved to be thrown out of the game that summer too. I couldn’t have a dog who bites, period.

My dogs are often out and about on the property at the hospital, and I couldn’t chance a client or a client’s child being bitten by the zany ZeeZee. So he went into intense training.

A couple of months of clickers, treats, love and affection, and supervised visits with children rehabilitated Zee, and there hasn’t been a bite since.

That doesn’t mean Zee has been a simple dog to own. He came with a lot of baggage and troubles.

Zee was picked up as a stray. He had been microchipped as a pet store puppy from a puppy mill. The rescue group was therefore able to locate his first owner, a man with five children.

When the original owner got the call that his 8-month-old pup had been found, his response was certainly honest: “That little dog is a pain in the ass. Why do you think I dropped him out of my truck five towns away?”

And so, some light was shed on little ZeeZee, a complicated dog who just wanted to be loved.

He has peed in my house seven times this week, once a day, not missing a morning.

Last night, on his last little trip outside, he was skunked. So now he’s a leg lifting, STINKING little dog.

Since Zee became part of the family, there has been an occasional puddle in the kitchen attributed to ZeeZee. It was so rare, I excused it. I chalked it up to his difficult beginnings in life.

ZeeZee had finally found an understanding home, perhaps, but still had fears and insecurities.

Even though he had been neutered by the time he was 8 months old, I imagined his house-training may not have been done with love and grace due to his dirtbag owner. So I let an occasional urine-marking episode slide.

But what was going on this week?

It wasn’t difficult to figure out part of the reason for Zee’s regression.

We had a large party last week for 50 people. Zee was extremely well behaved at the party. My husband and I have been a little lazy post-party. An extra table brought up from the basement has remained in the kitchen for the week, along with lots of strange dishes and party paraphernalia. We moved the kitchen cart to a completely different spot, and old chairs were brought inside from the shed.

Each morning, after going outside immediately upon waking up, Zee has come back into the kitchen, waited until my back was turned, and silently christened the party furniture. He is telling me that I have ruined his feng shui.

Finally catching on, I moved the furniture back to where ZeeZee said it belonged. Thinking the problem was solved, I was quite surprised when my bare foot stepped into a warm pool of liquid surrounding a dining room chair leg this morning.

So what the heck, ZeeZee?

Tied to the Hip — Literally?

Today, after bathing the dog in some Dawn and hydrogen peroxide (nothing really works on a direct skunk hit), I decided to do a little brushing up on urine marking behavior in the older, neutered male dog.

My findings are not surprising: Zee just needs a little continuing education.

For a period of time, it seems as if we’re going to be tied at the hip.

Here’s what I intend to do to get ZeeZee out of the dog house:

Because of the party I hosted, ZeeZee had his comfortable home turned upside down, at least in his eyes. 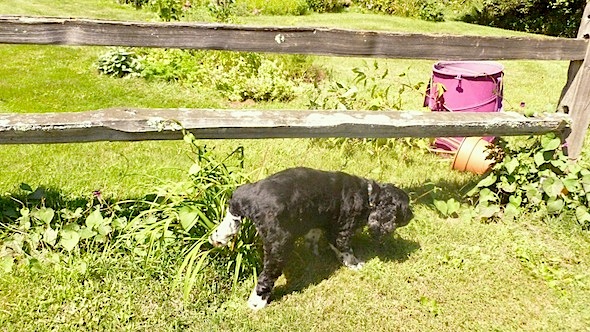 Think of It as an Addiction

For many of you, trying to understand why your dog runs into another room and lifts his leg may be impossible. It’s usually never as easy as removing the party furniture.

If your dog feels threatened every time a new person enters the house, you’d have to live like a hermit crab in order to solve the problem. That’s not realistic.

What if the simple trigger of a new shopping bag on the floor is enough to cause a leg lift?

Think of these dogs as suffering from an addiction. They cannot help themselves from inappropriate urination. They need your help.