I have a confession to make.

One day, on impulse, I bought a puppy from a pet store.

This fateful decision, and the long ordeal that followed, made me realize how we the consumers are the ones who perpetuate the demand for puppy mills.

It is we who continue to buy from the pet stores and websites that source these innocent dogs.

I am embarrassed by my “dirty secret,” yet I hope that by sharing my story — actually, Maggi May’s story — we can all learn from it.

I had planned to meet a friend for lunch one day, and walking by a pet shop I saw the cutest little Cairn Terrier watching me from the window.

I shouldn’t have made eye contact, but I did.

I swear that little dog was communicating with me: Take me home, pleeeease!

All through lunch I thought about that sweet little face and those big black eyes. I hadn’t cared for a pet for a very long time, and I was at a particularly vulnerable place in my life.

I walked back to the store, just to look at her again. I went inside, and the store clerk thrust all 2 pounds of irresistible dog in my arms, and the puppy snuggled against me and licked my fingers.

Nearly a thousand dollars later, my credit card smoking, I left the store with my new puppy.

Of course I had to also buy the crate, bed, bowls, leash, collar, toys, food and a folding fence enclosure.

I named her Maggi May because I bought her on May 12. She was 13 weeks old, blonde, and I was head over heels in love with her.

I sent her registration papers off but planned to spay as soon as she was age-appropriate.

A few days after I brought Maggi home, she developed a cough.

I had an appointment with the veterinarian for the following week, so I made a mental note to have it checked. By Sunday of that week she was barely able to breathe. I rushed her to the emergency clinic, where she was diagnosed with bordetella, a viral infection commonly known as kennel cough.

Maggi was so tiny and so sick. She ended up spending a couple days in the animal hospital on intravenous fluids fighting the virus.

She survived, and I was relieved.

I contacted the store, which had a “seven-day return policy” regarding the purchase of live animals. I would not have returned her to the store anyway, but I expected some restitution for selling me an infected dog!

But Maggi was alive and she was home, so I abandoned the effort.

The First of Many Surgeries

Several months later, I took Maggi for her spaying.

On a previous appointment the veterinarian noticed one of her eyelids was torn, probably from birth and not healing properly — so this time, during the anesthesia, he repaired her eyelid. By now Maggi was 7 months old and weighed about 10 pounds.

The healing process from the spaying did not go well. It took a long time for the incision to close, and Maggi was left with a hernia at the incision site. Her eye didn’t close properly, either. The vet performed a second surgery to repair the hernia and resuture her eyelid.

Weeks later the incision was still not healing, and the eyelid did not close. I changed vets, and the new provider found that not only did Maggi have issues with the incisions but she had several extra teeth that should be removed.

Yet another surgery was performed. This vet used a mesh panel to secure the incision. The hernia was repaired, but the incision took an unusual amount of time to heal.

Maggi’s eye was still torn, and this vet recommended drops daily to prevent infection. The tear in her eyelid could not be repaired. The vet was concerned Maggi may have Cushing’s disease (a condition that compromises the immune system), so an expensive test was conducted and sent to the University of Georgia (UGA) for evaluation.

Maggi didn’t diagnose with Cushing’s, but she was found to have an autoimmune deficiency.

She also suffered from “multiple genetic deformities” common in puppy mill dogs. She could no longer have inoculations; nor could she risk exposure to disease at the dog park or doggie day care.

I couldn’t even take her to the groomer!

I hired a doggie au pair to come to the house twice a day to walk her around the neighborhood and stay with her when I traveled.

She would often develop cysts between her toes and under her tongue. If left to heal with simple topical ointments, they would break and ooze, making walking or chewing painful.

Taking her to the vet required him to sedate Maggi and open and drain the lesion, then suture the incision.

My dog was on a constant regimen of antibiotics and pain, antidiarrheal and antinausea meds. At some point she developed a persistent cough and chronic reverse sneezing.

She would wheeze so badly that I was never sure she would breathe again. I would hold her and stroke her face and stomach and cry.

It was all I could do. 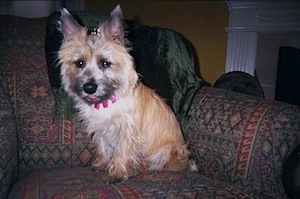 She started having trouble eating, and again I took her for evaluations.

I consulted a UGA expert, who diagnosed Maggi as suffering from severe, progressive craniomandibular osteopathy — again a genetic disorder.

CMO is a painful condition in which the bones in the head fuse. Eventually Maggi would not be able to eat or drink or even breathe without assistance.

I found a homeopathic animal specialist, who administered a routine of “natural herbal remedies” and craniosacral massage for her. I traveled 120 miles a week to buy fresh, raw food from a recommended source.

Maggi would become so constipated she would cry and then collapse when she tried to defecate.

I would go to work in the morning with the realization Maggi may not be alive when I returned home. At night I would cry myself to sleep as I listened to her wheeze, gasp and cough.

Any number of times I resolved to end her suffering. I would make an appointment to euthanize and then she would rally. For days, sometimes weeks, she would be a happy, playful normal dog. Then she would hit the wall and we would begin the cycle again.

Eventually I vowed, “no more surgeries, tests or treatments.”

I would keep her comfortable and well cared for, and when the time came so be it.

A Sudden Race for Help

One day in January I came home early from the office.

It had started snowing, and I knew traffic would be a beast. The dog walker was away on vacation, and I didn’t want to leave Maggi home too long without checking on her.

When I got home she was waiting at the door, happy to see me. Her tail was wagging and she was ready for a walk.

We went around the block and she was actually romping, chasing snowflakes and rolling in the snow. We got back home and I gave her a treat, and she trotted to the window seat.

Next, I heard her wrenching and coughing. I found her on the rug by the door. She had collapsed, and white foam was pouring from her mouth and nose. She was gasping for air.

I scooped her into a towel, grabbed my keys and ran to the car. I drove to the closest animal clinic I could find. I ran into the lobby carrying Maggi, still struggling to breathe, a trail of foaming vomit behind us.

The receptionist took one look and asked if we were patients. I explained the situation, and she dashed to the back only to return and tell me the doctors on staff there were not equipped to handle an emergency like this one.

I darted back out and headed to the emergency clinic, which was four exits away on the crowded interstate.

I held Maggi on my lap and rubbed her tummy trying to reassure her. She was so scared — I was so scared! Finally, we reached the clinic and I raced inside.

This time the receptionist immediately called a tech, and Maggi was taken to an examining room.

By the time I finished the paperwork, the vet had examined her and called me back. Maggi’s airway had closed. The doctor sedated and intubated her.

She was not in pain, but she would need a tracheotomy, tests and possible exploratory surgery to determine what had closed her airway.

I explained Maggi’s medical history, and the compassionate veterinarian asked if I was ready to let go. I knew Maggi couldn’t survive another surgery. Holding on, hoping and pleading was my own selfish initiative. I nodded yes. It was time.

We waited until my daughter arrived, and she and I said our goodbyes. We stayed with little Maggi while the vet administered the lethal cocktail that would relieve my precious dog of her life.

The entire event took less than two minutes. She was sleeping and appeared to go in peace.

The Real Price of a Puppy Mill Pet

Maggi May was almost 5 years old when she died.

She had endured more than 15 surgeries and dozens of treatments that required sedation. Her medical bills totaled in the thousands. One vet told me that Maggi had lived because of my will and his skill. I do not doubt that.

Let me ask: What is the real price of a puppy mill pet?

The price Maggi paid was a lifetime of pain and suffering. She did not have a fighting chance, given her entry to life. For me it was an economic toll, but more than anything it was years of emotional agony and ultimate, heart-wrenching loss.

The “doggie in the window” tactic worked on me. I got caught up in the cuteness and I was impulsive.

It will never happen again — and if Maggi’s life meant anything, it was to provide me with a loud voice of experience: 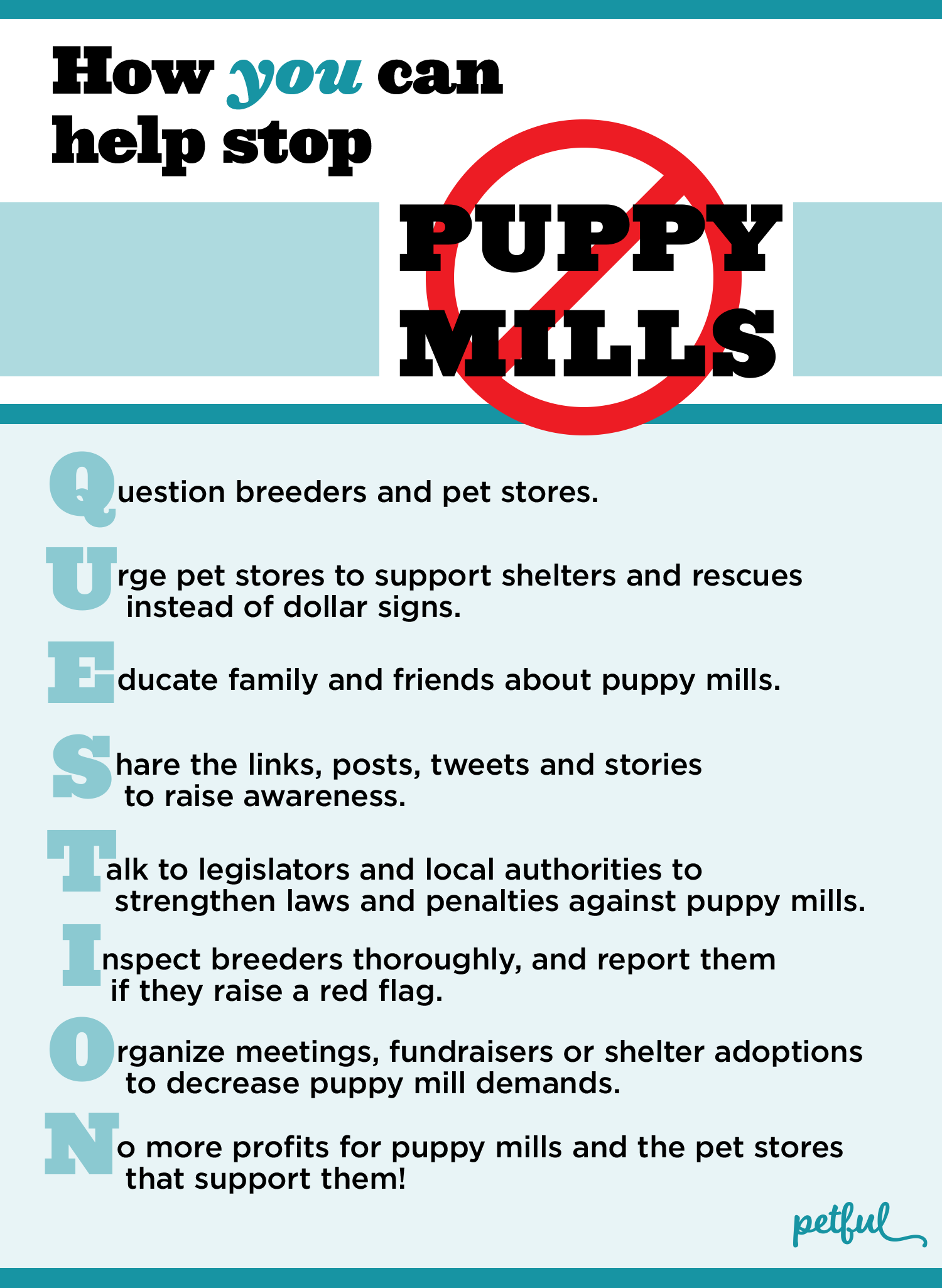