What makes your day?

For me, it was that my next patient was a Dachshund who had recently had puppies.

My childhood dog was a Dachshund, and my mother, aunts and cousins have all had Doxies, so with all those hours, days and months of wonderful time spent with Doxies, I find they’re a breed that can make me smile just by being what they are.

The client was worried about her dog, so away with my goofy smile and time to start thinking with a clear clinical head.

The Dachshund, Sasha, had had a litter of 4 gorgeous female puppies just 2 weeks before.

The puppies were all doing well and gaining weight nicely. Although their eyes had yet to fully open, the pups were beginning to realize they had paws and were attempting, in a wobbly way, to find their legs.

The client was worried about Sasha.

The previous day, one of the dog’s mammary glands had been rock hard, and the puppies were avoiding it. So the client was concerned about Sasha having mastitis.

What Causes Mastitis, and How Mastitis Affects Dogs

The word “mastitis” means inflammation of the mammary gland, of which the most common cause is infection.

This can happen when bacteria enter the teat and travel upward into the mammary gland. These bacteria can be those on the surface of the skin, from the puppy’s mouth or from the nest on which the mom lies.

Signs that a dog has mastitis include:

With puppies who are entirely dependent on Mom, anything that affects her health has a knock-on effect on them. Puppies can go downhill quickly, especially if they get cold (pushed away from Mom) or hungry.

Therefore, if a nursing dog’s health is in question, always play it safe and get her checked by a veterinarian.

If your dog has had puppies, you’ll need to be vigilant and step in if the mother seems off in any way.

This can be trickier than it sounds, because you’re also advised not to interfere too much, to let Mom get on with the job of nursing. If you disturb her too often, she may become unsettled and leave the litter.

Most mom-dogs will tolerate you picking up one puppy at a time if she can still see the puppy and you don’t move them far away.

To check if the pups are OK, plan to weigh them daily:

Also, from a respectful distance, watch the puppies nursing. Check out if each puppy has a favorite nipple that they prefer to feed from. Make sure each puppy gets a fair feed and that there’s no bullying and pushing litter mates off the nipple.

Does Mom seem comfortable and relaxed while feeding?

Tension or growling at a puppy indicates she’s uncomfortable, possibly because of scratchy claws against her skin, but mastitis might also be a possibility.

The most important factor is to keep the bedding area clean.

If the mama dog lies on soiled bedding, then it’s only a matter of time until bacteria get into her teats and cause an infection.

However, sometimes it’s also a cause of the puppies being a bit rough and nipping and tugging on tender places, causing inflammation, milk stagnation and infection.

It can also be a good idea to wash the dog’s belly, so as to reduce the amount of bacteria on her skin. But do this only once the pups are feeding well — they find their way to the milk bar using a sense of smell.

Likewise, if Mom is going to get distressed by having her tummy wiped down, then don’t press the point — leave her be.

The mammary gland was no longer swollen and was soft and floppy, just as a freshly suckled gland should be.

She didn’t have a fever, was feeding well and her poop was normal. In addition, her squirmy litter of 4 sausages were all thriving and doing well.

The most likely explanation for her symptoms of the previous day was that the gland had become engorged with milk. This can happen if puppies don’t feed from that particular teat for a while.

When you think about it, a female dog has 10 teats — and with 4 puppies, this means 6 of those teats may not get suckled at any one feed.

Once a lucky pup realized there was a super bounty ripe for the taking and suckled from the engorged gland, then the swelling resolved. But kudos to Sasha’s human for being vigilant and erring on the side of caution.

If Sasha did have mastitis, what would the treatment have been?

Here are some ways of dealing with or treating mastitis in dogs:

Happily, Sasha’s doing just fine, with no signs of mastitis.

This article on how mastitis affects dogs was written by a veterinarian, Dr. Pippa Elliott, BVMS, MRCVS. It was last reviewed June 1, 2018.
If you have questions or concerns, call your vet, who is best equipped to ensure the health and well-being of your pet. This article is for informational purposes only and is not a substitute for professional medical advice, diagnosis or treatment. See additional information. 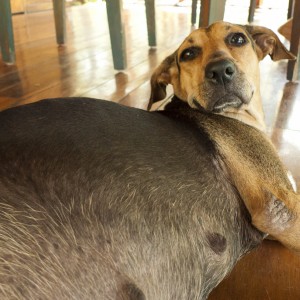 Pregnant Dog Care: What to Expect 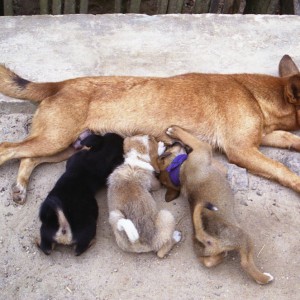 Can Dogs Recognize Their Parents? 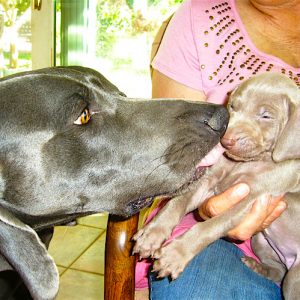 Milk Fever in Dogs: What You Need to Know 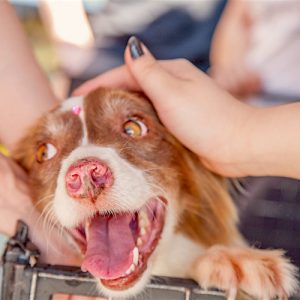 Your First 30 Days After Adopting a Puppy