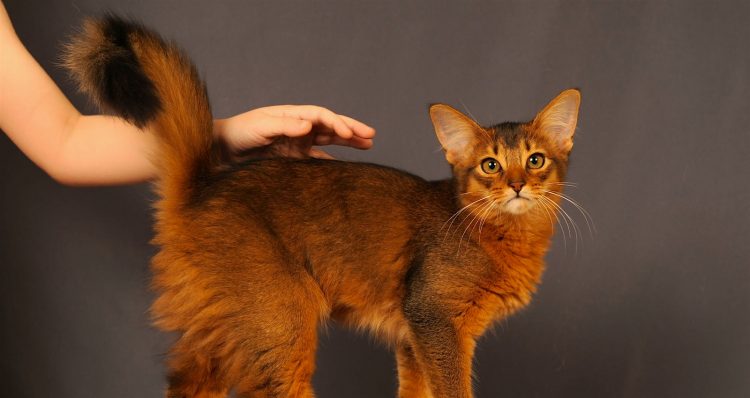 The Somali is a beautiful, medium-sized cat with a full, fluffy tail.

Some of the breed’s features resemble a wild fox, such as its large ears.

This muscular cat has large, expressive eyes that range from green to copper.

The ticked coat usually comes in ruddy, red, blue and fawn, although more color combinations are possible. The cat is named for Somalia and its connection to Ethiopia (formerly Abyssinia).

The Somali cat results from a recessive gene in the Abyssinian breed, so it’s basically a longhaired Abyssinian.

Its origin is a mystery: Some believe the breed was a descendent of ancient Egyptian cats because it resembles old drawings and paintings, while others believe British soldiers brought the cat back after the Abyssinian war in 1868.

After being developed and refined in Britain, the breed made an appearance in the United States in the early 1900s. The cat was shown and quickly became an American favorite.

The breed was recognized by the Cat Fanciers’ Association (CFA) in 1979.

Somalis are alert, curious, intelligent cats who love to play.

They are also quite affectionate with their humans, and homes with kids are great for keeping a Somali entertained.

Be warned, though — Somalis are high-energy and high-curiosity cats who are constantly attracted to movement and their surroundings.

LOW: Somalis are pretty active cats and don’t have any special exercise needs. Feed a quality food and use toys and playtime to keep your cat active.

Need more suggestions? Check out our list of ways to exercise your cat.

LOW: Grooming is minimal with this breed. A weekly brushing is recommended, along with toothbrushing and nail trimming.

Declawing is not recommended by us or cat clubs. The toes have hair in between, so check for dirt and debris and trim as needed. It also helps to clean the large ears to keep them healthy and avoid infections.

MEDIUM: Somalis are a pretty healthy cat breed, but these cats do have some common health problems, such as:

Although not confirmed, some websites mention dental problems as another concern. Be sure to pay special attention to the teeth if you have or adopt this cat breed.

Have you ever seen a cat enjoy getting brushed this much?

If you consider getting a Somali, please check adoption resources — even purebred cats can end up in shelters and rescues. Try Petful’s adoption page.