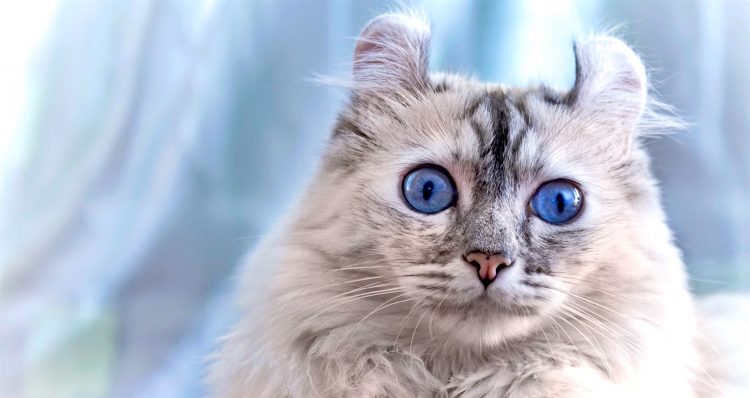 The American Curl is a medium-sized cat with unique curled ears that give the cat an alert appearance.

The ears are not curled at birth but begin curling within 3–5 days. The ears complete their transformations in about 16 weeks, and the curl can vary from almost straight to having a curl with an angle of 90–180 degrees.

The body is rectangular with a rounded head and walnut-shaped eyes. The coat can be short or long, although both varieties are soft and silky with very little undercoat.

The coat patterns and colors vary, and the longhaired version has a large, plumed tail.

2. Where American Curls Came From

Native to North America, the American Curl was discovered in 1981 in California after a stray kitten with a long, black coat and curled ears appeared on the doorstep of Joe and Grace Ruga.

They named her Shulamith, and a few months later, she had her first litter.

Half of the 4 kittens had the same curled ears as their mother, and the breed was established. All of the American Curls trace back to Shulamith.

3. How Friendly Are American Curls?

American Curls are affectionate, curious and intelligent. They act like kittens well into their adulthood, and thus are nicknamed the Peter Pans of the cat world.

They adjust quickly to other animals, children and situations. They tend to follow their humans around as a dog would.

Curls are not overly talkative or noisy cats, but they are known to communicate through their trills. This cat breed is very people-oriented and can be clingy.

LOW: American Curls do not have specific exercise needs beyond those of regular cats. They are usually active and love to play with toys. Keep yours indoors to avoid injury to them or to keep them from straying away from home.

If you notice weight gain, it’s a good idea to have your American Curl checked out by a veterinarian. Contact your vet if you notice a decrease in activity or mobility, which could be a sign of a health problem.

MEDIUM: Brush your American Curl weekly, regardless of the coat variety — although the longhaired coat may require slightly more grooming. Since an American Curl’s undercoat is light, shedding is minimal.

Cats should have their teeth brushed daily and nails clipped as needed.

Check the ears for drainage and debris, and clean them as needed. But be careful not to bend your American Curl’s ears too much — although the ears are curled, they are not soft and may not bend easily.

LOW: This breed is free from defects and does not have any notable health problems other than those affecting all breeds of cats.

As the book Ultimate Cat: A Complete Guide to Breeds and Hybrids puts it, “You might think that a breed such as this would have a few genetic health problems, but American Curls are healthy creatures with a robust constitution.”

One possible health concern is narrow ear canals. You may need to “remove any wax or dirt accumulation from the ear to help prevent discomfort and infection,” according to International Cat Care.

Check out the American Curl in this quick video:

5. Where to Adopt an American Curl

Yes, purebred cats do end up in rescues and shelters. So if you’d like to get an American Curl cat or kitten, check adoption resources first by trying Petful’s free adoptable pet search.

If you go to breeders, please do your research and beware of the warning signs of a kitten mill (a puppy mill, but with kittens).