The heartbreaking note attached to the cat carrier contained just a few sentences, yet told a heavy story:

“Please take care of Haku. He means the world to me and my family. I had to bring him here because he fell from a window and we sadly cannot afford his medical bills.… Haku has two broken legs … also he has asthma.… Nobody wanted to see Haku in pain this way.… Please forgive me. I wish I can give him the best life but I hope you can. Thank you.”

The carrier had been left at the front entrance of the ASPCA Adoption Center and Hospital in Manhattan in late August. Inside was a peaceful 6-year-old, gray-and-white male cat.

Security video showed an unidentifiable person leaving the carrier at the doorstep. With no owner information, the hospital’s manager of client services, Jessie Pizanias, admitted Haku as a stray so the cat could receive immediate medical care.

“These were classic high-rise injuries,” explains Dr. Gilbert, who stabilized Haku and provided him with oxygen, hydration and pain medication.

X-rays confirmed that 2 of his legs were broken, while thoracic radiographs verified his asthma.

He also suffered from a jaw fracture and a split palate. Haku was unable to eat because of his jaw injuries, so a feeding tube was placed in his neck. 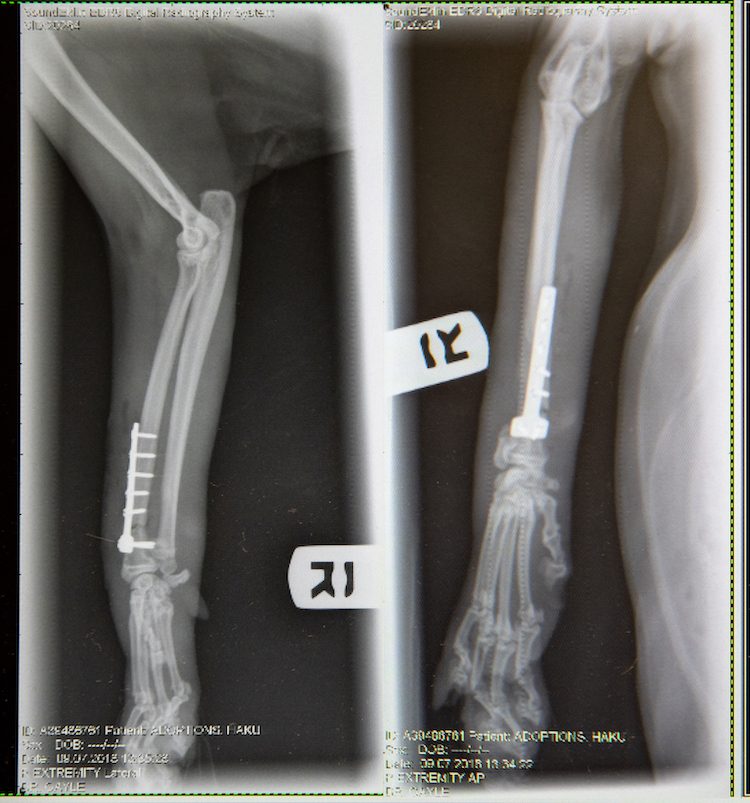 “The most important thing in the beginning was figuring out everything that needed repair,” recalls Dr. Gilbert.

“After stabilizing him, we came up with a plan for the multiple procedures he would need.”

“I knew he would be a big project — he was just so broken,” adds Dr. Melanie Glass, an AAH veterinarian who noticed Haku in the hospital’s intensive care unit.

“But he had survived so much, so I thought, ‘Let’s give him a chance.’”

Dr. J’Mai Gayle, director of surgery, repaired Haku’s right front fractured legs and applied stints to the other legs. But despite enduring so much suffering and several procedures, Haku remained tranquil.

“Even upon arrival, he was calm, but he must have been in tremendous pain,” says Dr. Gilbert.

While in ICU, Haku was “perfectly behaved,” explains Dr. Glass. “He loves to roll around. You could tell he was once really loved; he is very social.”

Not all cats that fall from high distances fare as well as Haku did.

And while this tragedy — sometimes called high-rise syndrome — is completely preventable, the ASPCA has seen 59 cases so far in 2018.

The ASPCA urges people to install snug and sturdy screens in all their windows, even those with childproof window guards, because cats and small dogs can easily slip through those bars.

A Long Road to Recovery

Haku’s recovery took time. His front leg was splinted for 5 weeks and his hind leg for 8.

After 2 weeks, his feeding tube was removed, and he was able to eat again on his own.

Veterinarians report that Haku was very cooperative through bandage and splint changes, and as he started feeling better, he began to come out of his shell.

To help Haku recover, Dr. Glass took him home as a foster.

One weekend, Dr. Felicia Magnaterra, an ASPCA Adoption Center veterinarian, was cat-sitting Haku and witnessed him suffer an asthma attack.

“It looked as if he was using his abdominal muscles to breathe,” says Dr. Magnaterra, who whisked Haku to an emergency veterinary hospital. “Thankfully, I was well aware of his history.”

After their return, Dr. Magnaterra administered a course of oral steroids. Within 2 days, Haku’s asthma was under control.

“He is such a resilient boy,” says Dr. Magnaterra, who managed asthma in one of her own cats before becoming a vet. “From a veterinarian’s standpoint, treating feline asthma is very rewarding because it can be successfully managed.”

A Happy Ending for Haku

Among other things, Haku means “crown of fresh flowers” in Hawaiian.

“It’s a perfect name for him,” says Dr. Glass. “It sounds soft and mellow, very serene. And he’s such a gentle soul.”

Dr. Glass was so taken by Haku that she called her sister in Sacramento, California, hoping to make a match.

“When I met Haku, I called my sister and said, ‘I have a cat for you,’” Dr. Glass says. “Her geographic location is ideal for asthma patients, and she was open to it.”

Haku will be transported to Sacramento in December, just in time for the holidays. Then, Haku will be far away from not only New York City, but also a tragic past to which he’ll thankfully never have to return.

This article was written by Anita Kelso Edson, who has been on the Media & Communications team at the ASPCA for more than 12 years. In her previous role, Anita spent 6 years as director of publicity for the SPCA of Texas in Dallas.