You know that cute picture of the kittens in the yarn basket? Well, there’s nothing cute about it.

Cats love to play with linear objects of any kind, and not a year goes by when I’m not cutting into intestines removing what is known as “a string obstruction.”

String obstructions are more dangerous than a simple foreign body obstruction (mouse toy, for instance) because of what the string can do.

The cat can swallow the string, but some of it often gets caught underneath the tongue. The rest of the string goes down into the GI tract and gets stuck in different sections, causing an accordion-like effect.

The surgery to correct these obstructions can be difficult.

In the worst cases, multiple sections of intestine have to be cut into or even removed. If these obstructions go undetected, the string can cut through the intestine like a saw, and the infection this causes can be fatal (peritonitis).

String Obstruction in a Cat: Often Not Obvious

Many people don’t see their cat playing with or ingesting the ribbon or string.

They only know that they have a “sick” cat. The symptoms can be vague to severe: vomiting, lethargy and anorexia to name a few.

But because cats can vomit at the drop of a hat, the symptoms can be confusing.

X-rays can be suggestive of a string obstruction, but they don’t always give us a definitive diagnosis.

Once in a while, I actually find the string under the tongue, so I know I have to take the cat to surgery. You can’t simply cut the string and pull, because you will do more injury to the intestines.

It is more typical for a young playful cat to swallow a linear object, but I have found many older cats with obstructions too.

These can be diagnostically challenging because the person may not see such a noticeable difference in their 10-year-old cat who spends most of the day sleeping anyway.

Need to Go to the Vet?

If you are not sure if your cat needs to go to the vet, try to get a clear idea of their behavior when you call your vet.

Separate the cat if you have a multi-cat household, so you can determine if the kitty is eating, defecating, vomiting and so on. History helps your vet tremendously:

Now you have a lot of information to give your vet.

Again, if you have a cat who is extremely lethargic and vomiting continuously, don’t mess around — just get that cat to the vet.

Keep reading, because next I’m going to share a really good story about a kitten who got into a whole bunch of trouble…

The Story of Pumpkin, a Kitten Who Swallowed Strings, Hairbands, Pretty Much Everything…

Pumpkin was a 5-month-old orange boy kitten with a penchant for eating everything.

He commonly played with hairbands, strings, paper, anything.

One day, I got a call from Pumpkin’s frantic human. She had seen Pumpkin eat her hair tie, ornament and all, and the kitten had been vomiting ever since.

Now, Pumpkin was not my patient. The woman had brought him straight to the emergency hospital because his vomiting was intensifying.

The emergency hospital had done bloodwork, an ultrasound, given lots of medicine to try and control vomiting, but they hadn’t done one thing: They had not removed the foreign object from the kitten’s intestinal tract.

And they had not taken a simple X-ray that would have confirmed he needed surgery.

By now, the woman had paid the emergency hospital $800 and was told that yes, indeed, her kitten needed surgery.

I told her to come on over with Pumpkin to my clinic, and we would see what we could do.

Surgery to Remove the Hair Tie From This Kitten’s Stomach

Pumpkin came in with his little IV in his front leg appearing quite sad indeed. His belly was hurting, and his head was hanging.

After some deliberations with his mom, we were able to take Pumpkin to surgery.

During the surgery, I found the hair tie stuck in Pumpkin’s stomach, with lots of hair attached to it, traveling down his intestines and causing a string obstruction.

His intestines were bunched up into a knot, causing his pain and vomiting.

After cutting into the stomach and the intestine, I removed the hair bob, the long hair (now looking more like that wad of hair you take out of the tub) — and, shazam, Pumpkin woke up feeling like a kitten again.

The Bag of Shame

Whenever we remove a foreign body from a pet, we try to clean up the item a bit so our clients won’t barf at the sight of it, and place it in a plastic bag for them to see what cost them hundreds of dollars to remove.

For 20 years, we have taped these little bags of gastronomic shame on the outside of the pet’s cage so we don’t forget to show them. Most people want to see what their pet ate.

Truly, Pumpkin was feeling great about 4 hours after surgery. It was the end of the day and I was doing my sweep of the hospital, checking the medical board, the patients, the computers. I checked out Pumpkin, and there was a little plastic bag in the middle of his cage.

He was ignoring it. I was staring at the empty bag and he was looking at me as if to say, “What are you looking at, witch? I’m just sitting here minding my own business with this annoying IV in my arm.”

Then it hit me. It was the bag with the hair tie and the big ugly ornament on it. And now the bag is EMPTY.

Where the BLANK is the ugly hair tie?!

I bomb over to the cage, and now Pumpkin looks at me like I really am nuts.

I rummage through his blankets and little water bed and … THERE IT IS!

Pumpkin had buried the hair tie, in its entirety, in his blanket. But at least he didn’t re-eat it. 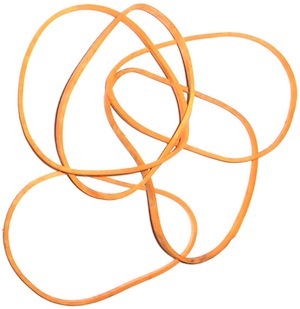 The look on his face said that he couldn’t possibly have used his little paw to detach the baggie from the surgical tape holding it on the cage, pull the baggie through the cage bars, open said baggie, remove its contents, and, thank the Lord, not eat them again.

I removed Pumpkin’s hair accessory from his playpen, gave him some chicken and rice, and let him think about his evil doings in a time-out for a while.

I checked the kitty after my own chicken and rice dinner (Chinese takeout.) He was happy and sleeping, but his IV pump was beeping.

Pump had become tired of the pump — his IV pump, that is — so he removed it. By himself. No need to wait for doctor’s orders.

But where was that little connector piece connecting the catheter to the line?

Pumpkin, where is it? You didn’t eat it, did you?

Another rummage through blankets, and I found out Pump had just been playing hide-and-seek with the plastic connector, not making a happy meal out of it.

Pumpkin is one of those kittens who would, I’m afraid, eat just about anything.

Before I could rest easy that night, I gave the kitten a chew-proof cat bed, removed every bit of  IV line from him and his cage, and removed all objects within a paw’s reach of his bars. He was in chew-proof kitty jail until he went home the next day.

The Moral of This Story

After returning home, Pumpkin is doing great, and his mom was made well aware that he is on a kitty suicide mission every time he sees or plays with something that could fit down his throat.

If you find yourself in a similar situation at an emergency hospital with your pet, see if you can contact your own vet to discuss what is going on.

Emergency hospitals are life-saving institutions, but they are not always streamlined when it comes to diagnostics. Nor are emergency visits  streamlined on your pocketbook.

In my opinion, Pumpkin’s GI obstruction was obvious from the history and symptoms:

This would have saved the kitten a lot of pain, removed the risk that the obstruction would cause further harm — and saved his pet parent a lot of money.

This pet health content was written by a veterinarian, Dr. Debora Lichtenberg, VMD. It was reviewed for accuracy by Dr. Pippa Elliott, BVMS, MRCVS, and was last updated Oct. 11, 2018.