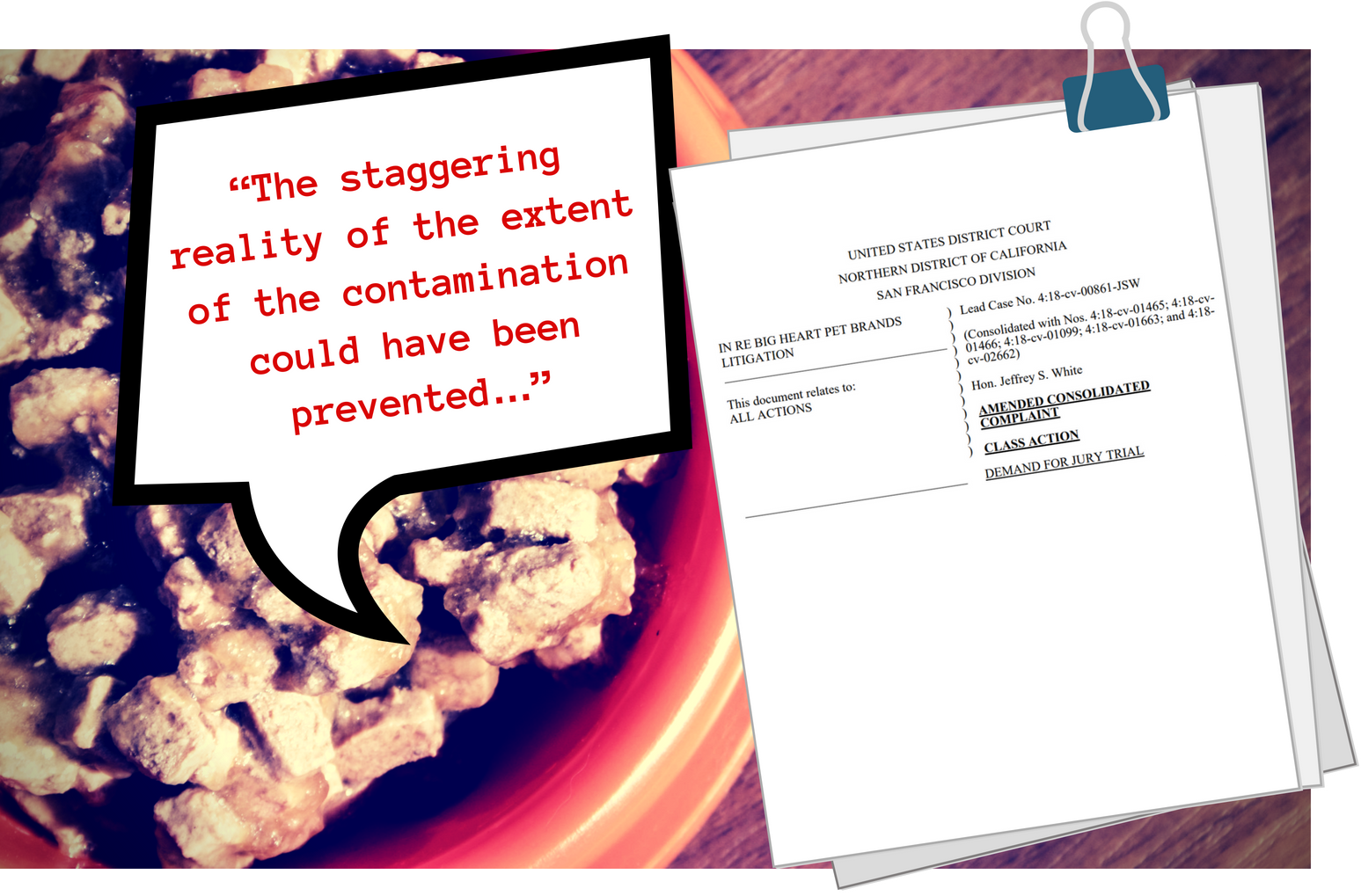 “Jaw-dropping allegations” have surfaced in the wake of a class-action lawsuit against Big Heart Pet Brands Inc., owned by the J.M. Smucker Co., maker of iconic dog food brands such as Gravy Train, Kibbles ’N Bits and Ol’ Roy.

The lawsuit was filed following February’s massive dog food recall after traces of a euthanasia drug were found in some cans and pouches of the food.

Originally, the suit was filed to hold Smucker accountable for the pentobarbital found in the dog food. The “master consolidated complaint” was updated in May, and then again on June 14, to claim that the company not only lied to consumers but also knew the dog food was dangerous.

According to the June 14 amended suit, a number of dogs died after being fed the tainted food. One man alone lost more than a dozen dogs, including a litter of 10-month-old puppies.

Class members (victims) joining the lawsuit could eventually “number in the thousands,” according to a case management statement filed July 13.

Dr. Karen Becker, DVM, who has been following the case on her blog, described the claims as “jaw-dropping allegations of pet food manufacturer misconduct,” positing that “it seems likely Smucker knew it was selling dog food contaminated with pentobarbital.”

The recall of tens of millions of units of wet dog food earlier this year — which Smucker at first insisted was a “voluntary withdrawal” but which the U.S. Food and Safety Administration (FDA) clarified was really a recall — followed an explosive investigation by WJLA-TV that discovered traces of pentobarbital, a powerful sedative often used to euthanasia animals, in tested cans of Gravy Train dog food.

The FDA calls pentobarbital “an illegal substance” that “should never be present in pet food … [in] any amount.”

After the Washington, D.C.-area TV station released its major scoop, Smucker claimed it was “confident in the safety of our products and do not believe you [a consumer] need to take any action at this time,” and that pentobarbital is “not something that is added to pet food. However, it could unintentionally be in raw materials provided by a supplier. We regularly audit our suppliers and have assurances from them about the quality and specifications of the materials they supply us. Raw materials that include pentobarbital do not meet our specifications.”

Later, the company apparently removed those statements from its press releases — and also removed a statement claiming it follows AAFCO standards.

What Did Smucker Know?

Did the company know it was selling contaminated food and continue to do so anyway?

Smucker claims to use a “rigorous supplier approval process” and purchases ingredients only from “reputable suppliers,” the lawsuit states. The company also claims that once a supplier is chosen, there is “a comprehensive testing program is in place to assess the safety and quality of the ingredients upon receipt. This includes a combination of laboratory analysis and physical inspection of the ingredients.”

This statement is key, because as the suit points out, if there really is such a process in place, then Smucker kept and used the tainted animal fat even though the ingredient should have tested for alarmingly high levels of pentobarbital.

So, either there is no such testing process in place for suppliers — or Smucker knowingly and “recklessly” used the contaminated ingredient in its dog foods.

Supplier’s Past History Should Have Raised Red Flags

The animal fat is said to have come from supplier JBS USA Holdings, Inc. and its MOPAC rendering facility in Pennsylvania.

According to the lawsuit, “JBS knowingly works with meat by-product recycling, including animal byproducts not suitable for human consumption. In fact, it is publicly disclosed that MOPAC has accepted euthanized horses.”

MOPAC’s own website says it collects and renders expired supermarket meats and other “waste products not suitable for human consumption.”

Moreover, the lawsuit states, “JBS has been plagued by investigations, recalls, and other red flag situations that should have alerted [Smucker] it needs to confirm the safety, quality, and reputation of JBS and the product purchased from JBS.”

The suit lists several examples of past problems, including instances of potential E.coli contaminations and accusations of inhumane treatment to slaughterhouse animals.

Despite assurances from Smucker that unsafe pet food has been recalled, “consumers are still able to purchase the Contaminated Dog Foods from stores and online merchants,” the amended lawsuit says, adding that in early June some of the products were available for sale on a major store’s website.

“Thus, consumers who are unaware of the recall are able to purchase the Contaminated Dog Foods without receiving any notice that the dog food has been recalled or is adulterated at the time of purchase.”

In fact, in mid-July — half a year after news first broke about the Gravy Train recall, one of the biggest U.S. pet food recalls in years — Petful found a can of Gravy Train With Chicken Chunks with one of the recalled UPC numbers in a local store here in Brooklyn, New York.

Asked about it, the store clerk replied that he was unaware of any recall.

Where Was the FDA?

The lawsuit addresses this as well, saying, “Historically, the FDA has not aggressively taken action … against the pet food companies that it found to have used non-slaughtered animals and sold pet food containing pentobarbital.”

Ultimately, though, according to the FDA, “It is the responsibility of the manufacturer” — such as J.M. Smucker — “to take the appropriate steps to ensure that the food they produce is safe for consumption and properly labeled.”

Meanwhile, the FDA’s investigation into the pentobarbital adulteration is ongoing — and has been stymied by Smucker along the way. Food Safety News reported recently that, “on instruction from the Smucker corporate headquarters,” employees have refused to give FDA inspectors access to some of the documents, samples and consumer complaint files they’ve asked to see.

What’s more, “the Plant Director, Dave Brookover, also declined to sign, or even to read, an FDA Affidavit (FDA Form 463a) setting out the information supplied by him during the course of the inspection. On instructions from the corporate office, Brookover left the room when the FDA investigator recited the contents of the Affidavit.”

What’s Next in the Smucker Class-Action Lawsuit

The class-action suit, called In Re Big Heart Pet Brands Litigation, will be decided in the U.S. District Court’s Northern District of California, San Francisco Division. A hearing on the defendant’s motion to dismiss is set for November of this year — and if that is unsuccessful, a trial is anticipated in fall 2020.

The suit accuses Smucker of negligent misrepresentation, false advertising, fraud, and deceptive and unfair trade practices, among other allegations. Plaintiffs are seeking a jury trial.

In late June, Judge Jefferey S. White granted an order discovery of electronically stored information — which allows the plaintiffs limited access to the company’s emails and internal memos after the scandal broke.

This could get very interesting.

This article was written by Dave Baker and Melissa Smith.