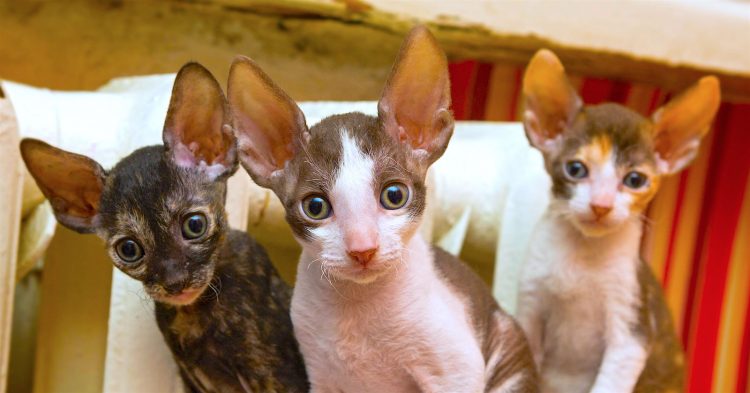 The Cornish Rex is a medium-sized cat with a soft, short, very fine coat that feels like crushed velvet.

The small head is flanked by large ears and features large eyes.

The body is slim and muscular with long legs, a curved back and a long tail.

The cat’s overall appearance is elegant and sophisticated, resembling a Whippet. Coat colors and patterns vary greatly in this agile and active cat.

2. Where Cornish Rex Cats Came From

A litter of kittens was found in a barn in Cornwall, England, in 1950.

One of the kittens, a male named Kallibunker, was born with short, curly fur believed to be the result of a mutation caused by radiation from the local tin mines. Kallibunker was mated back to his mother to produce additional offspring.

The Cornish Rex was brought to the United States in 1957, and the breed obtained Cat Fanciers’ Association (CFA) championship status in 1964.

3. How Friendly Are Cornish Rex Cats?

Don’t let the sleek, aristocratic appearance fool you. The Cornish Rex is one active and goofy cat.

These cats stay in kitten mode most of their lives and well into their senior years. (Fun fact: One Cornish Rex reportedly lived to 37 years old.)

The Cornish Rex is an active and playful cat who loves to play fetch, catch and throw small toys. They are extremely affectionate cats and love to be around people — so much that they might demand attention and companionship.

Curiosity and intelligence are also characteristics of Cornish Rex cats, as well as the ability to adapt quickly.

They make a great companion for children. Most Cornish Rex cats love having a playmate, but some prefer to be the only cat. They can get along with other household animals.

Their physical activity should be similar to that of most cats, although they are typically more active and playful.

Contact your veterinarian if you notice a decrease in activity or mobility — that could be a sign of a health problem.

MEDIUM: The short coat of the Cornish Rex does not shed much. Despite the short coat, the cats are not hypoallergenic. They reportedly don’t aggravate allergies as much as other breeds but may still cause symptoms.

Bathe your Cornish Rex regularly — these cats don’t have an outer coat to absorb natural oils.

Trim the cat’s nails as needed (usually once every 1–2 weeks), and clean the ears and teeth to promote good overall health.

Pay special attention to the ears. Cornish Rex cats have large ears and can experience problems without proper grooming.

MEDIUM: Cornish Rex cats are sensitive to certain anesthetics. Talk with your veterinarian before having any procedures done and discuss local anesthesia or other options to minimize risk.

Occasional heart and thyroid problems are possible. Cornish Rex cats tend to overeat, so pay special attention to the amount of food provided to control their weight.

Because of their short coats, dermatological issues are also possible.

5. Where to Adopt a Cornish Rex

If you’re considering a Cornish Rex for your next pet, please check adoption resources — even purebred animals end up in shelters.

Try Petful’s own pet adoption search page. (You can filter your results by breed and ZIP code.)