Cleo was a fluffy calico with an only-child complex. After all, she had been there first. She kind of liked Max, the Maine Coon with the lynx-like face, but she wasn’t happy about the 3 cats who had shown up after him, especially Chloe.

Chloe was an equally fluffy gray cat with a strong presence. She clearly saw herself as the top cat in the household and felt that the other cats should see it that way, too.

Tensions among the cats had escalated, and Cleo had taken to spraying in the living room. Spraying is, of course, how cats mark territory. We usually think of it as a tomcat thing.

But the truth of the matter is that female cats will spray, too, and for the same reasons. Cleo was letting Chloe know that the living room was hers, thank you very much. 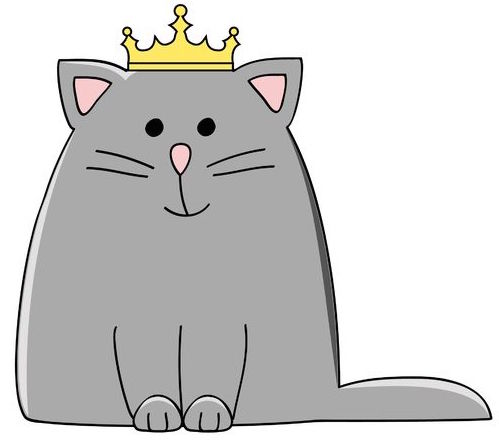 All Hail the Queen

Cats are, as we’ve seen, far more social than they’ve been given credit for. They have their hierarchies, which shift as cats leave or join the group. And at the top of that hierarchy, you will almost inevitably find a female cat.

“Perhaps the most striking and influential feline structure is that between female domestic cats,” observes veterinarian Jacqueline C. Neilson.

“In free-ranging domestic cats, a matriarchal structure exists, with adult females forming the lineages of related females and their offspring. A large group of cats (colony) may support several female lineages, with the largest lineages securing the best of the available resources.”

Queens band together: They play midwives to one another and raise kittens together, as the documentary Caressing the Tiger showed in 1991. In fact, they’ll even nurse each other’s kittens. They will also drive away tomcats or any other intruders who might pose a threat to their offspring.

An unspayed cat is something of an Amazon when it comes to sex: She calls the shots and “selects her mates,” says cat behaviorist Diana Korten. “When she goes into heat, her trilling and her physical postures and pheromones may attract many Toms who may fight for her, but she is not obliged to mate with the winner.”

Head of the House

Domestic cats don’t differ all that much from their feral counterparts in this respect. The same hierarchical setup is still present, and yes, it’s usually a matriarchal one.

In our household, a female cat has always been in charge. And the catnip mouse has always been passed on to another female, although not necessarily to one who’s related.

When our grand old lady Kilah was dying of cancer, 3 other strong-willed females were eyeing the throne: Keisha, Kilah’s adopted blue-tortoiseshell daughter; Star, our uppity Sealpoint Siamese; and Celtie, a master strategist in a Red Abyssinian suit. The male cats weren’t even in the running.

In the end, Keisha won and ruled the household with an iron paw for the next 7 years. When she died, Phoebe the Fluffy took over.

Sometimes the transitions aren’t so seamless, and a particular female may have to be segregated. Sometimes it’s an aggressive female; other times it’s a timid one who is terrified of the aggressive one.

This video shows a house cat meeting a new kitten, but the kitten isn’t intimidated:

Forget The Lion King, Kimba the White Lion and all the others. The lionesses are really in charge.

Just like their domestic cousins, they raise their cubs and hunt together. They can even, according to the San Diego Zoo, “switch hunting jobs depending on which females are hunting that day and what kind of prey it is.”

Young males are driven away from the pride as they reach adulthood. After all, the pride only needs one lion to father cubs, take down the really big prey and protect it from other lions trying to seize control.

Interestingly enough, the Egyptian goddess Bast started out as a lioness or a lioness-headed woman warrior. Later, the warrior role was taken over by Sekhmet, another woman sporting a lioness’s head, and Bast evolved into the cat-headed goddess we’re familiar with today. The ancient Egyptians may have been closer to the truth than they realized.