Editor’s Note: This article was written by Heather Clarkson and originally appeared on her blog, Dog Hair & Bourbon. It appears here with permission and has been edited.

Rescuers know it well — what started as a brilliant method for sharing dogs in need and using well-meaning volunteers has effectively become what many of us will consider the biggest thorn in our sides.

Facebook — social media in general, really — is responsible for the lives of thousands of animals that would have never made it out of the shelter alive. Suddenly, low-budget shelters with no ability to share photos and information of the dogs in their facilities gained a free platform to spread the word about their strays and adoptables.

I know I’m looking a gift horse in the mouth. Facebook is wonderful; Facebook users, not always so. What was once a blessing has turned into chaos and frustration. Many rescuers, myself included, have started avoiding social media due to the pandemonium it creates.

At one point (I’ve worked hard to rectify this situation), you could look at my personal Facebook page and legitimately think I was a dog. There were no pictures of me — just dogs! Dogs, dogs, dogs! Not even my dogs, but dogs of every make and model all across the country that somebody, somewhere thought I needed to be aware of.

Fortunately for me, I do have a social life and employers, and I would rather them see pretty little ol’ me on my Facebook page, not some hound dog in Florida.

There is a right and a wrong way to use social media for the benefit of everyone — rescues and dogs alike. Unfortunately, many people have come to see social media as a way to feel needed and important. They have a purpose in life, even if it’s just sitting on their couch tagging everyone in kingdom come in a shelter dog’s picture. That, my friends, is the wrong way.

And below, I explain this in more detail, as well as things you can do to actually help your local shelter dogs and rescues.

If your Facebook name includes “Cross-poster” or “X-poster” or anything similar, don’t request to be my friend. I’m going to deny it.

Why? Because I really don’t want to get 50 notifications a day from you, tagging my name on pictures and sharing dogs on my wall. That’s my Facebook page! For me! Plus, chances are, I already know about the dog if it’s the type of dog I rescue. It has probably been emailed to me 5 times by 10 a.m., the shelter has probably already called me themselves to ask for my help, and I do check all the shelter pages myself.

Another issue I have with rampant cross-posting is that it scatters the information to the wind. Every thread has a different set of comments, and nobody ever checks the original thread for updates. I’ve all but ceased posting updates on dogs on Facebook because nobody pays attention.

Also, if I’m rescuing a dog, letting everyone know the status on Facebook is not my first priority. Believe it or not, coordinating with the shelter and local volunteers personally is my priority. And my guess is, any other serious rescuer trying to help that dog is probably doing the exact same thing, so they don’t need to see it on Facebook either.

Cross-posting these days does little more than create hysteria surrounding shelter animals. It feeds off the over-emotional users who aren’t checking the facts before posting, and frankly it’s making our lives (rescuers and shelter workers) more difficult.

Panic does not solve problems — coordination and action does.

If you can’t help, that’s fine, but stop cluttering threads with your sentiment.

I can look at a thread for a shelter dog with 40-something comments, and not a single one will actually be offering to help — they’re all just cross-posters tagging names and people saying, “Oh my, look at that baby, what an angel, I wish I could help.” You’re just trying to make yourself feel better about not helping, and nobody needs to see that.

Similarly, stop finding dogs in shelters that are a 5-hour drive from you, and posting, “I’ll take this baby but I can’t drive.” What a HUGE help you are. Unless that comment is followed by, “But I’ll pay to have the dog boarded and transported to me,” you just need to stay out of it.

Frankly, I think that any group who relies on the word of some random person on Facebook committing to adopting a dog and pulls that dog under that assumption is just asking for a world of trouble.

I’ve done it once, and lo’ and behold, guess who got stuck with a dog? Mmmhm. Fortunately for that dog, I don’t back out on my commitments, and she came into my own rescue program. Not every rescue abides by those same standards, however (and that is a topic for another day).

This one really irritates me.

Unless that someone who “NEEDS to save this dog” is you, keep your dang mouth shut. Because at that point, you are taking it upon yourself to place responsibility on others beside yourself — and that, my friend, is a load of bull.

If you’re not willing to get off your butt and do something yourself, don’t expect someone else to do it.

3 Things You Should Do More Often

Whether I agree with rescues pulling based on pledges and sponsorship or not, the fact is that many do. Especially with dogs in the South, where heartworm disease is rampant, many rescues can’t afford to take dogs whose vet bills will run in the multiples of hundreds. The adoption fees will never cover the treatment, and that’s a surefire way to run a rescue into the ground — take dogs you can’t afford.

However, when dogs get pledges and sponsorships, doors open. That money can go toward vetting and/or transportation (because many Northern groups use professional transportation services), and it actually can be the difference to whether or not a dog lives or dies.

We all have little things we spend money on that we don’t need. If forgoing that daily latte means you can donate 20 bucks a week to getting shelter dogs out and to rescue, why wouldn’t you? 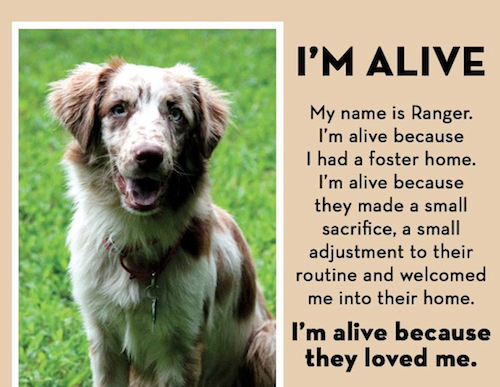 2. Get Off Your Butt

Seriously. Get off your butt and out from behind the computer. FOSTER.

Fostering is not that hard, really — I promise. Even if you’re just a temporary foster who holds animals for transport, you’re saving 2 lives — the animal you’re taking home and the animal filling its space at the shelter. Most rescues cover all expenses for fosters, and anything they don’t cover is tax-deductible.

You’ve all seen that meme that floats around Facebook with the cute dog that says, “I’m Alive — Because I Had a Foster Home.” It’s as simple as that. Fostering saves lives, more than anything else.

If you genuinely cannot foster, there are still other ways to help. Drive for transports, evaluate dogs in your local animal shelter or take pictures of their available animals. Become a general volunteer for the rescue of your choice and call references, help with data entry, do home visits and help at local events.

The folks who run rescues have jobs, lives, families and a million things to do that actually have nothing to do with rescue, on top of what rescue responsibilities they have.

You have no idea how wonderfully helpful it is to have somebody help us with the little things.

Finally, we all have skills. A lot of rescues could really benefit from those skills. If you’re good with a computer, web design, graphic design, etc., offer to help build a rescue’s website or design a snazzy logo for them. I am so lucky that I have both a graphic and a web designer on my board. Because of them, my rescue’s stuff looks pretty awesome.

Not all rescues are that lucky, and they definitely don’t have the budget to pay someone to do it. If you’re a good photographer with a decent camera, offer to take pictures of foster dogs or dogs in shelters. A picture is worth a thousand words, we know, and it has been proven that better pictures get animals adopted faster.

Your skills could be used for just about anything. If you’re an accountant or a bookkeeper, offer to help with records. If you like to sew, make collars or beds that can be donated to shelter dogs or sold at events.

In fact, 2 of my volunteers make tutus in their spare time for us to sell tutus! The list goes on. 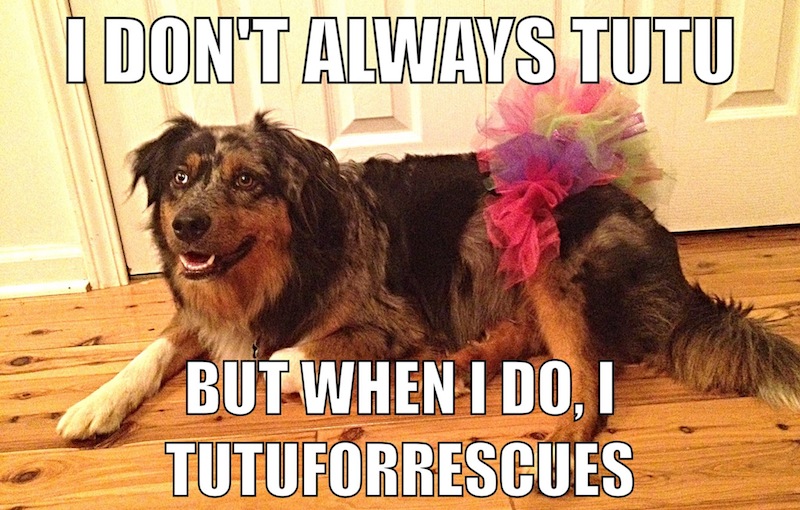 Heather Clarkson, 24, founded a dog rescue for herding breeds last year. Her current foster pets include a Great Dane, a Doberman, a deaf cattle dog mix and an Australian Shepherd. This article originally appeared on her blog as “The Love/Hate Relationship of Social Media and Rescue.”