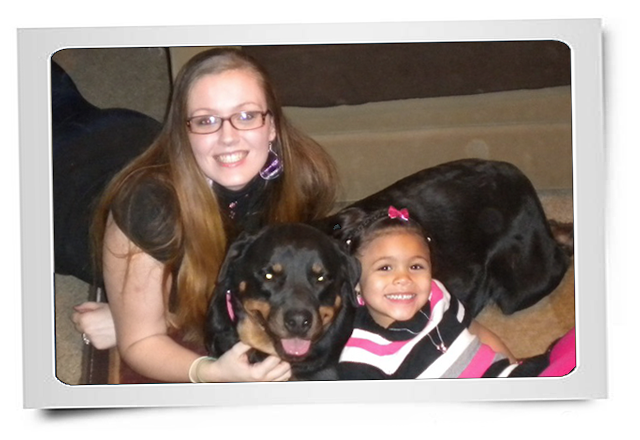 When Muriel Raggi’s relationship with her boyfriend became violent, she didn’t flee immediately. She refused to leave without her dogs.

Her Rottweiler and her daughter, then both 8 months old (pictured above with Raggi in a recent photo), had become best friends. They crawled around on the floor together. They played together. They were inseparable.

“There was a really strong bond and a family connection,” says Raggi. “When there were violent incidents, my puppy, Jasmine, would put herself in the middle and try to protect me. She got kicked and she got hit. One time, she was kicked so hard that she flew across the room and hit the wall.”

Raggi tried to find a place to go that would take her dogs, but she wasn’t having any luck. She didn’t have the financial resources to get an apartment at the time, and she didn’t have a support system. So she stayed in the relationship, hoping things would improve.

Fleeing for Her Life

Raggi ended up in the hospital and realized that if she was going to get out alive, she had to leave immediately. But what to do with her beloved dogs? Nothing had changed, and she still had the same problem.

She called local shelters, begging for help, but not a single one could accommodate her pets. And then she found Jennifer Coffey at the Mayor’s Alliance for NYC’s Animals. Coffey assured her that the dogs would be fostered while Raggi and her daughter stayed in a shelter.

Within an hour, Coffey was in a cab to pick up the puppies. “I had to say goodbye to the dogs,” says Raggi. “It was a whirlwind and very quick. I had no idea where my dogs were going or who they would be with. I just had to trust this stranger.”

The Kindness of Strangers

Helping People and Pets in Crisis was founded by the Mayor’s Alliance for NYC’s Animals to help individuals and families facing domestic violence to leave, knowing that their pets are safe. “They don’t have to remain in these terrible situations,” says Coffey. “They can flee without their pets being harmed.”

The problem was, fostering and boarding pets is only a stopgap measure. “People who enter domestic violence shelters can stay 6 months, a year, sometimes even longer. A temporary solution doesn’t work well for the animals.”

Muriel Raggi and her daughter went to an Urban Resource Institute (URI) shelter in 2009, before it started allowing pets. They ended up staying for 6 months. “Every week I called the Mayor’s Alliance to check on my dogs and see how they were doing,” says Raggi. “Those were the hardest nights of my life.”

During the day, Raggi was busy trying to rebuild her life. “It was during the night when I’d lie awake with my mind racing. How did I get here? How am I going to provide for us? And those were times when I really wished I had my dogs, just to be there. I needed their unconditional love and affection.”

The Link Between Domestic Violence and Animal Cruelty

According to Coffey, program director of Helping Pets and People in Crisis, animal cruelty is a neon-red sign for domestic violence.

“Pets are often been targeted first,” says Coffey. “An abuser can hurt an animal, and without throwing the first punch at a family member, they show what they can do to them.”

Well, now they do.

It took a while, but Raggi’s story had an effect. After she stayed in one of their shelters, the team at URI decided the system had to change.

And so the institute set up a shelter to allow families to stay with their pets. The pilot program, People and Animals Living Safely (URIPALS), began in June, accepting families with cats and small animals. It’s the first program in New York City to allow people and pets to live together in shelter.

In New York City, about 600 domestic violence incidents are reported every day to the police department. That’s a shocking number, given that as many as 48 percent of women remain in harm’s way because they won’t abandon their pets.

“Over the years we’ve accepted men in shelter, which was once a barrier,” says White-Reid. “We’ve accepted children. We’ve accepted teenage boys. And so we felt it was important to take this bold step and be the first to develop this type of program.”

But the people at URI realized they needed some help. Although they considered themselves experts on domestic violence, they didn’t know enough about animal welfare to take the next step.

It all started in the mid-’90s. Phillips was a prosecuting attorney in Michigan, handling a heavy load of domestic violence cases. One particular case really affected her, and it started a chain reaction.

“The woman came to court with her abuser and asked me to drop the charges against her husband,” she says. “It was all because she had to go home and protect her pets. He had already killed one of her dogs. She told me that she’d rather go home and die herself than to leave her pets behind. I had never heard of such a thing before.”

At the time, there were no shelters that took pets that Phillips was aware of. So she came up with the concept of sheltering families and their pets together. She sat down and penned a list of practical guidelines.

And then time went by. It wasn’t until 2008 that she founded her program. Today more than 75 shelters nationally use her guidelines for accepting pets.

When Phillips began reaching out to advocates in New York City, she connected with Jenny Coffey of the Mayor’s Alliance. For 5 years, they kicked around ways to make New York City shelters pet-friendly.

Finally, Phillips traveled to New York City and toured URI’s shelter. “I don’t actively go out and lobby. I help shelters, and I answer questions,” she says. “But I’m not trying to push this to shelters because they really need to buy into this.”

Before she goes any further, the entire shelter must be on board. That means the executive director, the board of directors, the administration, client services — everyone involved needs to buy into the project.

“I wait for them to come to me because then I know they’re ready,” she says. “So it’s been slow moving, but I’m really confident that the shelters that have done this are in it for the long haul.”

It wasn’t until January 2013 that Phillips and the crew at the Urban Resource Institute began working together. 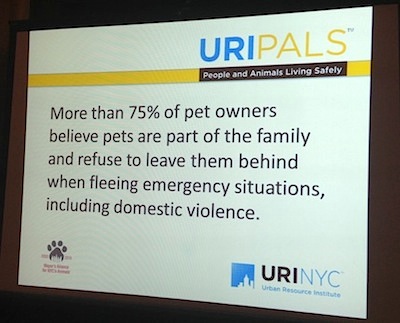 A lot of people have allergies to pets. Phillips taught URI 3 ways to house pets that will prevent other residents from having an allergic reaction. Phillips’ guidelines list 3 housing styles:

Whichever style a shelter chooses, it will take money to set it up.

“Shelters are worried about how much money this will cost,” says Phillips. “I explain to them that people love donating to help animals.” That means shelters are able to tap into money they haven’t had access to before.

“I tell shelters, please take a leap of faith and trust me one this,” she says. “The 75 shelters that I’ve worked with have been pleasantly overwhelmed by the amount of financial support they’ve received.”

(Readers can find donation information at the end of this article.)

Partnering with the Mayor’s Alliance gave URI access to many animal welfare agencies that offer support, including a number of veterinarians who agreed to provide comprehensive medical exams.

“Our clients are accepted into the program, and within a short amount of time, the animal has been referred to the vet for a full screening,” says White-Reid.

Within a day or 2, animals that need it can be spayed, neutered or vaccinated. If there’s a serious injury because of violence in the home, it’s addressed immediately.

Those ready to leave a violent relationship in New York can call the NYC Domestic Violence Hotline (1-800-621-HOPE).

The next step is a hotline assessment of the family’s situation, where the closest shelter is located and whether there’s an animal involved. “We then decide if that animal is eligible for the program, and whether the family will comply with the rules and regulations of the program,” says White-Reid.

The Mayor’s Alliance also offers transportation services. “In one of the cases that we have currently, the van went out to the client’s home when the abuser wasn’t home, picked up the animals and then brought them to the shelter,” says White-Reid.

The URI’s shelter has crates, litter boxes, toys and scratching posts for cats. “We have the room prepared so that when a family comes in, there’s a welcome kit available to them,” says White-Reid.

For starters, the shelter is in a confidential location. The shelter develops a safety plan for every client, but they also have a relationship with the local police — just in case. When domestic violence victims leave their community and come into URI’s shelters, safety is the first concern.

“A non-victim walks their dog every day out in the community,” says White-Reid. “But for someone who’s in hiding, that would put them at risk. A dog run in the back will ensure that both the pet and the victim are safe.”

And don’t forget the order of protection, says Jenny Coffey. “New York is one of 25 states that not only allow you to put a pet on an order of protection, but it’s encouraged by many legal representatives,” she says. “It’s going to ensure that the pet is recognized not just as property but as a member of the family.”

URI decided to start with cats and smaller animals to see what impact the project will have on the shelter, but it plans to incorporate dogs in the future.

“We’re collecting data to see what we learn from this experience, and then we’ll expand services going forward,” says White-Reid.

Part of the challenge that Raggi faced was finding a new place to live. It’s almost impossible, especially with a Rottweiler and pit bull, to find pet-friendly housing in New York City.

At only 4 months, the pit bull was the younger of the dogs. Belle had a much stronger bond with the foster family than Jasmine the Rottweiler. “Jasmine and my daughter were close, and I couldn’t break up that bond,” says Raggi.

The younger pit bull puppy ending up staying with the foster family, and Jasmine came home. “She recognized us right away. It was like she had never left.”

Jasmine is still an important member of the family. “My daughter and my dog play dress-up. Have you ever seen a Rottweiler in a white fur coat with a boa?”

Raggi says she’s excited that the Urban Resource Institute and the Mayor’s Alliance have teamed up for the URIPALS program. “It’s going to make a huge difference to families like mine,” she says. “They’re going to give families the opportunity to seek safety sooner, and to seek it together.”

Her story is not an uncommon one. “A lot of people suffer from domestic violence, but it’s a story that also goes untold because there’s shame attached to it,” says Raggi. The story needs to be told.

Animals are often domestic violence victims. “I have a voice and can say what happened to me. Animals can’t do that,” she says. “So it’s really important to be able to speak now, not only on behalf of other people, but for animals who suffer too.”