Is your dog scared of storms? Cat unsettled by fireworks in the distance?

Your pet is not alone. According to a 2005 survey by the RSPCA, 49% of dogs showed signs of fear around loud noises. Of these, one third had signs that were considered severe, such as extreme restlessness, vomiting or soiling themselves.

Sadly, animal shelters see an uptick in strays after thunderstorms.

Pets who aren’t properly confined may run off in frantic fear of the deafening noise. Other pets are abandoned when their families decide they can no longer handle their erratic behavior.

What kind of severe reactions to thunderstorms are we talking about?

We saw an extreme example in Jade, an older rescue Border Collie who, until recently, had spent her life confined to a tiny outhouse.

Jade proved to be an anxious dog but a loving companion to her family. However, one afternoon, there was a thunderstorm, and her family returned home to find a huge mess.

During the storm, Jade had clearly become frantic. She had tried to dig her way to safety until her paws bled. She ruined the door and a wall, and then chewed the sofa to pieces. She was exhausted, traumatized and bleeding, and — physical injuries aside — she wasn’t herself for days.

What had happened? Well, at Jade’s previous home, the outhouse roof was made of corrugated metal. An already nervous Jade was locked in the shed with no escape from the rain pounding above her head. She became phobic of rainstorms, and escape from the noise was her default reaction.

Let’s hope your pet isn’t that bad off.

In this expert guide to how to calm dogs and cats during thunderstorms and other loud noises, we’ll discuss what works — and what doesn’t.

Like Jade, some dogs leave you in no doubt of their sound sensitivity. The signs include:

But more than that, the stress of noise phobia can affect a dog’s health.

Those stress hormones decrease the body’s ability to cope and can lead to:

Veterinarians get a lot of calls about calming a dog during thunderstorms, or how to comfort pets who experience firework terror or travel anxiety.

People seem to want a “quick fix” (that is, a medication) for their nervous, anxious pets.

But the truth is, it’s best to anticipate these problems and have a conversation with your vet’s office in advance of the fireworks, thunderstorm season or travel plans.

Why? Because a combination of behavior modification and drug therapy takes time and planning.

Working on behavior modification can give you amazing results.

Dogs and cats not used to car travel, for example, can become much less anxious if you introduce them to travel slowly:

Many people discover their pet can become a seasoned traveler and actually enjoy the ride.

This takes time and patience — weeks or even months.

How to Calm a Dog During Thunderstorms and Other Loud Noises

Never fear — you can help your pet, and here’s how:

Desensitize the Dog to Scary Noises

This isn’t a quick fix, and you need to start a minimum of 8 weeks before the scary events occur.

Expose the dog to audio of scary sounds with the volume turned low (for example, a recording of thunderstorm sounds). Reward for calm behavior in the presence of the feared sound. Incrementally turn up the volume, but stay within the dog’s comfort zone.

Over the weeks you’ll find you can turn the volume higher, and the dog stays calm.

This thunderstorm noise-aversion therapy for dogs is hugely successful when done correctly.

Fit the dog with an Adaptil collar or use an Adaptil plug-in close to your pet’s favorite hiding place. The pheromones, or chemical messengers, send out reassuring signals that can take the edge off mild anxiety in a dog.

This doesn’t work quickly, so start using the product at least 2 weeks ahead of any anticipated traumatic event, such as scheduled fireworks.

This liquid “natural stress reliever” is a product many people with pets swear by.

At around $15 per bottle, it may be worth a shot. Consult your vet first.

Provide a Hiding Place for Your Pet During Thunderstorms or Fireworks

Don’t force the dog or cat to confront their fears — let them hide away.

Find a comfortable place — a ridiculously plush dog bed, a rug, a crate or space under a bed, even in the bathtub — that the pet thinks of as a safe haven. A dark, quiet place works best, and you should add a blanket and items of clothing that smell of you.

Get your pet used to their hiding hole ahead of time by seeding it with tasty treats and a favorite toy. Ideally, set up the den in advance so your pet automatically knows where to retreat to.

What to do to calm your pet during the storm or fireworks:

In extremely fearful dogs, medication can help in the short term.

Drugs from the diazepam family are most effective — they decrease anxiety and have amnesiac properties. “Amnesiac” means the dog may actually even forget the trauma of a severe storm or firework display, which can help build confidence in the longer term.

Lots of people still believe their pet has to be tranquilized in order to handle travel or loud noise.

Being in a tranquilized state may render your pet immobile, but it’s not going to lessen the anxiety. Instead, we want your pet better adjusted to the fearful situation.

Human anxiolytic and antidepressant medications have revolutionized veterinary medicine. There are various drugs to choose from, and it’s important to remember that all animals do not react predictably to these meds, just as in people. But one drug in particular — trazodone — is proving to have many uses in veterinary medicine.

Drugs that help animals with fear and anxiety fall into many classes, including selective serotonin re-uptake inhibitors (SSRIs), benzodiazepines, antihistamines and tricyclic antidepressants.

Trazodone is classified as a SARI (serotonin antagonist and re-uptake inhibitor).

Other benefits of trazodone:

Sileo (dexmedetomidine) is a drug marketed since 2016 as a way to help dogs with noise phobias. When given by people at home, it’s dispensed as a gel into your dog’s cheek pouch with an oral syringe ring-stop mechanism that may be faulty, leading to overdoses.

The FDA issued a warning in 2017 after receiving 54 adverse drug reports involving Sileo overdoses. The maker, Zoetis, was asked to revise its labeling to better emphasize the need to secure the ring-stop mechanism to avoid accidental overdosing.

Although Zoetis has revised the labeling and provided enhanced training videos on its website to show how to administer Sileo, the FDA released yet another warning in summer 2018 because there were additional reports of overdosing. As far as we know, no dogs have died from these overdoses.

What vets are reporting about Sileo:

Sileo is supposed to be given in the cheek pouch. If given into the dog’s mouth and down their throat, it is not absorbed well and therefore won’t help relieve the noise phobia.

You are supposed to wait 2 hours before administering it again — this time, directly into the cheek pouch.

Vets are largely concerned about what happens when someone accidentally overdoses the dog.

Until Zoetis fixes the dosing syringe, we advise against Sileo — the pharmaceutical company should fix the problem it created.

As always, please “follow the doctor’s orders” when dosing trazodone or any prescription drug. Don’t increase the drug or use in combination with other drugs without asking your vet first.

Appropriate use of pharmaceuticals may help you and your pets have a calm and relaxing time, even during thunderstorms, fireworks or travel.

Does the ThunderShirt Work?

The ThunderShirt, a popular vest for pets, applies gentle, constant pressure to help calm pets during stormy weather or fireworks. You can actually use it any time your dog is anxious.

For example, it comes in handy when your pet is very excitable with strangers, is pulling on the leash, has separation anxiety or is just generally weirded out in training situations.

OK, but does the ThunderShirt work?

Dr. Joe Stratton, DVM, of the Pet Medical Center of Edmond, says he has treated hundreds of dogs with anxiety. He often recommends the ThunderShirt and reports a 50–60% success rate.

And here’s what one customer tells us:

“I bought one and it just calms my dog, Sasha, right down. We had a huge thunder and lightning storm at 3 a.m., I found Sasha on the floor in a quivering mass of fear. I put the ThunderShirt on her and she was so much calmer, no shivering, she went back to sleep.”

Note: They make a Thundershirt for cats, too. 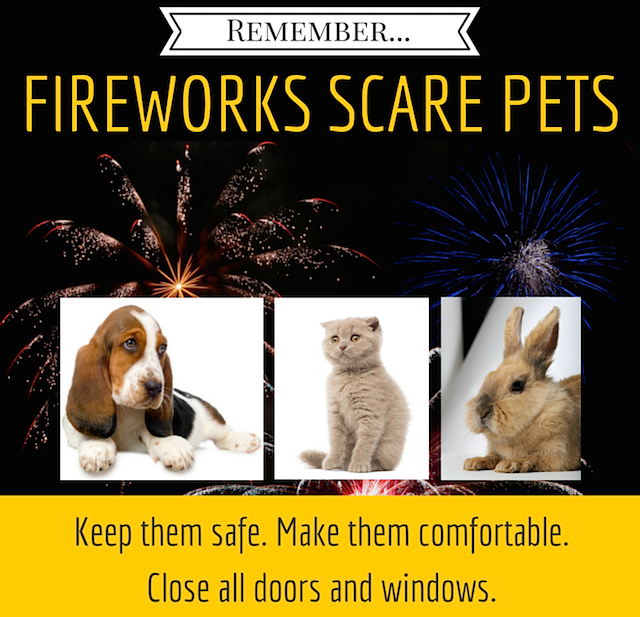 No 2 pets are alike, and not all phobic pets respond to the methods mentioned here.

You can’t force your dog or cat to stop being afraid of fireworks, gunshots, thunder or other loud noises.

So please be responsible, caring and patient. Work with your pet — and your veterinarian, trainer or behaviorist if necessary — to find the best way to calm your pet’s noise anxiety.

This pet health content was written by veterinarians, Dr. Debora Lichtenberg, VMD, and Dr. Pippa Elliott, BVMS, MRCVS. Petful publisher Dave Baker contributed to this article. It was originally published in 2013 and was last reviewed and updated Feb. 17, 2019.
If you have questions or concerns, call your vet, who is best equipped to ensure the health and well-being of your pet. This article is for informational purposes only and is not a substitute for professional medical advice, diagnosis or treatment. See additional information.
ADVERTISEMENT