If you’re wondering how does a cat brain compare with a human brain, know this: There are numerous likenesses between the two, according to studies started more than four decades ago.

We often think of “man’s best friend,” dogs, as the smartest domestic pet. But according to some feline intelligence experts, cats are as smart as dogs — just in different ways.

A cat can fend for herself — she is not a pack animal as is a dog, who often depends on others for hunting food. And when have you seen a healthy cat who could not take care of most of her own grooming needs? Adding to cats’ high intellectual standards and their cautious behavior is their outstanding curiosity.

Even after years of studying the cat’s brain, which is highly developed, we will probably never learn all there is to know about feline intelligence levels.

People and cats have practically identical sections in the brain that control emotion.

We have a similar overall brain structure as well, according to Nicholas Dodman, BVMS, MRCVS, animal behavior chief at Tufts University School of Veterinary Medicine in Boston. In both people and cats, the brain is composed of gray and white matter. Just like humans, cats have temporal, occipital, frontal and parietal lobes of their cerebral cortex. Each region is connected in the same way.

Cats seem to think in the same pattern as humans too, partly owing to the similarity of neurotransmitters, which are used in conveying data. Cats receive input from the basic five senses and process that data just as humans do.

Like us, cats have short- and long-term memory function. Did you know that cats can remember events that happened up to 16 hours before? (And to think that sometimes I can’t even recall something that happened three hours ago!) 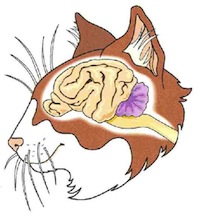 What About How Cats See Colors?

While cats may not be able to appreciate colors as much as we do, they can keep tabs on objects in motion far better than we can.

Color vision is not really important for them — while a cat may not see that green lizard on the white fence, she has no problem tracking it once it starts moving.

Let’s Talk About Some Big Differences

Now for the flip side on comparisons of the feline and the human brain and sensory system — let’s discuss a few differences.

Cats whiskers, which humans are obviously not blessed with, are a vital part of the cat’s sensory mechanism. Those whiskers may look like just a batch of hair, but they are rooted deeply in follicles surrounded by muscle tissue that’s rich in sensory cells and nerves connected to part of the cat’s brain — all of which make them important “hairs” to the cat.

The main function of the whiskers is to be a sort of “scanning system.” They can detect objects before the cat actually touches them. The slightest air movement will vibrate the whiskers and will send important signals to the brain.

The human reaction to catnip is definitely different from that of a cat. According to Scientific American magazine, human brains are physiologically different from cats’ brains in this way — catnip does not get humans “high.”

But Cats Have Tiny Heads!

Before you start thinking that head size matters at all, know this: Brain size does not play a big role in determining how smart an animal is.

Think about it — while a large animal’s brain is about a million times bigger than an insect’s brain, behavioral studies show that animals have only about three times the behavioral functions as insects have.

Social behaviors of bees, ants and other tiny insects indicate that their little brains have a lot of storage. Sometimes great things come in small packages.

Here are a couple of fun facts I ran across while putting this post together:

I suppose our cats are just blessed with up-scale brains that help make them become the pets we adore.