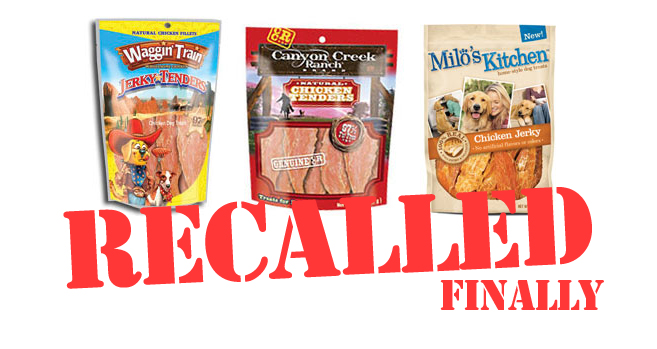 The sudden recall of three major brands of chicken jerky treats sourced from China came as quite a surprise on Wednesday.

The companies, after all, had been pressured for many months to take their products off the shelves. It seemed they would never budge, even though their jerky treats were among those named in thousands of complaints by pet owners who said their pets had been sickened or died.

The FDA is aware of reports of at least 2,245 pets that fell ill (some very seriously) and 385 that died last year alone. But the agency kept saying its hands were tied — no mandatory recall could be issued without first determining the exact cause of the trouble.

Here’s the thing: The voluntary recalls that finally dropped like a hammer on Wednesday happened because antibiotics were found on some of the treats. But it seems unlikely that antibiotics (in the parts-per-billion range) would have sickened all those dogs and caused all the problems we have seen.

So it appears that we still do not know what was actually tainting the treats. And we may never know.

That’s one reason the recall announcement has been so bittersweet to those people whose pets died or were sickened. It feels like a shallow victory.

In addition, the following smaller brands are also recalled:

Other lesser-known brands of made-in-China jerky treats remain un-recalled, even though some of them have popped up repeatedly in consumer complaints. And apparently all of the products remain on the market outside the United States.

What the Victims Are Saying

I had the chance to speak with a few people who lost their dogs. Here’s what they had to say about the recalls.

“I’m happy that they are being taken off the shelf, but the reason is bogus. That’s not what killed dogs. There is no guarantee they will not be back next month. It’s frustrating! I want to know what killed my healthy 2-year-old dog from sudden onset renal and liver failure, four days after eating one treat from a new bag. I hope the FDA keeps searching for the answer.” 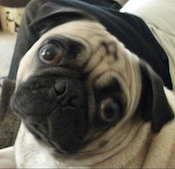 “Although I am relieved they finally issued a recall, it is a bittersweet feeling. What has happened for the past six years is the epitome of corporate greed. Unfortunately, profits were more important than our pets’ safety, which is unforgivable. If a precautionary recall had been issued when there was first doubt that the safety of our companions were compromised, Bella would still be alive and well — and a great deal of heartache, pain and suffering could have been avoided. If only the FDA and all manufacturers had met their moral obligations.”

“I first saw the recall on Facebook, and my initial reaction was tears of joy, sadness, relief and redemption. I felt that finally, someone was listening to all of us who have been fighting for too long to get these toxic ‘treats’ off the market. My second reaction was that we still have to keep fighting to get ALL of them off the shelves and demand better regulations for testing and quality assurance.”

Rachael Chambers, whose dog Cali died in May 2012, after eating Milo’s Kitchen treats, tells me:

“After hearing the news about the recall, my initial feeling was of great relief. After seven months of working with so many other victims to ensure the recall happened, I was so thankful that those poisons were off the shelves. Yet, it’s truly unfortunate that the distributors don’t take responsibility for the over 300 pet deaths, including our beloved 12-year-old Cali.

There is work to be done. I will continue to ask members of Congress to find a way to ensure that consumers are notified of FDA advisories on store shelves, rather than just on the FDA website. After five years, the word was not out about these treats and dogs continued to get sick and/or die. If there had been a better way to protect consumers and let them know about the potential harm of these products, our beautiful, loving and precious family member would still be here.

So yes, I am glad the ‘treats’ have been removed, but there is work to be done.”

Steve Poponick is an administrator of the Facebook group Animal Parents Against Pet Treats and Food Made in China. His dog Shellbie died on December 16, 2010 (and his other dog Annie has liver problems) after eating Waggin’ Train treats. He says:

“I was like a kid at Christmas when I heard the news Wednesday morning. First thing I did was call the other admins and inform them. They cried tears of joy. We have been fighting this issue for over a year now, and finally a huge step has been taken forward. We will continue fighting until all China products are removed and new laws set into place to protect our fur babies.”

Some Stores Slow to React

Meanwhile, some stores still haven’t caught up with the news.

In a post Thursday evening on the Facebook page of the group Animal Parents Against Pet Treats and Food Made in China, Stuart Paul — who joked that he’s “now the crazy dog guy” — said he “pestered [his] local Walgreens three times” to pull the affected products from their shelves, adding that finally store employees relented and “pulled them themselves.”

UPDATE: There’s some persuasive speculation that the combination of antibiotics found in the treats may very well be our culprit after all. Very interesting. More on that here. However, at least one veterinarian suspects that the toxin is glycerin — or, more specifically, Jatropha-based gylcerin.