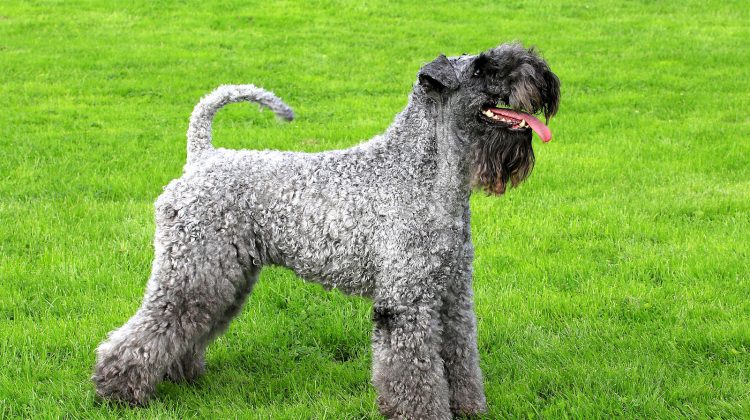 Kerry Blue Terriers are medium-sized dogs with small, dark eyes and V-shaped ears that fold over.

The tail is straight, set high and usually docked, though tail docking is illegal in parts of Europe for non-working dogs.

Despite the “Blue” in this breed’s name, the soft, wavy coat comes in:

At birth, a Kerry Blue Terrier’s coat is black, but the color usually fades over time into its final color around 18 months of age.

2. Where Kerry Blue Terriers Came From

Kerry Blue Terriers are from Kerry County in Ireland, where they’ve lived for hundreds of years.

Originally used for hunting and retrieving on land and water, they also herded livestock and were used for utility purposes in Ireland and later England.

3. How Friendly Are Kerry Blue Terriers?

These dogs are smart, active, playful and adapt easily to different situations.

Although they generally have a lovable temperament, they can get snappy with other dogs and may not tolerate cats and other small animals.

Properly introducing new animals to your Kerry Blue Terrier in a controlled setting can help. Supervise the dog’s interactions with other animals.

Kerrys are affectionate with family members but also protective, so we recommend thorough socialization and training. They make fine watchdogs and rarely bark unless they have a reason.

MEDIUM: Need to expel your Kerry’s energy and keep them entertained? Daily walks and play indoors should do the trick. These active dogs are used to having jobs to do but are just as happy lounging around and playing with their family members.

MEDIUM: Brush your Kerry thoroughly once per week. Although the coat doesn’t shed, trim it every 2 months. You will also need to pluck the hairs out of the ears and clean the eyes regularly — Kerrys tend to have problems with eye infections.

MEDIUM: A substantial number of potential health problems are associated with Kerry Blue Terriers, including:

Check out this cutie Kerry Blue Terrier, who only wants to get dry after a bath:

5. Where to Adopt a Kerry Blue Terrier

A recent online search turned up none — not even mixed breeds — available for adoption in the United States. Definitely try Petful’s free adoption search, but if you’re set on getting a Kerry, you’ll most likely have to contact a breeder.

Contact the national parent club to ask for a referral, and make sure the breeder you contact can produce health testing reports on the dogs. This is especially important because of the genetic health problems that can be passed down through the generations.

Get some screening reports for hip dysplasia while you’re at it. You want to be sure that your potential dog doesn’t have these conditions, of course, but it’s also helpful for everyone else looking for Kerrys that breeders aren’t breeding dogs who suffer from inherited illnesses.

And, as always, be on vigilant for any of the classic puppy mill warning signs.