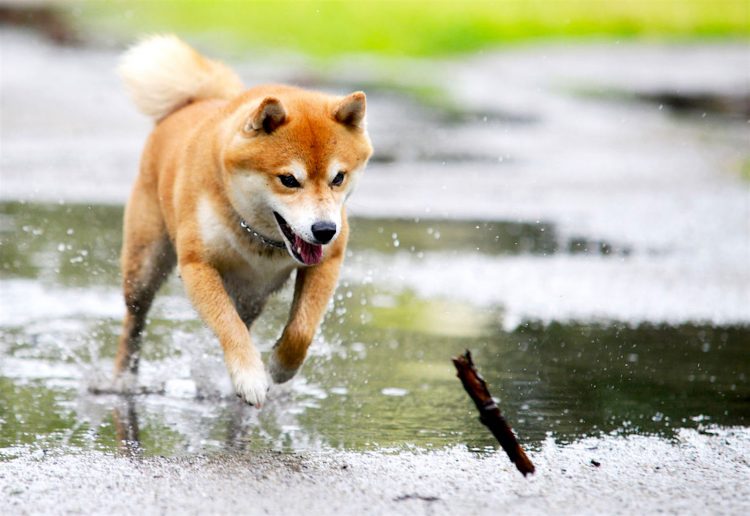 The Shiba Inu is a small, compact dog native to Japan. Of Japan’s treasured breeds, this dog is the smallest and oldest.

The triangular, dark eyes are an easily recognizable feature of this breed. The nose and lips are black, and the triangular ears stand erect on the head. The tail is set high, thick and curled over the back.

The double coat consists of a soft undercoat with a straight outer coat. Coat colors include black and tan, red and red sesame, and the undercoat can be cream, buff or gray.

Shiba Inus were originally bred to hunt small game, boars and bears in the mountains. In 1936, the breed was declared a natural product of the country and afforded recognition in an official capacity.

Shiba Inus risked extinction after World War II, as many other breeds did, but a breeding program was started to ensure their continuation.

The Shiba Inu appeared in the United States in 1954. The first litter to be born here occurred in 1979. The American Kennel Club added the breed to its Miscellaneous Class in 1992, and just a year later, the breed was moved to the Non-Sporting Group.

Shiba Inus are active, alert and independent dogs with cat-like agility. They are loyal and affectionate, and become pretty attached to their family members. They adapt well to new situations and travel well. They may be reserved with strangers, so socialization is recommended.

An interesting aspect of the Shiba Inu is the desire to avoid getting dirty. This will vary based on the individual dog, but it is not unusual to see a Shiba Inu avoid mud or dirty water.

These dogs don’t bark a lot, and they are good with children, dogs and cats. Don’t trust them around smaller animals, which might be seen as prey. They should also not be left alone for long periods of time — they can suffer from separation anxiety.

MEDIUM: Shiba Inus should have daily exercise and play, and they are good jogging companions. While outdoors, they should be leashed or exercised in an enclosed area because of their prey drive and likelihood to give chase after smaller animals.

They are active indoors and don’t bark much so can do well in apartments, but don’t leave them alone for long periods of time. Although they can live outdoors, Shiba Inus form close bonds with their family members and prefer to be close to them.

MEDIUM: Daily brushing is suggested, but a few times per week should be sufficient. The double coat is naturally waterproof, so avoid bathing too often so you don’t strip the coat. Shedding can be heavy as the seasons change.

These active dogs should have their nails trimmed regularly. Clean the ears and, importantly for this breed, the teeth to maintain overall health.

HIGH: There are several health concerns with this breed:

These conditions may occur but are not as common:

Shiba Inus can be taught an array of tricks:

Purebred dogs end up in shelters and rescues every day. Check these sources first, and you can also start with our adoptable dog search.

If you choose to go to breeders, get to know them, ask about health clearances because of the long list of health problems associated with this breed; also, ensure they are not operating a puppy mill.