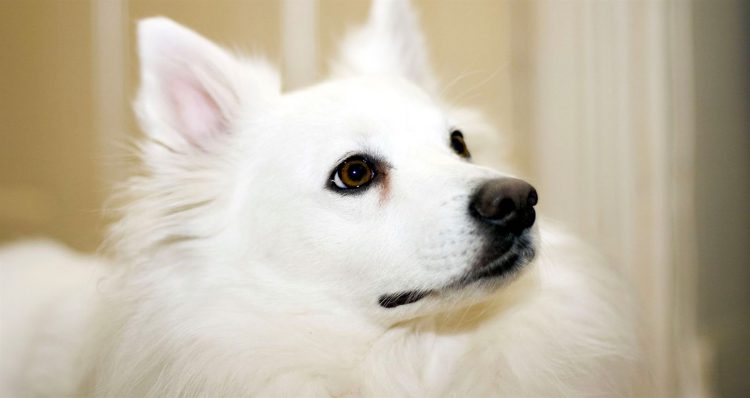 The American Eskimo Dog is small to medium in size and looks like a miniature Samoyed.

The ears are triangular, and the eye rims, nose and lips are black.

The white, straight double coat may or may not have cream markings.

The hair on the outer coat stands out and away from the body, and the tail is plumed and curls over the back. The coat is heavier around the neck and may give an appearance of being a mane, a feature that is more pronounced in males.

The American Eskimo Dog descended from European Spitz dogs and is related to the German Spitz, Keeshond, Pomeranian and Italian Spitz.

Small white dogs were usually found in communities of German immigrants in the 19th century. The dogs likely immigrated with their guardians and became collectively known as the American Spitz.

In later decades, the dogs were used in traveling circuses as part of an act in which they displayed tricks. They were fast, intelligent, agile and easy to train.

The name was changed from American Spitz to American Eskimo Dog in the early 1900s. One theory behind this change is that a kennel registered with the United Kennel Club — named the American Eskimo — was attributed to the small white Spitz dogs that kennel owners Mr. and Mrs. F.M. Hall registered.

The American Kennel Club added the breed in 1994, and the following year it added full recognition and the Non-Sporting Group designation.

This breed is intelligent and easy to train. These dogs excel at obedience and enjoy having a job to do.

They are also alert, friendly, loving, devoted, affectionate and playful. They are eager to please and make excellent guards and watchdogs.

American Eskimo Dogs are good with children and other dogs when introduced properly. They can be wary of strangers but usually welcome them after an introduction.

They must be exercised and trained consistently to avoid negative behaviors such as separation anxiety, excessive barking, aggressiveness and over-guarding.

HIGH: Long daily walks are needed for this active breed to expel energy. They are also very active indoors.

A small yard would be appreciated but is not necessary, so the breed does well in apartments.

MEDIUM: The double coat is thick and sheds regularly. It needs to be brushed daily, especially during excessive shedding, and bathed occasionally.

As with any breed, regular maintenance should be done: cleaning the teeth and ears and cutting the nails at a comfortable length. The tear duct drainage from the eyes can cause staining, so make sure to clean it out regularly.

I don’t know — do you think this American Eskie actually says “I love you?”:

American Eskimo Dogs, as with any purebred dogs, can end up in shelters and rescues. Start with our adoptable dog search or contact a local shelter or rescue to see if an American Eskimo Dog is available near you.

If you do choose to contact a breeder, spend time getting to know them and be wary of any warning signs that the breeder is operating a puppy mill.