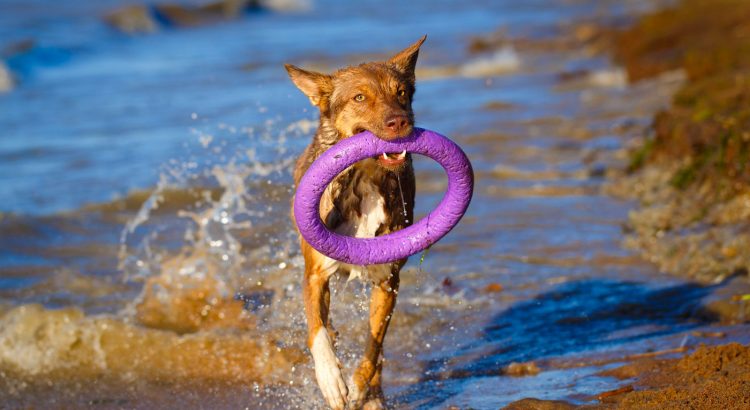 Australian Kelpies, also known as Working Kelpies, are herding dogs often referred to as workaholics because of their intense stamina and endurance.

They have almond-shaped, medium-sized eyes.

The nose color depends on the coat color, and the well-pricked ears are slightly curved and set wide apart on the head.

The medium-length tail is slightly curved when the dog is at rest.

The double coat is weather-resistant.

2. Where Australian Kelpies Came From

The Australian Kelpie can be traced to the 1870s.

Dogs imported from Scotland — and accustomed to harsh conditions on farms — sparked the Kelpie breed’s origins in Australia. Ranchers needed dogs who could work long hours over large areas and endure the hot, windy climate and varied terrain.

An estimated 100,000 Kelpies work in Australia and around the world. They appeared in the United States around 80 years ago and have filled working roles ever since.

The AKC added the breed as the Working Kelpie to its Foundation Stock Service in 2014. The breed will move to the Herding Group upon full recognition.

3. How Friendly Are Australian Kelpies?

Kelpies are herding dogs who work — they aren’t commonly kept as pets.

Their instincts make them wary of strangers, a good attribute for any watchdog. However, if you want to keep one as a pet, they will need consistent socialization in order to judge real threats better.

These dogs are incredibly independent and intelligent, and are known for being able to learn almost any command or task.

The endless energy, stamina and strong desire to work add up to a dog who requires an active and involved family to whom they are very loyal.

The Australian Kelpie is not aggressive but won’t hesitate to protect family members, animals or property, often without regard for their own safety.

As Charlotte Schwartz notes in Australian Kelpie, “Most Kelpies are not ‘lap dogs,’ but the degree to which they enjoy petting and cuddling varies from dog to dog.”

HIGH: The need for exercise cannot be understated. Kelpies need mental and physical stimulation that lasts for hours each day. This is why a working role is ideal.


Don’t underestimate your Australian Kelpie’s stamina and endurance. This is not a breed for apartment life or for people who can’t devote time and effort in the dog’s training, socialization and exercise needs. Consider training your Kelpie in agility or obedience.

The Australian Kelpie loves to work and will happily perform tasks as directed, but a bored or ignored Kelpie can be a difficult and destructive pet. For this reason, we don’t recommend this breed for people getting a dog for the first time.

LOW: Occasional brushing removes excess or dead hairs from the coat. Bathe your Kelpie as needed, and check the nails every other week.

LOW: There are just a few common health problems, which include:

Watch this Kelpie work (and play) with incredible speed and intelligence:

5. Where to Adopt an Australian Kelpie

Australian Kelpies are easy to find. Check shelters and rescues first. A recent search turned up nearly 200 available Kelpies across the United States (many were mixed breeds).

If you want a purebred Kelpie, make sure the breeder is reputable. Ask for health clearances on the dogs — specifically eye clearances, because of this breed’s predisposition to PRA.