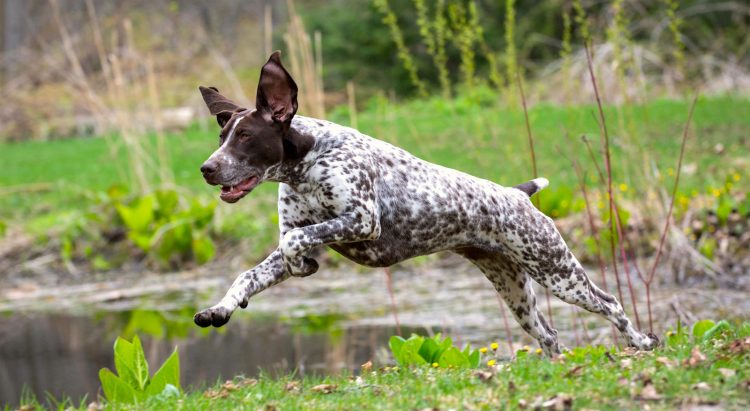 The German Shorthaired Pointer (GSP) is a versatile hunting and gun dog who performs well on land and in the water.

The GSP has a well-muscled but proportionate body with a deep chest, a straight back and strong thighs.

The eyes are dark brown, almond-shaped and medium in size. GSPs have broad, flat ears that are set fairly high and do not hang away from the head.

The tail is set high, is usually docked (this is illegal in many European countries) and is held low at rest and horizontally when in action. The compact feet are webbed.

German Shorthaired Pointers have tight skin. Their coats are short, thick and rough to the touch. Coat colors include solid liver, liver and white, liver ticked or patches, white ticked or liver roan.

The GSP is thought to have developed from foxhounds as well as Italian, French and Mediterranean Pointer stock, the original German Pointer and the Hanoverian Hound.

During WWII, in addition to overall shortages and attacks from other countries, GSP breeders had to deal with strict rules from Hermann Goering, who controlled the hunting and breeding of all hunting dogs and allegedly demanded that all clear white and liver dogs be destroyed because they did not blend into the forest.

The survival of the GSP was aided by breeders such as Joseph Burkhart, who had begun importing dogs between the wars.

Breeders who bought German Shorthaired Pointers from Burkhart’s kennels went on to create champions, which ultimately led to the AKC formally recognizing the breed in 1930.

They were bred to hunt and are extremely energetic.

Not a breed to keep cooped up for many hours at a time, GSPs must be exercised well both mentally and physically.

Bauer also cautions people to prepare their yards carefully for GSPs: “The yard or play area should be enclosed by at least a 6-foot-high fence as this is a talented escape artist who can easily scale a fence, especially if he is bored or under-exercised.”

German Shorthaired Pointers need a strong leader who is firm but calm — they won’t respond well to either wishy-washy commands or overly strong discipline. Also, GSPs should be socialized when they’re young, or else they may become reserved or shy around strangers.

They get along well with children and tend to be protective of his family.

They are happiest when you take them for long walks, hikes or hunts.

HIGH: GSPs need plenty of physical and mental stimulation, or they may become destructive or anxious. They will not do well in a kennel, tied up or left alone. They need human companionship as well as exercise.

LOW: The short coat is easy to manage. Brush your German Shorthaired Pointer regularly and bathe only as needed. Pay attention to the webbed feet after outdoor jaunts and clean them properly.

MEDIUM: This is generally a healthy breed, but German Shorthaired Pointers are more prone than others to certain diseases:

Many German Shorthaired Pointers are in shelters and rescues across the United States, some of them purebred. Check with your local shelter or rescue to see if a GSP is waiting for you there.

If you must go through a breeder, do your research and don’t be an accidental supporter of puppy mills.