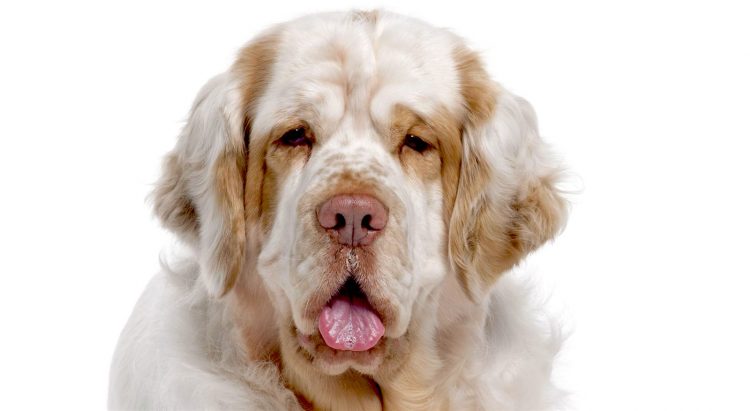 Clumber Spaniels are long, low dogs whose bodies are rectangular in shape.

They have large, square noses that are brown with shades of beige, rose and cherry. The large eyes are dark amber, and the ears are triangular and thick with rounded tips. The tail is feathered and carried level with the body.

The coat is weather-resistant, dense and straight. The main coat color is white, with possible lemon or orange markings.

2. Where Clumber Spaniels Came From

The breed originated in France and has Basset Hounds and Alpine Spaniels in its ancestry.

However, according to Dr. Ross D. Clark, DVM, author of Medical, Genetic & Behavioral Risk Factors of Clumber Spaniels and Sussex Spaniels, another theory is that the Clumber Spaniel descended from the Blenheim Spaniel.

The breed’s origin is unknown, but records indicate the dogs were present in several countries during the early to mid-1800s.

During the French Revolution, it is believed the Duke of Noailles moved his spaniels from France to England for safety. The dogs were housed in kennels in Clumber Park in Nottinghamshire.

Clumber Spaniels appeared in North America in 1844. They were exhibited in England in 1859, and the American Kennel Club (AKC) added the breed to its registry in 1878.

3. How Friendly Are Clumber Spaniels?

They are playful and affectionate with other pets and children — more so if they were raised with them.

They can be sensitive to harsh discipline, so positive-reinforcement methods are recommended.

Most Clumbers enjoy hunting, retrieving and playing in water, although it’s smart to test out that last activity in shallow waters, as this may not be true for all.

They don’t bark often. When they do, it’s usually to communicate something important.

MEDIUM: Clumber Spaniels generally enjoy walks, swimming and playing fetch. Although they’re pretty active, they move at a slower, more casual pace than most other dog breeds, so they’re not ideal jogging partners.

They thrive in apartment situations as long as they’re given opportunities for exercise and play.

MEDIUM: Shedding is moderate to heavy. Though lovable and cuddly, Clumber Spaniels tend to slobber and drool.

Brush the coat a few times per week, and trim the excess hair from the ears, feet and between the paw pads as needed. Clean the ears once per week at minimum — the breed is susceptible to ear infections.

The video below provides more info on Clumber Spaniels:

5. Where to Adopt a Clumber Spaniel

If you can’t find a Clumber Spaniel through shelters and rescues, you may need to contact a reputable breeder. Be sure that the breeder is not operating a puppy mill — look for the red flags. And, as always, ask for a copy of the dog’s health clearances.