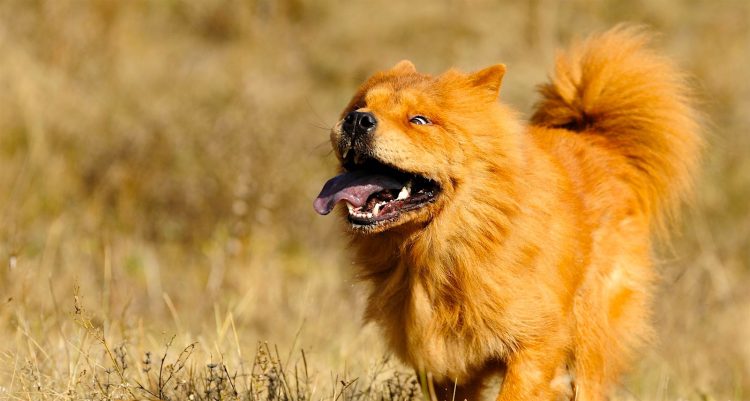 The Chow Chow is a medium-to-large, muscular and powerful dog of Chinese origin. The head is large and can be flanked by long hair, which sometimes makes the dog appear similar to a lion.

The large nose is black, and the eyes are almond-shaped and dark. The ears, although triangular, are rounded on the tips and stand straight. The tail is carried over the back and set high.

The Chow Chow’s blue-black tongue is unique, and only 2 dog breeds are known to have this feature (the other is the Chinese Shar-Pei). The fluffy double coat is either rough or smooth, and the undercoat is dense.

Coat colors include cinnamon, cream, red, blue and black, all considered standard by the American Kennel Club. Other colors may include gray, tan and white, and the coat may be shaded light or dark.

The breed has an ancient Chinese origin dating back around 2,000 years, although it is possible the dogs were present years earlier.

The dog’s ancestors vary based on 2 theories:

The Chow Chow is considered to be indigenous in the area known as Canton in southern China. Used for hunting and protection, these dogs also fulfilled herding and pulling duties. They have an incredible sense of smell and creative hunting instincts. Unfortunately, the dogs were also used as food and their coats as clothing.

The breed appeared in England around 1880 and was once exhibited at the London Zoo. A breed club was formed shortly thereafter in 1895. The Chow Chow came to the United States in 1890, and the Chow Chow Club of America was formed in 1906. The American Kennel Club recognized and added the breed in 1903.

This ancient breed is affectionate and bonds with family members, although most remain wary of strangers. They are good with children and can get along with other pets when raised together. Chow Chows are independent dogs who are also dominant.

Although originally working dogs, today’s breed is less eager to please people and can be stubborn. Start socialization and training as early as possible. Couple the dogs’ strong bodies with the potential for heavier weight, and it is easy to see why they need a firm person who can display authority.

Because of their short faces, Chow Chows sometimes snore.

MEDIUM: Daily walks are usually sufficient for this breed. They do not tolerate heat well and are better suited to colder climates. They are mostly inactive indoors, so they can live in apartments but have a tendency to be couch potatoes.

MEDIUM: Shedding can be heavy during seasonal periods throughout the year, and daily brushing is recommended when this occurs. Grooming should start early to get the dog accustomed to being touched.

Regular bathing or frequency of using dry shampoo depends on the dog’s coat. Consult a veterinarian and a groomer to develop a grooming routine designed specifically for the individual dog’s coat and skin.

Regular maintenance of the nails, teeth and ears should be performed often.

MEDIUM: There are a few health issues common to this breed. They include:

Watch this Chow Chow puppy give that menacing tennis ball its comeuppance:

While you might be able to find a Chow Chow in a shelter, they are also available through rescue organizations. Start with our dog search or check with local shelters and rescues near you.

If you call a breeder, make sure they are not running a puppy mill — be on the lookout for red flags.