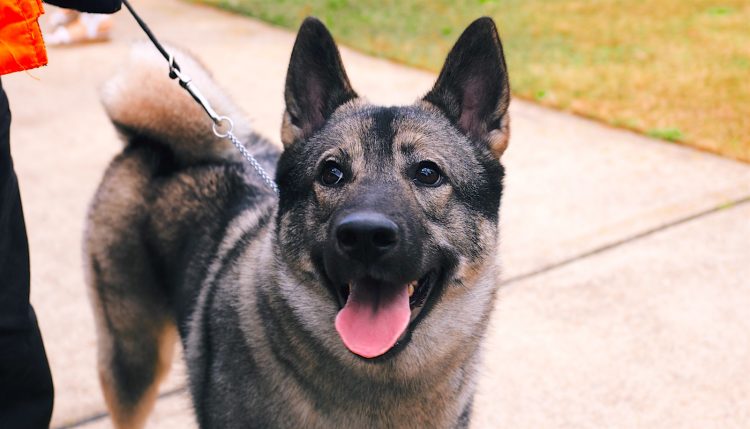 They have oval-shaped, medium eyes that are dark brown.

The ears are set high and stand erect with pointed tips. The oval-shaped paws are small, and the tightly curled tail rests over the back.

The double coat is weather-resistant and changes as the dogs age.

When they are born, Norwegian Elkhound puppies have black coats. As the coat develops, it turns gray with black tips on the outer coat while retaining a lighter under coat.

The origin of the Norwegian Elkhound has been traced to as far back as 5000 B.C., and these dogs have a close association with the Vikings.

The warriors relied heavily on their dogs and were attached to them. The Elkhounds would regularly accompany Vikings on ships and into battle.

The relationship was so intertwined that, according to mythology, if a Viking was killed in battle, the dog had to be sacrificed because the warriors believed the canine companion would exist in the afterlife with his soldier.

The breed’s name is a bit of a conundrum. They are Spitz-type dogs — not hounds — and they hunted moose. The dogs would circle around their prey and bark to confine them until the hunter arrived.

The dogs also worked as guardians of livestock to keep bears and wolves at bay.

The dogs became treasured companions and bred for conformation in the 1800s. The American Kennel Club (AKC) recognized the breed in 1913.

Norwegian Elkhounds are fearless and friendly.

They’re also loyal and affectionate, even with children, despite their independent spirit.

They can be reserved with strangers and difficult to train, even though they are intelligent dogs. They like to wander, and their barking can be excessive. It’s a natural trait and may not be something you can “train out” of the dog.

These dogs get along with cats but shouldn’t be trusted with smaller animals.

Norwegian Elkhounds love to hunt and follow scents, but be warned — some people report that their elkhounds kill animals such as raccoons, opossums and squirrels.

HIGH: Norwegian Elkhounds have a lot of energy and stamina and do best with extended exercise (they make great jogging companions). Exercise your dog for more than 1 hour a day, but keep them on a leash or in an enclosed area — they may wander off out of curiosity or to follow a scent.

These dogs can do well in apartments if their exercise needs are met.

MEDIUM: The majority of the grooming regimen involves brushing. Norwegian Elkhounds don’t need to be bathed often and lack the typical “doggy odor.” The coat repels water and dirt.

Shedding can be seasonally heavier, which usually happens twice per year. You won’t need to trim or clip the coat, but you’ll have to perform regular maintenance (cleaning the teeth and ears, as well as trimming nails).

MEDIUM: The breed is generally healthy, but your dog may be susceptible to these issues:

According to Dr. Ross D. Clark, DVM, author of Medical, Genetic & Behavioral Risk Factors of Norwegian Elkhounds, the breed is also at risk for retinal dysplasia.

Lighthearted roughhousing or dog ballet? These Norwegian Elkhounds get some twirls in while playing:

In a recent online adoption search for a Norwegian Elkhound, we found only 41 available dogs in the country. About one-quarter of this group was purebred.

If you contact a breeder, monitor your interactions closely for warning signs of a puppy mill operation.