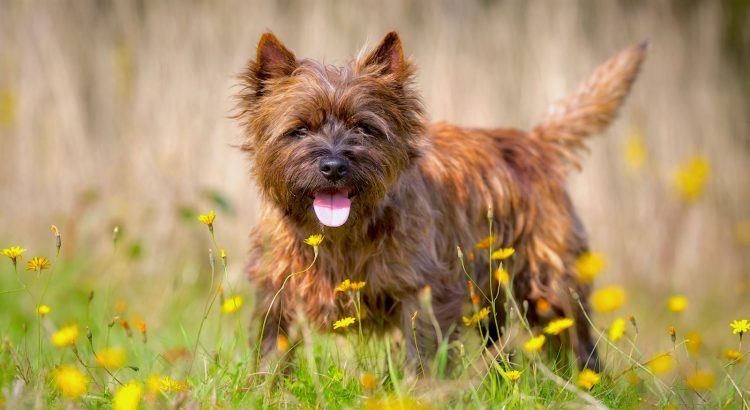 Cairn terriers originated in Scotland as far back as the 1500s.

The most memorable Cairn Terrier was Terry, a female pup who played the role of Toto in The Wizard of Oz.

Cairns have eyes that are set wide apart and sunken. Also, the eyes are medium-sized and can range in color from hazel to a darker color, depending on the dog’s coat.

The double coat is weather-resistant. The outer coat is harsh and shaggy, and the undercoat is soft.

Old working terriers from the Isle of Skye in Scotland formed the original stock of Scotch Terriers, as they were called. It was not uncommon to see several terrier types in the same litter.

One terrier later became its own breed, the West Highland White Terrier.

West Highland White and Cairn Terriers were interbred. Although the Cairn Terrier was recognized by the American Kennel Club (AKC) in 1913, the club refused to accept any mixed varieties in 1917 (and still doesn’t accept them).

The Cairn Terrier was named for the hunting skills of the breed. The dogs would chase game — usually otters, weasels and foxes — into rock caves (cairns) and hold them there until a farmer or hunter arrived.

Cairns are friendly and loyal. They are curious, happy dogs who adore children.

They can be independent but tend to adapt easily.

Without training and exercise, your Cairn can become destructive and bark excessively. Use positive reinforcement methods for training — Cairns do not respond well to harsh discipline.

They also enjoy digging, so designate a place in your yard where yours can fulfill this instinctive need.

MEDIUM: Daily walks are sufficient for Cairns because they are also active indoors. This makes them ideal for apartment living. Don’t expect them to be outdoor-only dogs. They are naturally friendly and may not properly assess certain threats from other animals.


Exercise your Cairn on a lead or in a fenced area. Because of their hunting instincts, they love chasing after small animals.

MEDIUM: The Cairn coat sheds little to no hair, but the hair can mat easily, and brushing the coat a few times a week will help. Bathe yours once per month or as needed, which may be more often given their love of digging.

HIGH: Specific issues may include:


This playful Cairn Terrier puppy can’t get enough of a yellow balloon … until the inevitable happens:

Check your local rescues and shelters for available cairns close to you.

If you contact a breeder, review the puppy mill warning signs to make sure the breeder is reputable. Also, ask to see the health screenings of the pup’s parents.

Screenings should include eyes, hips, knees, thyroid and any other tests to eliminate the diseases listed in the health section above.