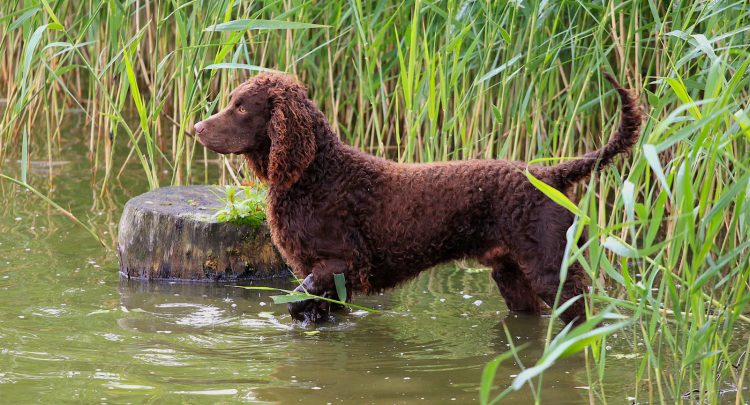 They have black or brown noses, and their ears are long and wide.

Their eyes are slightly rounded, and the eye color can vary depending on the coat color (bright yellow is considered a fault, according to American Kennel Club standards).

The dogs’ feathered, medium-length tail is tapered and curved, and the toes are webbed and well padded.

American Water Spaniels have a double coat that is water-resistant and either wavy or curly.

Coat colors include liver, brown and chocolate. There may be patches of white on the chest and toes (for conformation purposes, white patches are considered faults, according to the AKC).

2. Where American Water Spaniels Came From

The American Water Spaniel, or AWS, was developed in the 1800s in Wisconsin and was a favorite of hunters because of the dogs’ versatility.

The United Kennel Club recognized the breed in 1920. The breed was then added to the AKC in 1940 and named the state dog of Wisconsin in 1986.

Today, these dogs are companion pets and hunters who retrieve rabbits, ducks and other animals.

3. How Friendly Are American Water Spaniels?

These spaniels are intelligent, eager-to-learn, confident and obedient watch dogs.

They are great with children and get along with other animals, although they may chase after game animals if they previously hunted.

The American Water Spaniel craves human companionship and can become quite attached to people. They are also sensitive to harsh discipline. Use positive-reinforcement training and stay consistent. As with any dog breed, we recommend socialization early on.

These dogs do have at least one behavior described as annoying by Paul Morrison, author of American Water Spaniel:

They “have been known to go into a prolonged barking frenzy over things like songbirds feeding in the back yard, squirrels foraging for nuts or a shoe dropped on the floor.”

Morrison suggests training to curb unwanted barking in your AWS.

HIGH: American Water Spaniels are fine swimmers and hunters. They’re adaptable to various terrains. Although they could feasibly live in an apartment, a yard would better suit their lifestyle.

Because this breed is so energetic, exercise is not optional. The dogs can become destructive and bark or whine excessively if you don’t allow them to expel their energy.

MEDIUM: American Water Spaniels don’t shed much, but you’ll often need to brush the oily, water-resistant coat. A slicker brush works best to remove dead undercoat. Trim the hair between the paw pads, but be careful not to snip into the webbing.

In this video, an AWS named Raylan demonstrates some great skills in the field:

5. Where to Adopt an American Water Spaniel

Finding an American Water Spaniel to adopt is a challenge.

You could try Petful’s free online pet adoption search first. But if that search comes up empty and you have your heart set on getting this exact breed, you’ll probably need to contact a breeder.

If you go the breeder route, meet the dog’s parents, view the breeder’s home or facility, and get copies of the health tests performed on the dogs (hips, eyes and heart clearances). Watch out for the classic signs of a puppy mill operation.