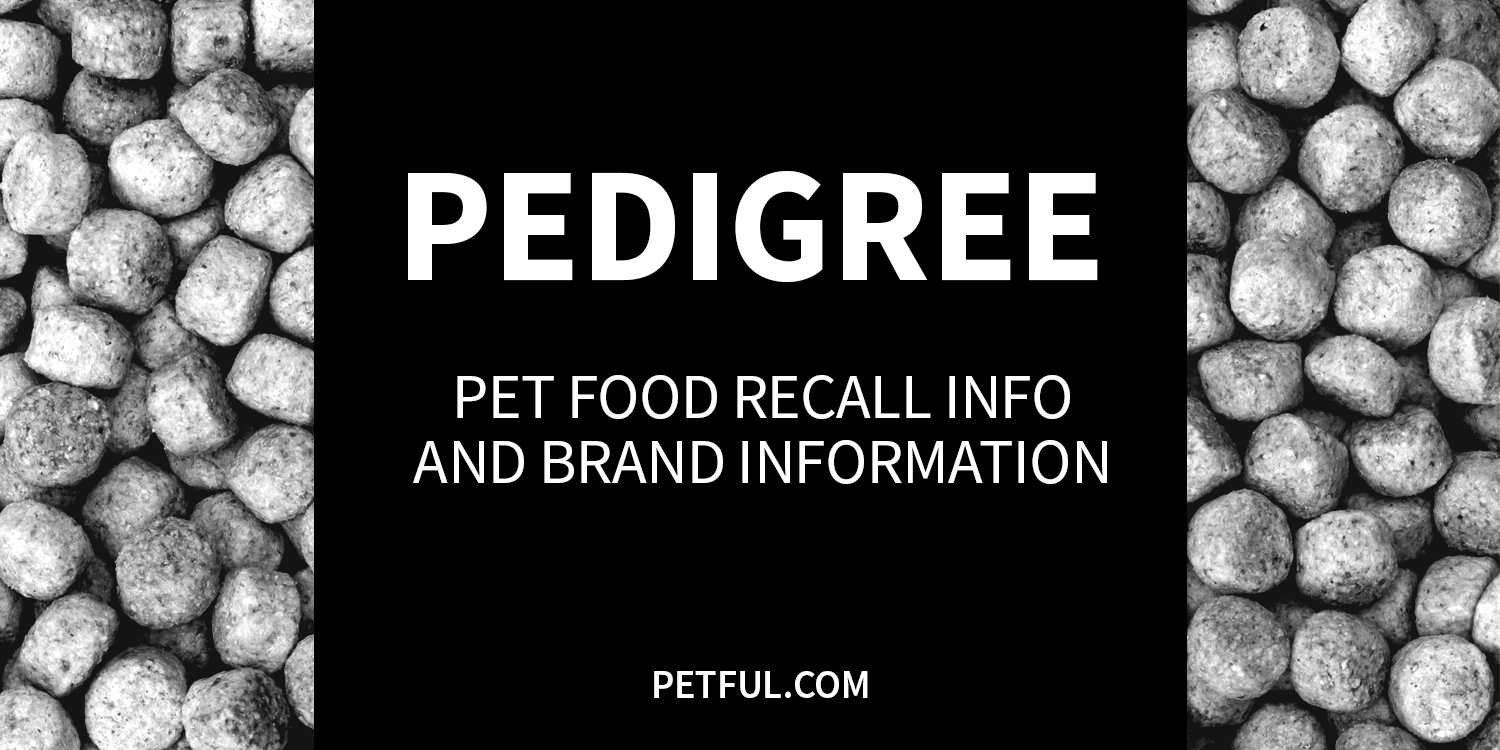 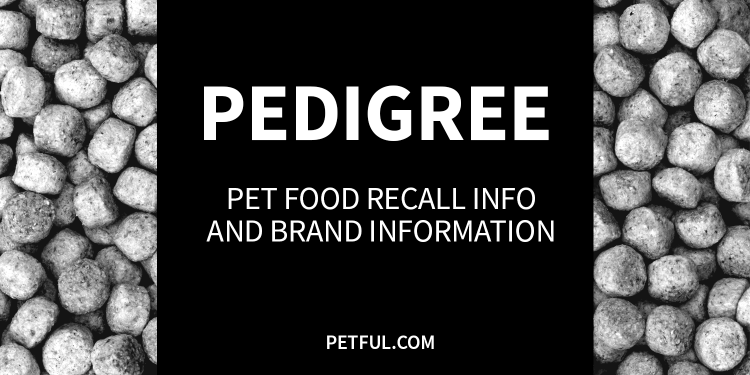 Pedigree Petfoods is a subsidiary of Mars Inc., the candy maker that in recent years has grown to become the world’s No. 1 pet food company in terms of sales. “Everything we do is for the love of dogs, from the dog food we make to the dog adoption drive we support,” the company states.

In addition to its own Pedigree brand dog food and Dentastix oral care treats, Pedigree offers resources and tips on pet care as well as gear for dog lovers.

Below, we share more information about the history of Pedigree dog food — including up-to-date recall information.

Little is known of the Chappell Brothers, a small team of dog food makers, operating in Manchester, England, in the 1930s. They called their product Chappie Dog Food.

It was an era when dogs were dogs, and people didn’t worry so much about the taste or nutrition of their dog’s food. The Chappells, whose company was named after them, put together their dog food out of the meat scraps that people didn’t want to eat. This second-grade meat was then canned.

The product was cheap and popular, which caught the attention of a man named Forrest Mars Sr., who bought the Chappells out in 1935. Chappie Dog Food became Mars Inc.’s first pet food acquisition.

Forrest Mars Sr. returned to America and reconciled with his father, who headed Mars Inc. at the time. The son and father had quarreled over the company’s direction in the years since the 1930 introduction of the Snickers candy bar, but that quarrel was now set aside.

“A candy company that buys a dog food brand might seem like it’s barking up the wrong tree,” the publication said. But today, “the majority of Mars’s business comes not from treats like M&M’s [introduced in 1941], but from pet brands such as Pedigree and Whiskas.”

There would be more pet food acquisitions to come.

Kal Kan was made up mostly of horse meat, butchered in Vernon, California. Racehorses that had outlived their championship days were led to slaughter to make Kal Kan, which became popular in the 1960s — the decade in which Mars purchased Kal Kan Foods.

It’s impossible for consumers to know how much of Mars’s current dog food line owes its existence to Chappie and how much to Kal Kan. The exact recipe of any dog food is typically proprietary. And Forrest Mars Sr. inherited and ran Mars Inc. for the majority of the 20th century.

The Chappie brand continued to be manufactured in the United Kingdom, and Kal Kan was made in the United States. Both lines used locally sourced ingredients, so they were not identical.

It’s safe to say these 2 strands of the industry — Chappie and Kal Kan — both contributed to what is, today, known as Pedigree Petfoods.

In 1988, Mars Inc. began adding the name Pedigree to packages of Kal Kan in the United States: The food was sold as Kal Kan Pedigree.

Around that time, pull-top cans were introduced to Kal Kan Pedigree. It was said to be the first dog food distributed nationally with this easy-open can design. One newspaper article described the innovation as coming straight from the “why didn’t they think of this sooner” department.

Gradually, the name Kal Kan was dropped altogether, making it just Pedigree dog food — though the former name would later get a new life as Kal Kan dog food sold at Walmart.

The name change to Pedigree reflected a changing market. Whether or not a dog has a pedigree, they are likely to be regarded as a cherished member of the family. The new name mirrored the wave of concern over pet nutrition and whether lower-end processed pet food could be shortening the already short lives of companion animals.

Nostalgia, however, makes everything old new again. Today, you can find cans of the “original” Chappie canned dog food. It’s unlikely that the recipe is the same as it was in 1935, but those who fear change can rest assured that the name is the same.

As of 2020, Mars Petcare Inc. was the No. 1 pet food company in the world, with over $18 billion in annual revenue, according to data provided by Pet Food Industry.

Has Pedigree Ever Been Recalled?

Yes. In August 2014, certain bags of Pedigree Adult Complete Nutrition dry dog food were recalled because of possible metal fragments in the bags. The bags were sold at a few different Dollar General and Sam’s Club stores in the United States. According to the recall announcement, no dog illnesses or injuries had been reported, and the foreign material was not embedded in the kibble.

That was not the first instance of foreign objects in Pedigree: In June 2012, a few varieties of Pedigree weight management wet dog foods were recalled after small pieces of blue plastic showed up in some of the cans. “While a small number of consumers have reported finding the plastic pieces, we have not received any reports of injury or illness associated with the affected product,” the company noted.

Years earlier, in September 2008, there was a massive recall of dozens of products produced by Mars, including certain Pedigree dog foods, because of potential salmonella contamination. Just weeks prior, in August 2008, some Pedigree foods were recalled in certain locations for the same reason.

In September 2007, a recall of Pedigree “chilled dog rolls” was issued only in New Zealand because metal fragments may have found their way into the packages. No U.S. products were part of that recall.

In March 2004, after hundreds of puppies and dogs reportedly died from kidney failure, a recall was issued for certain Pedigree and Whiskas dry pet foods that had been manufactured in Taiwan and Thailand and distributed to a few different Asian countries. No U.S. products were part of that recall. Inspections at the Taiwan plant discovered mold on rice and corn ingredients.

Pedigree later conceded that there was a connection between the mold and the illnesses in dogs.

“A panel of animal health experts has now concluded that toxins produced by mold found in raw materials at our dry pet food factory in Thailand were the most likely cause of the dog illnesses,” the company announced in a June 2004 “important message” on its international website.

In July 2004, Pedigree’s Asian distributor, Effem Foods Thailand Co., threatened to sue an animal group for libel. The group had made wild claims that Effem intentionally poisoned the dogs so that customers would then have to buy a new Pedigree product designed for dogs with kidney failure. “Effem has never done anything and will never do anything to intentionally harm pets,” said Allan West, general manager of Effem in North Asia, in a half-page newspaper ad published in Taiwan.

Months later, business was back up for Pedigree in Asia — and things were back to normal in the manufacturing plant in Pakchong, Thailand, albeit with some additional safety measures.

“It was kind of hard to regain the people’s trust on our brand after what had happened to us, but we just had to continue showing them that Pedigree is safe,” May Reyes, a marketing official at the plant, remarked in November 2004. An attorney for the plant noted that “customers are coming back primarily because of Pedigree’s responsible way of responding to the problem.”

Scroll down below to see the full list of all Pedigree dog food recalls, including all relevant details.

During 2017 inspections of the Mars Inc. canning facility in Columbus, Ohio, where Pedigree, Iams and Cesar pet foods are manufactured, along with other brands, Mars told inspectors it was hearing consumer complaints about foreign objects — including insects — in the pet food.

But the company insisted it was working to fully implement corrective actions.

Pest control records at the facility noted damaged cans covered in flies, and dozens of employees had complained about cockroaches in the area, especially at night. Different employees described seeing “multiple roaches,” an “invasion of roaches,” “roaches everywhere” and even “millions of roaches” — which we hope was an exaggeration.

Inspectors from the U.S. Food and Drug Administration (FDA) themselves observed 2 live roaches. The FDA stressed the seriousness of the pest problem, and the company “promised correction.”

Around 2015, we started hearing reports of so-called “wires” or plastic being found in Pedigree dry dog food.

The company responded, “These are naturally occurring fibers from meat and bone meal, like pig hair, and are completely safe for your dog to consume.”

That wasn’t the first time the issue of pig hair had come up with Pedigree. A few months earlier, customers had complained about “stiff fibers” showing up in Pedigree Marrobone dog treats. Mars had commented:

“It’s possible for natural fibers such as pig hair to appear in the finished product. While consumers may not have noticed these natural fibers when feeding their dog, we can assure them that the treats are safe for dogs to enjoy.”

One pet food safety advocate, Mollie Morrissette of the blog Poisoned Pets, cried foul. “The problem with Mars’s explanation is that filth, such as animal hair, is not allowed in pet food — at least not much of it, anyway. And certainly not in the amount consumers are finding,” she said.

Association of American Feed Control Officials (AAFCO) guidelines specify that meat and bone meal should have no hair, “except in such amounts as may occur unavoidably in good processing practices.”

Morrissette asked: “Is Mars capable of manufacturing a pet food without hair, except in such amounts as may occur unavoidably in good processing practices?”

Petful publisher Dave Baker went out and bought a random bag of Pedigree dog food in August 2015, and he, too, found wire-like hairs in the food. Here’s a photo he took:

Have you found something odd in your Pedigree dog food? Let us know by leaving a comment below.

Cause: Potential for salmonella. Announcement: FDA report dated Sep. 12, 2008 (archived here). What was recalled: The following Pedigree dry dog foods with a “PAE” in the 6th, 7th and 8th digits of the Lot Code on the bag, manufactured at Mars Petcare’s Everson, Pennsylvania, facility from Feb. 18 to July 29, 2008:

Cause: Possible metal fragments. Announcement: Newspaper report from Sept. 6, 2007. What was recalled: The recall involved Pedigree brand “chilled dog rolls” manufactured and sold only in New Zealand. No U.S. Pedigree products were part of this recall. The affected products included the following varieties with “best by” dates of Oct. 16–19, 2007:

Cause: Suspected link to cases of kidney failure in dogs. Announcement: Company announcement from March 2004 (archived here) and newspaper reports. What was recalled: The recall involved certain Asian countries, not the United States. The products were made in Taiwan and Thailand and were sold in Hong Kong, Indonesia, Japan, the Philippines, Taiwan, Thailand, Singapore, South Korea and Vietnam. The affected products included:

Again, no U.S. pet food was affected by this 2004 Pedigree recall, which involved only food sold in the Asian countries noted above.

Have You Had a Problem With Pedigree?