These days, you have all sorts of diets out there: gluten-free, dairy-free, meat-free … the list goes on and on.

But be careful about imposing these diets on your pets. In fact, the most common cause of taurine deficiency is feeding a vegetarian diet to cats.

This is because cats are obligate carnivores, meaning they must eat meat (which is rich in taurine) to stay healthy. The problem with a vegetarian (or vegan) diet is that cereals and grains are low in taurine, and cats are unable to manufacture their own from smaller building blocks.

As the name suggests, taurine deficiency is a deficiency disease, and so the symptoms are not sudden and dramatic but come on slowly over time.

However, when they develop they are serious and may include blindness, heart failure and clotting disorders.

Symptoms of Taurine Deficiency in Cats

Although taurine deficiency can cause infertility and blood clotting disorders, the symptoms that are most commonly recognized are blindness and heart disease.

The blindness is a result of the retina not being able to process light. Signs of blindness include wide, dilated pupils that do not constrict down to slits even in bright light.

Although a blind cat may bump into things, his whiskers are immensely valuable at navigating around, so it is not always obvious when a cat has gone blind, especially if his eyesight was poor for a while and he learned how to adapt.

Taurine-deficient cats suffer from a specific disease of the heart muscle called dilated cardiomyopathy (DCM). This causes the heart muscles to become saggy and baggy, and the heart loses tone — a bit like a balloon that has been inflated several times and loses elasticity.

These cats lack energy, breathe through their mouths and have rapid, shallow respiration.

Causes of Taurine Deficiency in Cats

They have no option but to consume ready-made taurine as found in muscle and meat.

Taurine plays an important role in tissue metabolism (how it burns energy). One of its specific jobs is transporting potassium and calcium ions across heart and photoreceptor cells, and when taurine is lacking, this interferes with the abilities of the heart and retinas to function normally.

A physical examination of the cat and a history of a poor diet are sufficient to flag concerns about possible taurine deficiency.

To find an absolute answer, veterinarians run a blood test that looks at the absolute levels of taurine in the blood.

There are 2 sides to treatment:

Immediately after diagnosis, the cat must take a taurine supplement of around 250–500mg of taurine twice a day in addition to switching to a well-balanced diet.

After 12 weeks, providing the cat is eating well, the supplement can be stopped.

Sadly, there is no treatment for the blindness that accompanies long-term taurine deficiency in cats — it is permanent.

In terms of the heart condition, the degree of damage must be assessed on an ultrasound scan, and then supportive medications must be started that make the most of the residual pumping ability left in the heart muscle.

Unfortunately, taurine deficiency has occurred, damage cannot be reversed, and so the aim is to halt deterioration and improve the circulation.

Taurine deficiency is entirely preventable by feeding your a balanced diet designed specifically for cats.

Speaking of balance, next we’ll discuss what can happen if you give your cat an all-meat diet. (Hint: It’s not good.)

It’s Not Healthy for Cats to Eat Too Much Meat

As we’ve discussed, cats are obligate carnivores, which is a fancy way of saying: Eat meat or go blind and have heart failure.

Cats lack the ability to construct certain proteins that are vital to good health.

One such protein, taurine, is found only in meat, not vegetables. Dogs can manufacture taurine from smaller building blocks, but cats are not able to do this and become deficient on a vegetarian diet.

Therefore, it might seem odd to say, but an all-meat diet can make a cat ill.

Yes, too much meat can result in painful joints and a risk of bone fractures, as a couple of my clients found out the hard way.

From Energetic to Withdrawn

When the Unwins adopted 2 ginger kittens, Eric and Ernie, I was delighted to be trusted with their health care. Having nursed an elderly cat for years, the Unwins enjoyed having energetic kittens around the house once again.

They were a real dynamic duo, a pair of delightful fluff balls who loved to rough-and-tumble. But when Eric was 9 months old, he lost his mojo. He developed a limp, slept all the time and got grumpy when disturbed. The lively youngster became a withdrawn, sullen kitty-cat.

When I examined Eric, what I found puzzled me. He walked stiffly, as if on hot coals. When I felt each of his joints, I was rewarded by a stream of hisses because they all hurt.

Something odd was going on. Chatting to the Unwins about Eric’s habits, I found out he was a bit of a chicken addict and rarely ate anything else. A light bulb went on, and I recommended X-raying Eric’s legs.

The X-ray plates confirmed my hunch. Talk about 50 shades of gray!

Instead of dense white bones, Eric’s skeleton was a faint, ghostly shadow — more like paper than concrete. His bones lacked the whiteness associated with healthy calcium deposits. In short, Eric was calcium-deficient.

Another chat with the Unwins, and everything slipped into place. Eric was such a chicken fiend that they’d stopped offering him cat food, and he was fed on a meat-only diet — mainly chicken breasts. The trouble is that meat is pure protein and lacks the vitamins and minerals essential for healthy growth and strong bones.

If you’re scratching your head thinking that cats eat meat in the wild, think again. When a hunter catches a mouse, he eats the whole thing: bones, fur and stomach contents. These provide valuable vitamins and minerals — a balanced diet for cats.

The actual amount of meat on a mouse carcass is relatively low, and the overall nutritional content is very different from dining exclusively on chicken breasts.

Because he lacked calcium, Eric’s bones were the consistency of putty. The resulting pain in his joints was responsible for his bad temper.

Unfortunately, he was also at extreme risk of bone fractures. If we were to avoid disaster, he needed to be wrapped in cotton wool, so he was immediately put on crate rest for 3 weeks.

In the meantime we worked at getting some strength back into his fragile skeleton. As a quick fix, we added a vitamin and mineral supplement to his chicken. The Unwins worked hard at finding a tasty cat food he’d eat and did a great job of transitioning Eric by mixing his favorite chicken with the new food.

To help with the pain in his joints, Eric took a pain-relieving medication from the non-steroidal anti-inflammatory (NSAID) family. Happily, once his body drank in those much needed nutrients, his bone pain eased. He became sweet-tempered again, and we stopped the medication.

Our story has a happy ending because nature worked miracles, and once Eric was back on a proper diet his bones became strong. He became his robust, playful self again.

The moral of this tale is that, as with so many things in life, balance is important. Too much of a good thing is bad. Always feed a balanced diet that is designed for that species, and all will be well. Go to an extreme, and you risk putting your pet’s health in danger.

Remember: Nature knows best, and when your cat goes hunting, she eats the whole mouse … unpalatable as this may be to us (on so many levels).

This pet health content was written by a veterinarian, Dr. Pippa Elliott, BVMS, MRCVS. It was last reviewed Dec. 17, 2018. 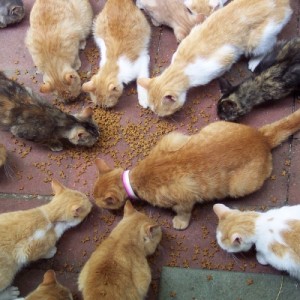 Is Your Cat Really a Finicky Eater? Maybe Not. 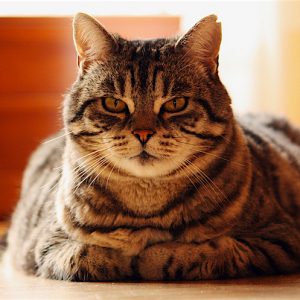 Why Free Feeding May Be Bad for Your Cat