I see all kinds of patients: kitties, pups, rabbits, iguanas! Rats, ferrets, you name it.

And they are owned by all kinds of folks: young, old, newlyweds, young families, and the old to very old, ill or debilitated. Pets can be a great morale booster for the elderly — yet they can also pose a serious challenge.

If you’re a caregiver for an older person, or older yourself, and considering getting a pet or already have a pet, keep reading.

The benefits of pet ownership for an older person, whose world may be getting a little smaller every day, are fabulous. Companionship, affection, stimulation, joy! Not to mention true health benefits such as lowering stress, blood pressure and increasing mental acuity. But owning a pet carries daily chores and responsibilities, and the elderly person has to be up for it.

Dogs, I believe, can give a great deal to an older owner, probably more than any other pet, but also pose the biggest challenges. And before your 80-year-old dad tells you “he’s not a cat person,” let’s explore the issue before getting him a rescue German Shepherd.

What are the daily responsibilities of owning a dog for an elderly person?

Unfortunately, friends or relatives often don’t get involved until there is a tragedy of sorts. I deal with these frequently. I am most annoyed when a shelter or group that should know better adopts a pet out to an older owner irresponsibly.

A 75-year-old-plus woman adopted a 65-pound-plus dog-agrressive dog from a “reputable” shelter. The owner’s mental faculties as well as strength began to falter within three years. The dog killed a neighbor’s toy breed dog while both on leash. The owner still does not want to give the dog up. The family doesn’t want the dog.

Another older person adopted a Bichon (probably a good breed choice in most cases) from another rescue. In this case, the rescue lied about the dog’s age and, I believe, health status. “Wendy II” was already a geriatric dog when the woman adopted her, probably not that much younger than “Wendy I,” whom she had just lost. Within a few months, the conscientious dog owner had great difficulties giving Wendy II medications, and brought her back to me for constant problems. She had just gone through this with the other dog. This was a terrible adoption. 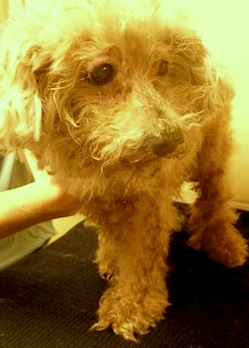 ONE STORY OF A PET OWNED BY AN ELDERLY PERSON

This little guy has a geriatric, handicapped owner and home health aides who visit, but he usually comes in to my hospital with his nails curled around almost touching his pads. Yesterday the hair was so matted around his eyes, it took 30 minutes to carefully soak them and trim the hair. He is feeling much better now!

We never ask for more than $50 per month from his owner, no matter what the bills are on her pets, because that is what she says she can afford. I just wish someone would get them to us sooner so we can help.

An Ounce of Prevention

If the older owner already owns a pet, try to put a support system in place before something bad happens. Family members may be able to find volunteers, neighbors or pet sitters/walkers for a small fee to help out. Local groups and Councils on Aging may be of help. In New York City, Citymeals-on-Wheels people found out the elderly were feeding some of their meals to their pets and both pet and human were under-nourished. A partnership was announced with Paws NY in March to add pet food and pet-care assistance. What a great service!

If you are searching for a dog for an older person, the natural idea would be to find a trained, toy or small breed dog. Breed lists are available, but be cautious of these. They are only suggestions. After all, every poodle is not the same docile lap dog, just as all pit bulls are certainly not aggressive.

Beware of just finding any ol’ chihuahua, or maltese or Boston Terrier because they’re recommended breeds. Many of the smaller breeds can be yappy, hard to housetrain, still in need of lots of exercise and difficult to medicate! Some middle-sized and larger dogs may be calm and very well tempered if not suited for the lap. So temperament testing, in this situation, is probably the key.

So Maybe Not a Dog?

I believe a cat or a bird can be a fantastic addition to an elderly household, particularly if the person has good, previous experience with these pets. As you cat lovers out there are fully aware, feline companionship can be intensely rewarding, take less energy and be less time-consuming than owning a dog. Being able to clean a litter box and choosing a nice-tempered cat is about all it takes to have a pleasant relationship.

Elderly cat owners with very fragile skin or compromised immune systems must avoid getting scratched. One of our hospital cats is with us because he’s just a bit “quirky.” His elderly owner could not pick up on the signal that he was about to bat her, so Tut lives with us now, after hurting her quite badly. Other aging owners may have difficulty giving cats medication (but who doesn’t)!

A tamed parakeet or cockatiel (unlike a large bird, which can live for decades) is a delightful addition, and can liven up a quiet house. If the person is interested in a bird, I think this can be a match made in birdland. My 81-year-old Aunt Joan has a 14-year-old cockatiel that speaks to her constantly, particularly while my aunt is following her baby eagles on the computer.

The cockatiel has a large vocabulary. All of my aunt’s neighbors can hear him in their houses as well!