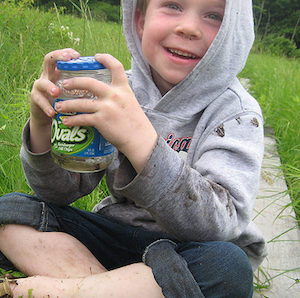 My childhood memories include the joy and pride I experienced each time I collected bees, lizards and various bugs in jars. My friends and I worked hard at competing with one another to see who could capture the most critters.

Frogs were never one of my favorite collectibles; but later in life, when I became a parent to two sons, I was forced into learning how to keep a frog in a jar, temporarily.

First, Know What You’re Getting Into

According to Frogs and Toads of the Southeast, anyone who chooses to have a frog as a pet should know how to care for it in captivity. While some frogs make good pets, others do not. Not all frogs are able to adjust to captive conditions. However, certain species may adapt well if properly cared for.

Also, you (and your kid) should realize that petting or playing with a frog is in no way comparable to the frequent handling that hamsters and parakeets tolerate, as frogs are not always personable pets.

Captive frogs can pose dangers to their owners. Frogs in captivity can develop diseases that may be transmitted to humans. Many frogs or toads have skin toxins that can cause irritation to our eyes, nose or mouth. Washing your hands with soap before and after handling an amphibian is a must. Always handle a frog gently to reduce stress on the animal and the amount of toxin it releases.

How to Keep a Frog in a Jar

Lots of folks, young or old, at some point in life want the opportunity of keeping a frog in a jar. I think it is a great learning experience for our children to catch, feed and take care of different types of animals. Therefore, every parent should know how to build a quick, safe habitat for small pets like this.

But… keep in mind that the jar should only be a temporary home (just a few days) until a larger, more suitable “frog pad” is set up, or until you release the frog back into the wild.

Here are some simple instructions for setting up your temporary terrarium:

Feed your new pet frog a few insects — dead or alive, but preferably alive — every other day. Grasshoppers, spiders and beetles are among a frog’s favorites.

The majority of frogs and toads will dine on a smorgasbord of wiggly and jiggly creepy-crawly delights… stuff that sends most people into screaming fits. We’re talking worms (bloodworms, mealworms, waxworks), bugs, flightless flies, crickets and grasshoppers. So brace yourself if you’re squeamish.

How much to feed? Try providing two or three live crickets at first, and see what happens. If those insects disappear fast, you’ll know you’re on the right track. You don’t want to overfeed the frog.

In conclusion, caring for a pet frog in a jar is not too difficult. If you are a parent, it may take a little patience and willpower to see it through, but once you know exactly how to keep a frog in a jar — and see the delight in your child’s eyes — you’ll probably find that it’s well worth the effort.