A 9th-century Irish monk sits translating a religious text late into the night. His only companion is a white cat named Pangur Ban (“ban” means “white” in Old Irish, the root of Gaelic).

At some point, the monk grows weary of his work and finds himself watching Pangur Ban stalk a mouse. Entranced by his companion’s quick, graceful moves, the man begins scribbling a poem on the manuscript he has been working from:

I and Pangur Ban, my cat,
‘Tis a like task we are at:
Hunting mice is his delight,
Hunting words I sit all night.

We don’t know the monk’s name, but Pangur Ban’s name has lived on through the centuries — in translations by W.H. Auden and Seamus Heaney, and countless retellings.

All monasteries kept cats. It was a necessity: Monasteries housed libraries, and mice didn’t limit their nibbling to foodstuffs.

It’s tempting to view Pangur Ban as the first library cat. But the truth is, cats have been protecting the written word since the 3rd century B.C., when the Royal Library of Alexandria was in its glory.

Papyrus was very popular with the rodent crowd in ancient Egypt. The seemingly endless piles of scrolls also provided great hiding places for them.

It took a sub-librarian, Petsis — and no, I didn’t make up that name up — to come up with a solution.

Thoroughly frustrated by the havoc wreaked by the mice and rats, he needed a way to unwind and began fishing in the Nile after work. He soon attracted a friend — a little cat named Myeo.

He ended up sharing his fish and his home with Myeo. In turn, she started accompanying him to the library every morning. She provided him with company while he sorted through the scrolls.

She also took the rodent problem into her capable paws.

Cats Helped Out in Unexpected Ways

Petsis, delighted with Myeo’s work, brought in more cats. These felines “played an important role throughout the existence of the Royal Library of Alexandria,” writes Norman D. Stevens of the Molesworth Institute.

What’s more, he says, “there was a succession of cats, one of which was always designated as the primary library cat, who was extended special rights and privileges. Indeed, several of the primary cats were recognized for their heroic deeds in helping to preserve and secure the library’s collections.”

The cats helped in another very unexpected way: Petsis kept tally of their kills on scraps of papyrus.

He began alphabetizing the tallies, using the cats’ names. It then occurred to him that “he could apply the same principle to the organization of the scrolls and that he could use those [same] scraps to create labels” for those scrolls.

Long after Petsis and Myeo — and even longer after that nameless monk and Pangur Ban — cats continued to make their way into libraries. 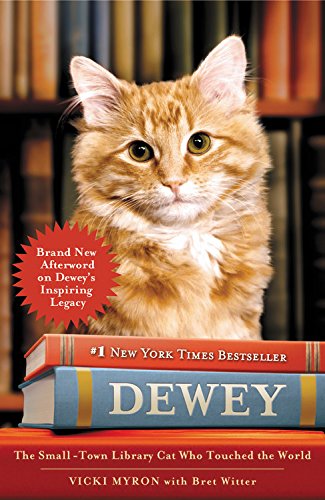 The first name that springs to mind, of course, is Dewey Readmore Books.

The red tabby kitten was found half-frozen in the book-drop box of the Spencer, Iowa, library in January 1988. Vicki Myron, the library’s director, brought him around and made him the official library cat.

There were complaints and concerns. Dewey stole and ate rubber bands. And he never was a mouser. But he made a point of greeting library patrons and attended staff meetings.

He never missed the weekly story hour with the kids, “curl[ing] up in the lap of one lucky child,” Myron recalls. “He didn’t let a child grab and hold him in her lap; he chose to spend time with her. And every week it was a different child.”

Dewey followed pretty much the same approach with adults. He had a knack for picking out the person who needed him most, and he went straight for them.

In short, he brought a badly needed lift to the spirits of many and made the Spencer library a kinder, homier place until his death at age 19. Now there is a heartwarming book about Dewey.

Watch this video about the iconic Dewey Readmore Books:

Close behind Dewey are Baker and Taylor, a pair of Scottish Folds who worked a similar magic at the Minden branch of the Douglas County Library in Nevada for almost 15 years.

“The cats were the great equalizers,” says Jan Louch, the assistant librarian there.

“Baker and Taylor welcomed thousands of people into their home with grace and an abundance of charm…. The library was the only home those cats knew, and they both were very happy cats. They loved the people and the staff, and we loved them back.” 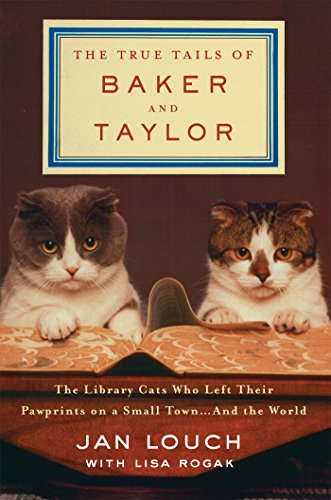 Cats don’t necessarily work for every library. And even if everyone is in agreement, there have to be ground rules as well as an understanding of the right type of cat for the job, as Louch points out.

But, in her opinion, nothing “beats the warm fuzzy feeling that only comes from having both books and cats in close proximity to one another. And cats can definitely help increase social interaction at any library while providing a natural boost to patron visits.”

In other words, they bring back some of the more informal warmth that we associate with old-time libraries.

In a digital age, library cats remind us of the need for real interaction of other living beings.