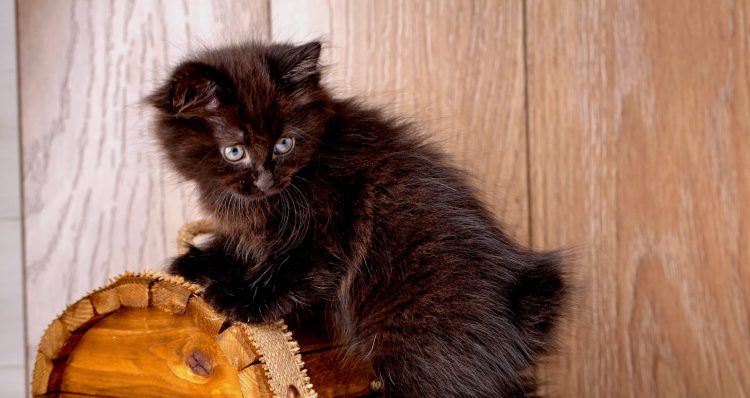 The American Bobtail is a medium to large cat with a naturally short tail.

These cats are native to North America and resemble wild cats because of their almond-shaped eyes. They are muscular and graceful cats with affectionate dispositions and higher-than-average intelligence, and they reach maturity at 2–3 years old.

The coat comes in 2 lengths: short or medium-long. Coats can be any pattern or color, allowing a great variety in the breed.

2. Where American Bobtail Cats Came From

John and Brenda Sanders were vacationing in Arizona in the late 1960s when they discovered a brown kitten with a shortened tail.

They named him Yodi and took him home with them to Iowa. The couple’s existing cat, a mixed-breed domestic cat named Mishi, was romanced by Yodi when he was a little older.

Their kittens had the same short tail that Yodi had, and the Sanders’ friends quickly took notice. Several of the kittens were crossed with longhaired color point cats to produce the first American Bobtail cats.

The early Bobtails had specific color characteristics, but these were too difficult to replicate to use as a standard. Eventually, the breed was listed as having any acceptable coat color and pattern.

3. How Friendly Are American Bobtail Cats?

American Bobtails are loving and affectionate cats, and they tend to become attached to the entire family instead of just one person.

They prefer to spend time with their family instead of being alone, but they are not demanding.

Their short tails “wag” according to their moods, and they are comfortable with children, other pets and dogs.

Bobtails are intelligent and can be taught to walk on a leash, play fetch and hide-and-seek, and perform other tricks. Some people report their Bobtails act more like dogs than cats by coming when called or following them around.

They are considered quiet cats, though they use trilling and chirping to communicate.

MEDIUM: American Bobtail cats are active indoors and usually playful, and you can take them for walks outside on a leash. Provide a consistent amount of food each day, and introduce toys and towers to keep your cat active.

Puzzle toys can provide extra mental stimulation for this smart breed. If you notice weight gain, increase your cat’s exercise with these tips: 10 Fresh and Easy Ways to Exercise Your Cat.

American Bobtails are nimble and creative. Many people report that their Bobtails are masters at escaping carriers and closed rooms. They are great to travel with and adapt easily to new surroundings.

Keeping your Bobtail primarily indoors is the safest option to protect against attacks by other animals or reduce the chance of disease.

MEDIUM: Both coat varieties of the American Bobtail are double coats, and they are easy to maintain.

Brush your Bobtail a few times a week, and bathe them only occasionally. When a regular grooming routine is in place, the coat is less likely to tangle or mat. Shedding may increase during the spring or fall.

Provide scratching surfaces to help keep the nails maintained between trimmings. Check the eyes and ears for discharge or buildup, and brush the cat’s teeth regularly to prevent periodontal disease.

MEDIUM: Some American Bobtail cats are born without tails and may suffer from additional health problems due to a malformed spine.

Other than the typical cat health problems, Bobtails are generally a healthy breed.

Too cute! Check out this video of Iggy, an American Bobtail:

5. Where to Adopt an American Bobtail Cat

American Bobtails do end up in shelters and rescues. Check adoption and rescue resources first, and check out our online cat adoption search.

If you decide to get your Bobtail through a breeder, watch out for any signs that the breeder is operating a kitten mill.