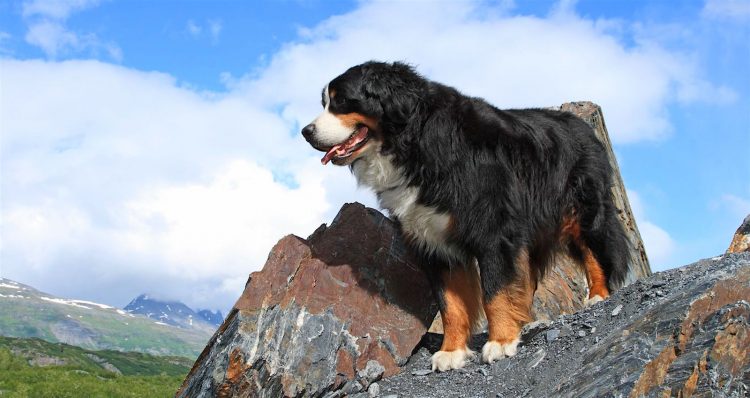 The Bernese Mountain Dog (a.k.a. Berner) is the only Swiss Mountain Dog to have a long coat. The large, strong dog has medium-sized ears in a triangular shape, and the tail hangs low.

The weather-resistant double coat can be straight or wavy and is tricolored with black, white and rust. White along the face, paws, snout and splashed across the chest is typical for this breed.

The Bernese Mountain Dog is a farm dog from Switzerland. Known as the Berner Sennenhund in the native land, the dog was named after the Canton of Bern (a canton would be similar to an American state, for comparison).

The dogs protected farms and livestock, and notified their farmers of animal or human visitors. They would go along on cattle drives to protect the herd as they traveled and when they stopped to graze along the way.

As the processing of cheese became a more prominent on farms, farmers could sell milk at a reasonable price. They used the dogs to pull 2-wheeled carts, most of which were filled with milk.

The first Bernese Mountain Dogs arrived in the United States in 1926. The American Kennel Club added the breed in 1937.

This very intelligent dog breed is strong and agile but also gentle and easygoing. They are natural watchdogs who are confident and alert but should be thoroughly socialized as puppies. They are slow to mature and can exhibit puppy behavior for years.

Consistent obedience training is necessary. Bernese dogs are easy to train but do not respond well to harsh discipline.

Bernese dogs love children and are close to their family members. It’s not uncommon for a Bernese to become attached to one family member.

Because of this strong attachment, this breed does not cope well with long periods of separation or crating/kenneling. They are good with other animals and dogs.

MEDIUM: Daily exercise is needed for this active breed. They are not recommended for apartment living because of their inactivity indoors, and they do best with a large, fenced yard. They are sensitive to heat because of their double coats and would do best in colder climates.

HIGH: The long double coat of the Bernese needs daily brushing. Bathing or dry shampoo can be used as needed.

Shedding is seasonally heavy, and extra brushing will be needed during this time. The hair between the paw pads should be trimmed as needed, and this is easiest to do when trimming the dog’s nails.

The ears should be checked for debris after being outdoors and cleaned when needed. The teeth should be brushed to maintain overall oral health and avoid periodontal disease.

HIGH: Although the Bernese does not have a long list of common health problems, it should be noted that high rates of cancer have reduced the breed’s life expectancy, according to surveys conducted by the national breed club.

Their health ailments may include:

Watch these babies and Berners get along:

Purebred dogs often end up in shelters or rescues for a variety of reasons, so check local resources and our adoptable dog search first to see if a Bernese Mountain Dog is available near you.

If you contact breeders, allow time to become acquainted with them, and stay alert for any signs indicating they are operating a puppy mill. If you find one of these dogs in a pet store, don’t be afraid to ask where the dog is from, and ask the store to prove it.