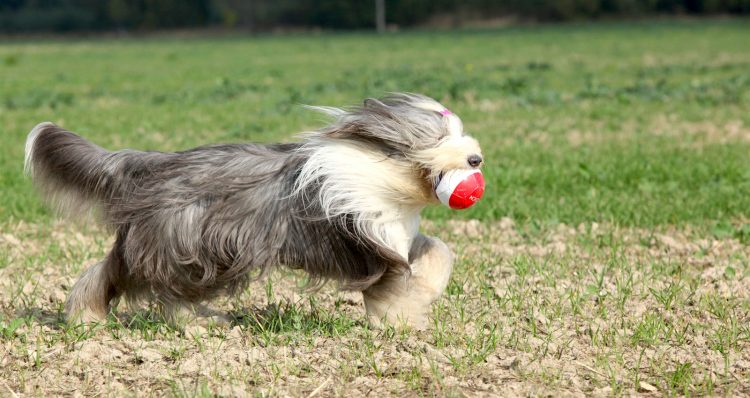 Bearded Collies are one of the oldest British dog breeds. They are medium-sized herding dogs with long bodies and agile movement. Their large nose is black, and their medium ears are covered with hair. The eye color typically depends on the coat color.

The medium-length double coat is waterproof and shaggy. They are called Bearded Collies, or “Beardies,” because the long facial hair hanging over the chin resembles a beard, a feature unique to this breed of collie. Coat colors include blue, brown, black or fawn and may have white markings. The coat color can change in intensity, usually lightening until the dog matures.

The Scottish used the term “collie” to describe dogs who herded animals. The earliest record of origin for the Bearded Collie comes from the 1500s, when a traveling seaman gave a few of his dogs to a Scottish man in exchange for livestock. These dogs were later bred with Scottish working dogs, which were said to include the Old English Sheepdog and the Komondor.

They were popular for a long period and were commonly referred to as Highland Collies. Dwindling numbers of Bearded Collies might have led to the breed’s extinction by the 1930s, but then Mrs. G.O. Willison began breeding them after World War II. This led to the establishment of the Bearded Collie Club of Britain in 1955.

The first American litter was born the U.S. in 1967. The rise in popularity of the breed led to the 1969 formation of the Bearded Collie Club of America.

The American Kennel Club (AKC) recognized the breed in 1974. The breed was allowed participation in the Miscellaneous Class at the beginning, the Working Group in 1977 and lastly the Herding Group in 1983.

This breed is active, outgoing, playful and energetic. They love the outdoors and can live outside, but they form strong attachments to their family members. They are great with children and other dogs, although they may give chase after a cat.

Beardies don’t like to be left alone or confined for a long time and can suffer from separation anxiety. Without physical and mental exercise, they can become destructive and mischievous. They need a strong, authoritative leader who can teach them obedience and proper behavior — and perhaps some tricks.

Barking is common for this breed. They’ll bark to let you know of something new, but they’re not watchdogs. They may try to herd people and other animals at times because of their strong herding instinct.

HIGH: This active herding dog needs daily exercise to expel energy. A bored and lazy Beardie can be destructive.

They are active indoors so would do better in homes rather than apartments, and a fenced yard would be ideal. The waterproof coat means Beardies are suited to a variety of climates.

HIGH: Beardies need daily brushing because the coat can mat and tangle easily. Shedding is average but can be heavy at times, which requires more frequent brushing. The coat can be trimmed every few months.

The ears, paws and coat should be checked when the dog returns from the outdoors. Look for debris, injuries and insects (especially ticks), which can be well hidden because of the coat.

Regular maintenance of the ears, teeth and nails should be done consistently. Excess hair between the paw pads can be trimmed, and bathing can be done as needed.

MEDIUM: Bearded Collies are generally healthy, but there are some health ailments that have presented in the breed, such as:

In this video, Tiffin the Bearded Collie shows off some tricks:

Bearded Collies can end up in rescues and shelters. Start your search here to find one near you. If you contact a breeder, be sure to view their facility and meet the parents of the dog who interests you.

Because of the prevalence of juvenile cataracts and hip dysplasia in this breed, ask for health clearances on the parents or the puppy if they have reached 1 year of age or older. Read this list of red flags to make sure you’re not supporting a puppy mill or irresponsible backyard breeder.