Circe, our blue Abyssinian cat, was a relationships girl. She and Phoenix, our ruddy Abyssinian male, were in love with each other from the moment she stepped into the house.

They played together, groomed each other and could usually be found snuggling together under one of the quilts (or even on the stovetop, as pictured above). He clearly regarded the younger Aby as his mate and even tried to prove it despite having been neutered at an early age.

Then Phoenix was diagnosed with kidney disease. By tweaking his diet, we kept him going for a year and a half.

Every time he came back from the veterinarian, Circe would indulge in one of her favorite rituals: climbing into the vacated carrier and just hanging out there. For some reason, she got a kick out of doing this whenever another cat came back from a checkup. “Playing fort,” I called it.

Then, one awful December afternoon, Phoenix and I went to the vet, and I returned with an empty carrier. Circe hurried over and began to head into it; then, suddenly, she paused and backed out, her adorable little face puzzled and forlorn. And she never played fort again. 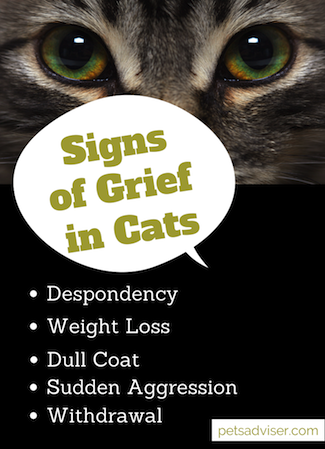 Signs of Grief in Cats

Cats do grieve, and Circe was a lost soul without her Phoenix. Sometimes I think we get so caught up in our own grief, it’s easy to forget how deeply our companion animals can be hurting.

Author Rita Reynolds devotes a chapter to the subject in her incredible book Blessing the Bridge: What Animals Teach Us About Death, Dying, and Beyond.

In it, Reynolds tells the story of Thomas, whose best buddy, Benjamin, was hit by a car. When the dead cat “was laid on our neighbor’s lawn by some thoughtful person,” she recalls, “Thomas lay down right next to Benjamin, his front paw draped across the cold body. When our neighbor found them, Thomas was so quiet she thought he was dead as well.”

The experience left Reynolds acutely aware of the need to watch for the “signs of grief” — despondency, weight loss, dull coat, sudden aggression or withdrawal — and to “take such grieving creatures right on through the resolution process.”

Her story isn’t the only one. Kaetheryn Walker, a veterinary homeopathy specialist, writes about Sam, her Norwegian forest cat, who went into a complete physical decline after his feline friend Smudge died; despite her efforts, he soon gave up the fight.

“I was so focused on desperately trying to avoid a second loss in as many days,” mourns Walker, “that I had not seen his true illness — a broken heart.” Now she knows which homeopathic remedies she would’ve used on Sam; but at the time, she was only familiar with conventional medicine, which deals with physical symptoms and not with the emotional or psychic causes of disease.

The Loss of Kittens

Sometimes adopting a new animal brings new life not only into your home, but also into the heart of a bereft cat. This tactic frequently works with mother cats who have lost their kittens.

In Of Cats and Kin, Helga Harrison recalls her cat Wellington’s behavior after her entire first litter was born dead: “She was haunched up miserably, her pupils large and black, with tears in her eyes.” Suddenly, another one of Harrison’s cats appeared with one of her newborn kittens in her mouth and put him gently down in front of the bereaved mom-cat, who began washing him. She had a kitten to love, and that was all that mattered.

In another similar case, a father cat brought his grieving mate a baby bunny to nurse. And I remember how Dawnie, my beloved red Abyssinian, seemed to ease her grief over her 5-week-old kitten, Aspen, by adopting a couple of kittens who came into the house shortly afterward.

In Circe’s case, I did what I could, and she responded as best she could. She even hung out with some of the younger cats. But within weeks of Phoenix’s passing, she too developed kidney issues.

She was dead 5 months later. Without him, her will to fight was gone. Or, as someone said to me later, Phoenix called her, and she heard him. These are the ties that bind — and cut — all of us, felines and humans alike.