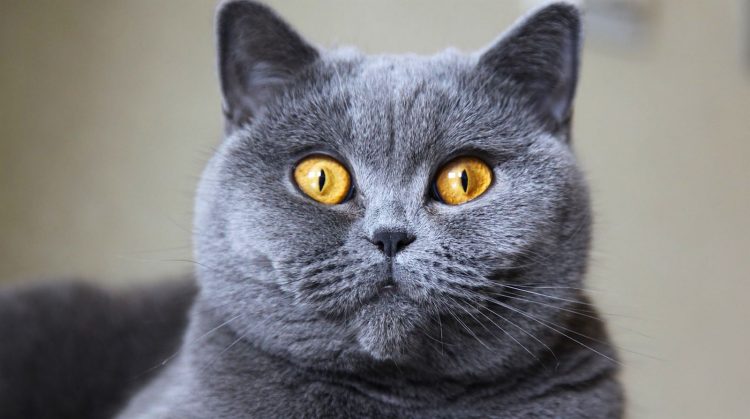 The British Shorthair is often referred to as a “teddy bear” cat thanks to the round face and dense, furry coat.

These are medium-to-large cats with a broad, deep chest and short legs that make them appear stocky and solid.

Males of this breed tend to be noticeably larger than females.

The ears are small, set far apart and rounded at the tips. The large, round eyes are also set far apart, do not squint and vary in colors between blue, orange, green and copper.

British Shorthairs have thick, medium-long tails that taper toward the rounded end and reach the shoulders when the tail is held high.

The coat is short but dense with a thick undercoat and stands away from the body — so it’s super plushy.

Coat color varies widely and can be in almost any combination, but silver and blue are the most widely recognized.

2. Where The British Shorthair Came From

According to the Cat Fanciers’ Association (CFA), the British Shorthair originated in ancient Rome.

In British Shorthair Cats, author Jill C. Wheeler concurs, adding: “The Romans [eventually] brought their cats with them to Britain. There, the cats became important mousers.”

These cats were adaptable and could live in a household as a pet or run wild in the streets. Many British Shorthairs did, in fact, take to the streets to breed with native cats.

Although a successful street cat, the breed was also one of Britain’s first pedigreed cats. In 1871, breeders started honing the pedigree and wrote the first breed standard. In the late 1800s, British Shorthairs appeared in England’s first official cat shows.

Though fairly rare in the United States, the breed was officially recognized by the CFA in May 1980.

3. How Friendly Are British Shorthair Cats?

British Shorthairs are good, calm pets for families once they move past their kitten stage.

They are affectionate, intelligent and trainable and will bond closely with their families. They usually get along with well-behaved children.

Once bonded, British Shorthairs generally like to be around their humans. They may even follow you from room to room, although they don’t like to be carried or held in laps. But they value their alone time, too, making this a good breed for a family absent from the home during the day.

British Shorthairs usually get along well with other pets ranging from dogs to rodents, rabbits and even birds.

They can be fairly clumsy, so expect a few broken knickknacks if yours tries to make long leaps.

LOW: British Shorthairs are fairly placid. Play with yours and offer regular exercise to avoid obesity. Your cat will also enjoy games that stimulate intelligence.

LOW: You should brush your British Shorthair at least once a week to help remove loose hair, but intensive grooming won’t be necessary. These cats shed a little more in warmer weather.

LOW: There are almost no known prevalent diseases. Hypertrophic cardiomyopathy (HCM) does manifest in some lines, but it’s rare.

5. Where to Adopt a British Shorthair

British Shorthairs are not as prevalent in the United States as they are in Britain. But check with your local shelters and rescues before turning to a breeder. Try Petful’s free adoption search.

Should you decide to go to a breeder, please do your research. A good breeder won’t try to sell you or let you take home a kitten who is younger than 12 weeks old.

Breeders should also have all initial vaccinations completed and full medical histories on their animals.