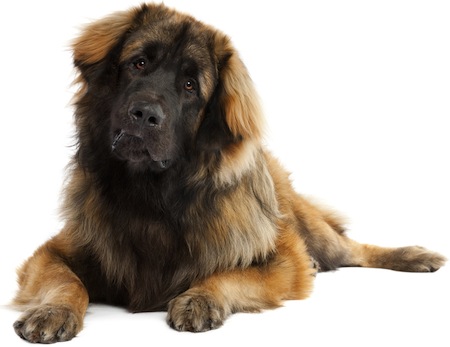 Leonbergers are one of the top giant breeds. These large, muscular dogs have a dark facial mask, and males have a longhaired chest similar to a mane that gives them a lion-like appearance. Known as “gentle giants,” they live an average of eight years but have been known to live longer.

Males average 30 inches tall while females average 27 inches. Their colors vary and include red, reddish brown, sandy and yellow brown. Their size can be intimidating as Leos weigh around 130 pounds.

Leos originated in Leonberg, Germany, in the 1800s. They were used as family, farm and draft dogs and appeared on stamps and other official correspondence throughout Germany. The dog is said to be a product of crossing a St. Bernard, Newfoundland and Pyrenean mountain dog, then crossed again with a St. Bernard. Modern geneticists have speculated that more breeds must have been involved, because the genetic evidence does not seem to support the original theory.

The first Leo club was formed in Germany in 1895. The breed almost became extinct after World War I, but two men repopulated the breed from remaining dogs they believed were descendants of the original Leos. The breed survived and was recognized by the AKC in 2010.

Leos are multipurpose working dogs and excellent family companions. They excel at therapy and rescue jobs, and their webbed feet aid in water rescues.

Described as a gentle giant, these dogs are playful, reliable, have a desire to please and love children. They are not aggressive but can be intimidating because of their size and deep bark. The breed shows an even and consistent temperament and gets along well with other animals. These intelligent dogs can get bored or destructive when isolated, so they are not recommended to be outside-only pets.

The video below gives an overview of Leonbergers and an idea of their size and playfulness:

Leos require daily exercise thanks to their high energy drive. They are also strong swimmers because of their webbed feet. As is the case with all large dogs, be careful not to exercise them before or after drinking or eating to reduce the possibility of bloat, which can be fatal.

Grooming is a daily requirement if you have a Leo. The water-resistant double coat sheds regularly and is expected to fully blow twice a year. Fur length can range from medium to long but needs daily brushing.

Leos also love digging, water and rolling in dirt, so they aren’t exactly the best for owners who enjoy spotless houses. Regular grooming should also include trimming the nails, cleaning the teeth and ears as needed and checking the undercarriage and feet for dirt and debris.

While the most common problems are bloat, hip dysplasia and nerve disorders, Leos are also noted for having allergies or sensitivities to certain drugs such as tranquilizers, anesthetics and sulfur-based drugs.

Is the Leonberger the Right Dog for You?

Leos are large dogs that shed daily and need to be with their families. We don’t recommend them as outdoor pets, or for people with meticulous homes or small living quarters, unless there is access to a park or path for daily exercise. Leos are known for being gentle pooches that are all bark and no bite, and they are an intelligent breed that trains easily with positive reinforcement. If you have the space and don’t mind the fur, by all means consider a Leo for your next pet.

If you consider getting a Leonberger for your next pet, check adoption resources first. Even purebred animals can end up in shelters. Try Petful’s adoption center.