I was driving to visit my 87-year-old Dad last Sunday, as I do every Sunday. It’s usually one of my NPR-listening times, and I caught the famous This American Life on the radio.

But there was a twist. Someone was interviewing Ira Glass, the host, instead of the other way around.

If you aren’t familiar with the program, Ira Glass, in an inimitable voice, narrates oddball stories about regular people. He sounds like he was raised by intellectual Martians who expatriated to the Upper West Side of Manhattan. He actually grew up in Baltimore.

Ira Glass was talking about his pit bull, Piney.

In his oh-too-blasé voice of bored neutrality, I actually sensed some emotion as Ira talked about the constantly muzzled, Prozac-taking, kangaroo-eating pit bull that has changed his and his wife’s life. Mostly for the worst.

In a nutshell, Ira and his wife adopted a pit bull pup some seven years ago, and took him to some kind of a wedding celebration with children soon after, where Piney bit two of them.

The inference is that the wedding incident changed Piney forever. He has subsequently bitten both Ira and his wife, Anaheed, and several other people.

Ira referred to these bites as “nips.” Nancy Updike, the This American Life interviewer, insisted that if the act draws blood, it is a bite. Ira decided they should be classified as “bloody nips.”

The owners have sought multiple trainers and veterinary advice without improving Piney’s behavior to a socially acceptable level, and the dog’s health is a big problem as well. While it is clear Ira Glass is dedicated to this extremely problematic canine, he seems clueless, or irritatingly smug, about Piney being a walking time bomb.

Ira and his wife now live in a New York City apartment with Piney, in seclusion. No visitors allowed.

When Piney sees the light of day, he is muzzled. Ira recounts an incident when, after an early-morning walk, he and Piney returned to the apartment and Piney turned on him.

Ira believes the dog was guarding the sleeping wife. He tried to divert Piney’s attack into a tug-of-war play.

Cesar Millan-like trainers, or many less celebrated trainers with many differing philosophies, are probably tearing their hair out by this point in the broadcast.

Toward the end of the segment, the real meat of the problem came to light. How do Ira and his wife justify this type of existence, for them or the dog? Why do they keep doing it? That’s what Updike, a producer who has known Ira for a long time, couldn’t comprehend. Her lack of understanding offended, or seemed to hurt, Ira. This was his explanation:

“It’s really sweet to have this animal that trusts no one and is alone in this world except for us, and he trusts us.”

He raveled on about Piney’s helplessness and dependency.

The interviewer responded, “It’s interesting that you consider him helpless, though, since he lunges at you every day. And you see helplessness behind I think what other people see as aggression.”

This mixture of responsibility and guilt, of love and affection, of fear and heartbreak, is what I face with a small, sad number of clients each year.

If trainers, drug therapy and/or the owners don’t improve these dogs with dire behavioral challenges, the dog is going to hurt someone. Then, the owners may have only one recourse, despite their years of anguish and vigilance.

I did not hear Ira Glass expressing legitimate concern about the damage a dog like Piney can cause.

I thought about the times I have been on the other side of the exam table, faced with desperate owners who are ready to euthanize their version of Piney, because the dog finally mauled somebody, often a family member.

I have been bitten only a few times, but there have been many close calls with aggressive dogs. These are not cases of white coat fear. These dogs have bitten before. They are dangerous. Too frequently, their owners don’t take the bite potential seriously. Maybe they get some sick, narcissistic glee out of not warning people.

Luckily, most of us professionals have a very keen sixth sense about dog signals. Self-preservation of our hands and faces is a good instinct.

But what about dogs like Piney owned by people like Ira Glass who refer to the bites as bloody nips?

I saw a picture of Piney with a plastic basket muzzle. I don’t know if the muzzle is sufficient protection for the threat he poses. And what about the day there’s a stranger in the hallway, and Anaheed forgets Piney is by the door? What if Ira doesn’t pick up Piney’s hairy eyeball when he’s “guarding” Anaheed, and the dog delivers more than a “bloody nip” to his hand?

Perhaps he feels he doesn’t need nerve function in his hand since he’s a radio personality.

I am very familiar with people who call their aggressive dogs “misunderstood” or “confused,” or blame the human for not “reading” the dog properly. This is irrational justification. People who have aggressive dogs need to own up to the threat and be ready to accept the consequences if a tragedy happens.

I leave you with two stories …

Vietnam Vet Bob made an appointment with me, demanded it be me and refused to tell my staff what it was about.

He brought in his 11-year-old pit bull, one of my favorite patients. She licked my face.

The dog “didn’t like” some people, but it was strange dogs she really hated. Veteran Bob took this dog aggression extremely seriously, and there had not been an incident for many years.

But this week, the screen door hadn’t closed all the way. Sadie bombed out of the front door. Within a few minutes, the miniature dog being walked on a leash on the sidewalk was dead. It was Sadie’s last day on this green earth.

Bob could not live with the threat of it happening again, or the guilt that it had happened at all.

My Last Day With Molly

A client I had known for many years came in with her 8-year-old springer.

I “respected” Molly because I knew she had bitten, and the eyeball stare she gave me was a clear sign to be careful. It was also clear my client had been crying.

Her daughter, who had grown up with Molly, had come home from college. Earlier that day, the daughter wanted to stretch out and needed Molly to move to one side of the bed.

The daughter didn’t come to the appointment because she was still in the emergency room. Her hand that she placed on Molly, asking her to move over, had been mauled.

These were good owners, and they were vigilant most of the time. But a tiny break in the monitoring system of such a dog is within the realm of human error.

This is what I did not hear in the Ira Glass interview. At least it wasn’t evident during the broadcast. On the wife’s blog about Piney (now deleted), there’s one post about how annoyed she is about workmen hanging out by her front door. She muses about “forgetting” Piney’s muzzle one day. 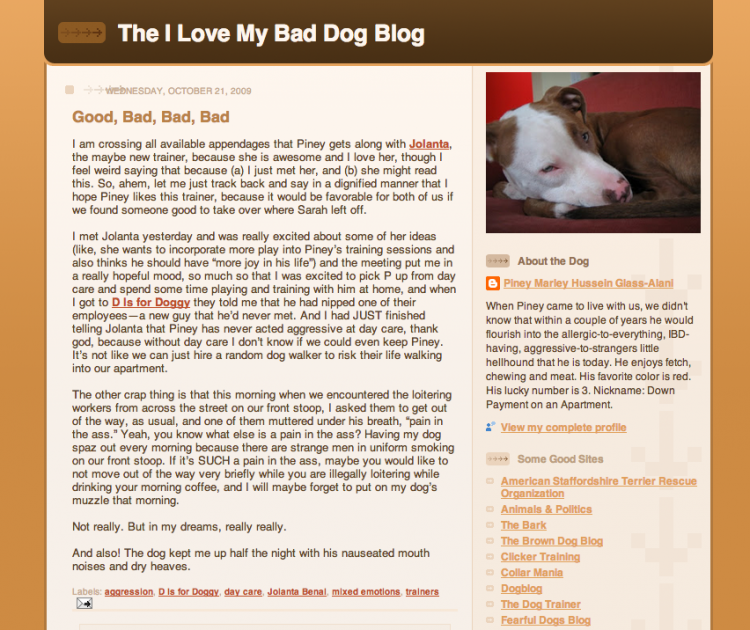 Piney’s aggression and the risk of owning such a dog is not just about how it affects Ira and Anaheed. It’s about social responsibility. But you know me and my love of dogs. ALL dogs deserve a good life.

I’m thinking about this now from Piney’s point of view. Is this the life he wants?

His neuroses have been festering and may be beyond rehab. A 12-step program, perhaps? A second chance?

I’m worried he’s on the eve of destruction. I feel very sad for Piney Winehouse.