My daily schedule usually includes at least one ferret appointment, and the ferret is often sick. Next to the name Bandit, Scamper or Rascal, we often have to write “ADR” (ain’t doin’ right) or “SBI” (something bad inside).

Let’s do a little history on the rise of the ferret as a beloved pet.

The ferret craze rose steadily through the ’90s, despite local ordinances outlawing them. Massachusetts, where I practice, was one of the last states to legalize ferrets. They are still illegal in California. I actually received a personal call from my state representative the day Massachusetts lifted the ban on ferrets. My rep knew how many “illegal” ferrets I had been treating.

These funny little pranksters were sold by pet stores as an easier alternative to a dog or cat, and “more fun” than a guinea pig or hamster. Ferrets do make great apartment pets, and are frequently purchased by people who feel they don’t have the room or finances to care for a dog or cat.

Ferrets are now the third most common pet following cats and dogs, and it’s absolutely no surprise. They are adorable, funny clowns. Show-offs, mischievous, inquisitive. Open a drawer? Enter one ferret. Throw a piece of paper in the wastebasket? Follow one ferret into the trash. Check out Kristine’s article from last year titled “Proper Ferret Care” (don’t miss the videos either).

Newbie ferret owners often have no idea that a pet with so much spunk and vitality has a good chance of becoming ill at a fairly young age.

Because ferrets were supposedly so easy to care for, took up very little physical space and were very social, many owners thought, “Why have one ferret, when I can have four, or five, or six, or 20?” I began to see many multi-ferret households.

What happens with most fads? They die down.

What happens when you’re tired of your funny ferret in a cage and the economy tanks? You want to get rid of your fad ferret that’s costing you money.

Many regular shelters were not set up to accept surrendered ferrets. Since ferrets are such charming and loving little animals, many multi-ferret households became pseudo-ferret shelters. Some of these household shelters had more than 30 ferrets at a time, a veritable ferret herd!

As the ferret craze continued, I was seeing more and more well-cared-for ferrets developing serious, expensive-to-treat diseases by the time they were only three or four years old. Most of the original unsuspecting owners had bought their ferrets from a pet store employee who told them ferrets generally live a healthy life up to about nine or 10 years of age. In reality, six to seven years is a more likely lifespan.

But at three or four years of age, many ferret owners receive the news that their ferret has a serious and costly condition. Think about how quickly three years of pet ownership flies by. To get the news that your ferret is suffering from pancreatic disease, adrenal disease or cancer at such a young age is a shock.

For the less ethical owner, this news of disease, with its price tag, means more ferret abandonment. Many of my ferret do-gooders learned that more and more ferrets were being “dumped” on them because their owners found out the ferret was sick and needed veterinary care.

Ferret Health Problems: Why So Many?

The majority of ferrets raised to sell in pet stores come from large ferret farms. Without naming names, I’ll say that you can easily search the controversy regarding the ferret industry and the accusations of abuse. These ferret farms often produce lab animals too.

Suffice to say that these are ferret and animal factories. These little characters are spayed or neutered at a very early age so they can hit the pet store floor when they are still adorable “kits.” Inbreeding and the early spaying/neutering at these farms are thought to be two big reasons so many American pet ferrets are developing common ferret health problems like insulinoma (pancreatic tumors), adrenal disease (adrenal tumors) and lymphosarcoma (cancer.)

Insulinoma, in simple terms, is the opposite of diabetes. Instead of high blood sugar, ferrets develop low blood sugar, which makes them extremely lethargic.

As the disease progresses, it causes seizures because the ferret cannot keep his or her blood sugar above the seizure threshold. For diabetics, this is known as “insulin shock,” because they took too much insulin or didn’t eat enough. For ferrets, this occurs naturally because their pancreas has a tumor in it producing too much insulin.

Neither surgical nor medical options “cure” the problem. We can only control it.

Adrenal disease in ferrets is caused by a tumor in the adrenal glands, tiny glands that sit on top of the kidneys and produce hormones.

Adrenal tumors can cause many symptoms, the most obvious of which is hair loss. Many of these ferrets feel okay in the beginning of their disease, but look pretty sad. A bald ferret loses some of its aesthetic appeal!

Lymphosarcoma is cancer of the lymphatics, and can manifest itself in many ways. Chemotherapy is the treatment, a difficult task in an animal often weighing less than two pounds.

Although many more veterinarians are seeing ferrets, depending on where you live, it can often be a challenge to find a vet who feels comfortable treating advanced diseases in ferrets. If you’re talking about chemotherapy for lymphoma or specialized drugs and surgical procedures needed to treat adrenal disease and insulinoma, you need a veterinarian with a ferret specialty.

Even after all these years of ferret popularity, if one of my ferret patients gets sick on emergency when I am not available, our local emergency specialty hospital may not be willing to see them. My patients sometimes have to travel 90 minutes or more to be seen in an emergency by a qualified exotics veterinarian.

Can I Get a Healthier Ferret?

An alternative to a farm-raised ferret is a ferret raised by a small-scale, private breeder. These ferrets should be less prone to the diseases mentioned above, but are more difficult to locate, more expensive, and you may be responsible for spaying or neutering them once they are a little older.

Spaying and neutering is extremely important in the ferret, but the mass ferret producers perform the surgeries too early. Female ferrets must be spayed or bred. Otherwise, they suffer from a form of estrogen toxicity and become fatally ill. Intact male ferrets will fight and stink even more than a neutered ferret! 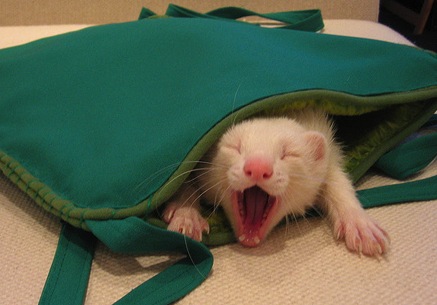 Ferrets have an odor, plain and simple. This odor bothers some people more than others. Call it musky, call it dank, call it… SPECIAL! Spend some time with a ferret inside a home before you get one of your own.

Ferrets may bite. Some young ferrets require more bite training than others. Most ferrets are not biters, but take it from personal experience: a bad ferret bite is a SPECIAL experience I will never forget.

Ferrets can have litter box issues. Although they can be trained to use a box most of the time, ferret poop has a consistency that is, well, SPECIAL! They like to shimmy up to a corner of their cage, or your bedroom, and sometimes they like to pick the corner WITHOUT the litter box, if you get my meaning.

Ferrets can be great fun. They are loving little creatures. Just go in with your eyes wide open. Ferret owners are a particularly gregarious and info-sharing group. If you are seriously considering adding a ferret to your family, get online and have a chat.

Now that I have given you the real deal about potential health problems in the Mustela putorius furo, find out why they are named “smelly little thieves”!