Have you agonized for days over what to call your new pet?

When you value a pet as a family member, you take care over choosing names. However, subconsciously, it seems wider society can influence our choice.

Just as there are for children, there are trends for pet names.

But what makes pet names even more interesting is how they change over the decades and what this says about a pet’s place in life.

In this guide to choosing a good name for your pet, we’ll cover:

Part 1: How Pet Names Have Changed Over Time

For years now, we’ve been moving away from names like Fido and Spot toward classic “people” names for pets.

To illustrate how pet names have evolved over the years, let’s take the example of presidential pet names.

In all, there have been more than 100 “First Dogs” in the White House. And 30% of those presidential pups were given human names, such as Barney, Millie or Charlie.

Most of these human-like names were given to pets who lived after World War II. This points to a trend — going back several decades — of pets having human-like status.

OK, so what about pet names before World War II?

Again studying those presidential names for clues, we find some particularly quirky names. These include:

All of this raises a thought about whether the fun has gone out of dog names by opting for human ones. Do you still strive to find an interesting or quirky pet name?

Why We Choose Certain Pet Names

At a recent meeting of the International Society of Anthrozoology, researchers looked into what influences our choices:

People with a strong creative streak are more likely to buck these trends with novel names.

The Characteristics of a Good Pet Name — For Dogs and Cats

Take a quick look at any chart of the most popular pet names, and those human names dominate.

But a couple of things seem to make a name extra appropriate for a pet.

Part 2: How to Choose a Good Name for a Dog

It doesn’t matter if your new dog is from a shelter, a rescue organization or a breeder — all dogs need a name.

Depending on the circumstances, your dog may have a name from their previous family, a name given by the rescue or shelter, or no name whatsoever.

If your pup already has a name, you always have the option of changing it to something you like or a name you think suits your pet’s personality better.

Here are a few tips for choosing a good name and helping your dog get accustomed to their new identity:

Obedience cues should be very recognizable and separate from your dog’s name, so choose a dog name that doesn’t rhyme with a common command.

2. Avoid names that are the same as those of friends or people in your household.

If you choose your husband’s name, your dog will get pretty confused when he is told to empty the dishwasher!

3. Short, 1- or 2-syllable words are often easily recognizable by your dog.

So if you want to speed up the time in which your dog learns their name, choose something simple like Bear or Brody.

4. Consider the sound of the letters.

Hard vowels (e, a, i , y) and consonants (d, t, k, b) are easier for a dog to hear than are soft vowels and consonants. Therefore, Toby may be more recognizable than Florin.

5. Choose a dog name you won’t mind saying in public.

If you choose an inappropriate or embarrassing name for your dog, you may not want to say it in a crowd of people.

6. Consider waiting 1–2 weeks before deciding on a name for your dog.

Let’s say you discover during this time that your new pup is a sweet, timid little Princess. If you had decided early on to call her a more masculine name like Harley, it wouldn’t have suited her well.

Want more inspiration? See our full list of 100+ of the best dog names on the planet: 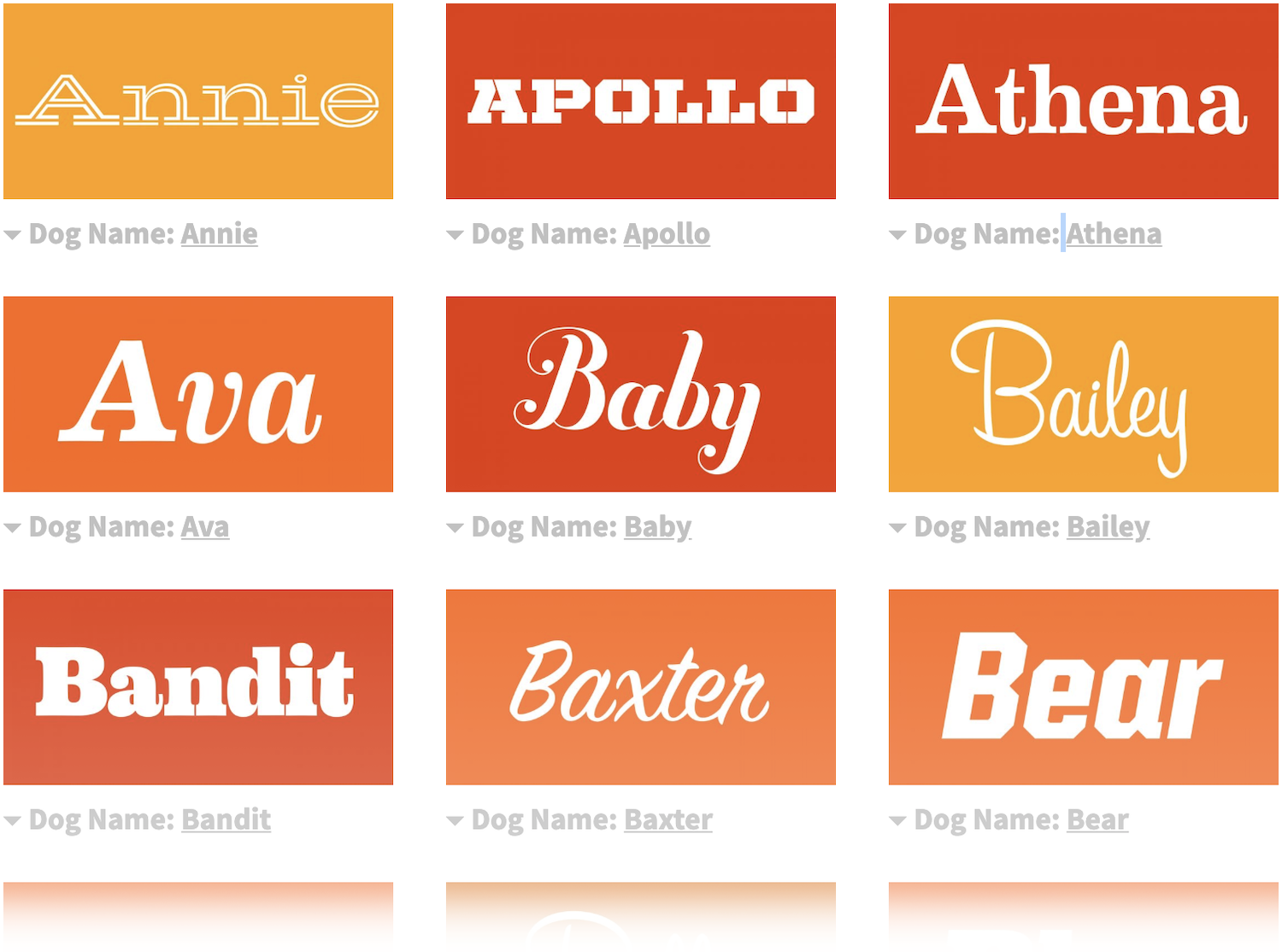 Show Me the Names

How to Get Your Puppy Used to Their Name

If this the first time your dog has had a name, it may take a while for them to learn their identity.

Here’s how to train a puppy to know their name:

How to Get a Dog Used to a Brand-New Name

Sometimes people don’t like their dog’s name but they don’t want to change it because the dog already knows it. But it’s never too late to change your dog’s name.

With the right type of training, it can be easy to teach a dog to respond to a new name.

Here’s how to train a dog to recognize a different name:

If you have been doing the exercise correctly, the dog should respond to the new name — keep rewarding graciously when this happens.

One Note About Changing an Older Pet’s Name

An important element to consider when deciding whether to change a newly adopted pet’s name is their mental health. Shelter/rescue pets who come from stressful environments may need the stability of their old name to help them adapt to a new home.

Likewise, if an animal has an anxious personality, it may be wise to forgo changing their name until they settle in.

What About Cat Names?

Many of the same tips above apply to cats as well, particularly ending the name in a “y” or long “eee” sound.

Of course, some animals respond better than others to a name change. Dogs are usually easier to train. In comparison, cats can be more difficult to train, so it may take longer for them to respond to a change in name.

Kittens will be more responsive to a name change because they haven’t had the name as long. (Other animals who respond well to new names? Rats and rabbits.)

The important thing to remember is all animals respond differently. The best thing you can do for them is be patient and understanding while going through the transition.

Part 3: More Inspiration for Your Pet’s Next Name

Coming across a Buddy or Bella may not be very uncommon, but how many pets named Khaleesi have you met?

Here’s some additional inspiration if you’re looking for a more creative pet name.

10 Unusual Pets’ Names and Their Meanings

The origin of many names may surprise you. From pop-culture references to ancient hero inspirations, pet names can be fascinating and sometimes even may require an explanation.

The following pet names are unusual, but they’re not without their own stories.

Tripp is a cute, bright-eyed and rambunctious hound mix who spends hours mingling with other dogs at the park. And his human is a friendly retiree with a white handlebar mustache and an ability to carry on endless conversations.

It’s a simple, staccato word, but here’s what the name Tripp means: It’s a nickname given to people (men, mostly) who are the third generation of that name.

For example, John Smith III could be referred to as Tripp. “It’s a shortened version of triple,” Tripp’s human says.

Have you ever met a pet named Satchmo? That’s a pretty unique name for a dog or cat.

Satchmo is a shortened nickname of Louis Armstrong. The musician’s original nickname was Satchelmouth and it was shortened to Satchmo. Armstrong was, apparently, very fond of the nickname.

This pop-culture reference has become a popular name for female dogs and even baby girls. It’s a reference to the hit TV series Game of Thrones and is a title of royalty for one of the main characters.

Another trendy name from the series is Tyrion and, from what we’ve seen, it’s starting to pop up in pet households as well.

A popular name for huskies and other cold weather breeds, Balto was the name of a sled dog credited with leading his team through the bitter cold to save the children of Nome, Alaska.

In 20 hours, Balto crossed 674 miles, delivering the medicine that was needed after diphtheria struck the city in 1925.

His courage hardly went unnoticed, inspiring an animated movie and 2 sequels. You can find a statue of Balto in New York City’s Central Park. And if you actually want to visit him, you can. After his death in 1933, Balto was mounted by a taxidermist and is on display at the Cleveland Museum of Natural History.

Now Balto’s legacy also lives on through the dogs who were named after this canine hero.

This is another pop-culture reference that’s inspired by Latin.

Remus Lupin is a character in the Harry Potter novel series (and movies). If you’re curious why anyone would name a dog after this character in particular, it might help to know that he was a werewolf in the stories.

That’s also where the Latin inspiration comes from. The Latin word lupus means wolf, and the word lupine means wolf-like.

Lupin is an apt name, then, for a werewolf. And a clever name for a dog.

Beowulf is a legend. No wonder so many awesome pets share that name.

Whether based on a music festival or a cartoon bird, the name Woodstock dates back to the 1960s.

But you don’t have to have been there to be able to appreciate the cute simplicity that Woodstock offers as a pet’s name. Charles M. Schulz didn’t. The Peanuts artist named his iconic yellow bird after the music festival.

You have to admit, Woodstock is a great name for a pet — whether that pet has feathers or fur.

Tailchaser, a cat in Tad Williams’s Tailchaser’s Song, is a dreamer with a purpose. A number of cats from his clan have gone missing, including his love. So he sets off to find her and, in the process, comes face-to-face with the evil at the root of all the disappearances.

Firestar is a pet kitten who leaves his home to join the Thunderclan, one of the cat clans chronicled in Erin Hunter’s popular Warriors book series. He trains as a warrior and eventually becomes a brave leader. He is also very compassionate and works hard for the common good of all the clans.

Here’s yet another literary pet name. Macavity — a character in T. S. Eliot’s Old Possum’s Book of Practical Cats — isn’t quite as malevolent as he’s portrayed. Yes, he’s a master criminal. But he has a certain raffish charm that is appealing.

The list of unusual pet names could go on indefinitely…

Sometimes the choices are a perfect fit, and sometimes they just have a few too many syllables. Regardless of how unique a name sounds, the pets are really what make the names special.

When all’s said and done, pick a name you like and that suits the animal. This can be harder than you’d think.

Here’s how one of us named her pets:

And what if you shorten those names and add a “y” to make that long “eee” sound? Widget becomes Widgy. And Gravos becomes Gravy.

In closing, choosing a name for your pet can be fun. You typically get a lot of suggestions from your friends and family, but go with your gut.

Chances are you are going to be living with this new member of your family for multiple years, so choose something you like.