Banjo is my running partner. Except for extremely hot or humid days, if I’m out running, this sweet Boxer is right beside me.

We run almost exclusively on a paved asphalt trail, where Banjo has plenty of opportunities to jog along the grass on the shoulder of the trail. For the majority of our runs, though, she’s plodding along on that asphalt.

Not too long ago, I took her for a nice 10K run and noticed she was slowing considerably on our return, tugging to remain in the grass.

I took a look at her paws and found that a couple spots had rubbed raw on the asphalt. I felt like the worst human ever.

Putting aside my shame, I started thinking up solutions.

According to the product description, Musher’s Secret is more than just a barrier to keep your pup’s paws safe from ice, snow and salt. It also protects from “hot asphalt in summer.”

I wasn’t sure if that included protection from friction, chafing and abrasions, but figured I could give the wax a try.

At least Banjo’s paws would have more protection from the hot trail.

I bought the smallest size — 60 grams — and applied the wax for our first run.

This was my initial impression: 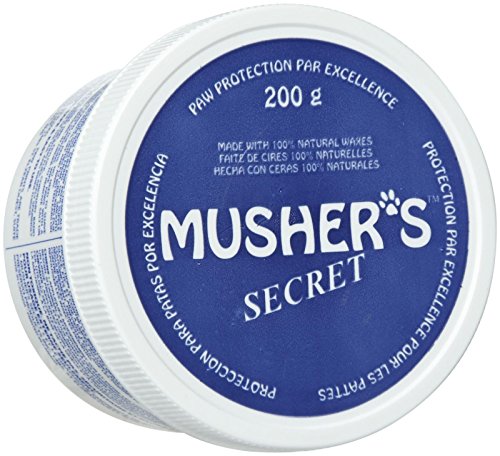 My Dog’s Reaction to Musher’s Secret

We all know that new products don’t really pass the test unless our pets approve.

I applied the wax to Banjo’s paws every day before our runs.

Immediately, I noticed her pads became softer with continued use. They felt like puppy paw pads again. Then I noticed that she was pulling off into the grass less frequently.

Gradually, I increased our run distance, from 3 miles to 5 miles. Finally, we even got in a few 10-mile runs. I applied Musher’s Secret before heading out the door for each run.

After 3 months of continued use, Banjo has only had 1 chafed paw after a run, and it was a day that I forgot to apply the wax.

I’m confident that Musher’s Secret has helped us continue our running tradition. But I also know a lot of people use this wax to keep their dogs’ paws safe in winter conditions.

However, spending a lot of time outside in those conditions can lead to a real problem with ice buildup around the dogs’ paw pads.

The skiers have tried 2 remedies: dog boots and Musher’s Secret. According to Dad, “Boots work better, except we’ve yet to find a pair that will stay on.”

And as far as the Musher’s Secret goes, he says:

“In cold, dry snow conditions, wherein the ground beneath the snow is frozen, Musher’s Secret works great on all our dogs. However, in situations where the dogs’ feet may get wet (unfrozen ground beneath the snow, creek crossings, etc.), thickly furred pads will ice up, but the shorter-haired pads are much less affected. Trimming the fur between paw pads helps a great deal. Slathering on the Musher’s Secret also helps dig out the snow and ice when they do get packed.”

Musher’s Secret won’t protect against everything, but it’s a pretty solid defense if you want to take your dog out and keep those paws protected.

In my experience, the application is easier than trying to force boots on your pup’s paws, and you don’t have to worry about the boots falling off. But if you forget to apply Musher’s Secret (as I have), you’ll be leaving those paws defenseless.

All in all, I’m happy I gave Musher’s Secret a chance and will pick up an extra container to keep in my car in case I forget to apply it at home.

Update: A reader asked, “I’m wondering how you remove it, as I have heard it can get messy on the floor after the dog has worn it.” Here’s my reply: I actually haven’t had to remove Musher’s Secret. I apply it only before going for a run or walk with Banjo, so she’s primarily outside after the application. Even for the few minutes she’s inside after it’s applied I haven’t noticed any mess. The wax seems to act like a lotion. It protects her paws but also leaves them really soft afterward. When we get home after our runs, she takes her usual place on the couch, and there is never any wax residue on the upholstery.