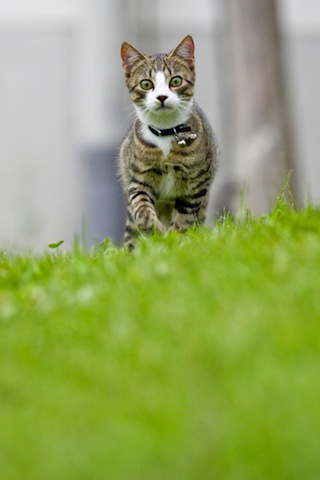 You may have noticed a unique sound coming from your kitty’s throat, along with a quick movement of her lower jaw. While this sound is all about prey, be it bugs or birds, some cat owners liken it to the sound a dolphin makes. Have you ever wondered, “Why does my cat chirp at bugs?”

Here are some other words pet owners have used to describe this sound:

Chirping, although generally associated with birds, is a feline behavior that is not thoroughly understood. It occurs most often when the cat is excited by prey or else frustrated from not being able to get to the prey.

The chirping sound of a cat is usually made when her eyes spot what she may consider good prey. Whether she is outside or sitting inside, gazing out the window (taking in all the action going on in the great outdoors), you may spy her tail getting all puffed up or twitching in a certain way. She begins making those chattering noises in anticipation of perhaps catching a squirrel, bird or other small creature that is roaming around the yard. If your cat is inside, perhaps there’s a bug of some sort crawling along the floor, wall or ceiling.

My son tells me he once noticed his kitty chirping from another room. Curious as to what was bringing about this kind of language, he decided to investigate. Upon entering the room, he saw his cat — eyes fixated on the ceiling — watching a moth fluttering around.

At first, these chirping sounds seemed kind of weird to him, but my son has now become used to the noise and realizes it is a natural behavior. (By the way, sometimes the cat gets her prey, sometimes she doesn’t. But the chirping eventually stops.)

Check out this quick video of a kitty chirping over… rays of light:

You Can Try Chirping Back

Also my son shared with me the story of a pet owner whose cat chattered to bugs she stalked inside the house. To save herself the trouble of killing the bug, the owner would imitate the noise and her kitty would come running to save the day.

This little setup worked well for both parties. How wonderful it must have been to have not only an adorable cat, but one that was on 24/7 pest patrol!

So, Why Exactly Do Cats Chirp?

Here’s a likely reason: They’re practicing the “kill bite.” Feline behavioral specialists tell us that the muscle movements involved during chirping are very similar to movements seen with the special neck bite that cats in the wild use to kill birds and small rodents. In other words, chirping cats — frustrated because they can’t quite get to their prey — are using those same muscles they would use if they were killing the prey.

“Why does my cat chirp at bugs?” seems to be quite a question! To many of us, the mystery behind this particular vocalization of cats (strange, yet a little comical) will never be completely solved. Does your cat chirp? Tell me about it in the comments below!