My Chihuahua, Angel, never ceases to amaze me. I am sure that most dog owners are in awe of how much like us our pets sometimes act.

On occasion, Angel will become engrossed in a television show. (Her most liked shows seem to be the ones with barking dogs in them.) Yet, at other times, she pays the TV absolutely no attention. Once something on television catches her undivided attention, she will watch for quite a while.

Sometimes I just sit quietly — a little distance from her — and watch her as she watches TV. Eyes focused on the screen, she seems to be in a daze, not blinking an eye, as if her mind is miles away. Then she will cock her head, looking at the screen from a different angle, and I realize that she is very much into the program on television.

Honestly, there have been times when I’ve called her to come to me, and she would look back as if to say, “Puh-lease, can’t you see I am watching TV?” — which, by the way, is the same reaction I get from my husband when he is watching a football game!

The TV Looks “Jumpy” to Dogs

According to Stanley Coren, Ph.D., F.R.S.C., whether or not dogs take an interest in television programs depends upon a number of things, with the main factor being the dog’s visual abilities.

Research has shown that watching TV may not be easy for dogs. Images on a television screen are refreshed 60 times per second, making them appear as a continuous picture to humans. However, dogs can detect a flicker of light that refreshes as quickly as 70 times per second, meaning those images on TV appear jumpy and less real to them.

But Aren’t Dogs Color Blind? (No)

Contrary to popular myth, dogs do see color, just not as much as humans do.

While a dog can see the color blue clearly, reds, yellows, and greens all look somewhat the same to them: 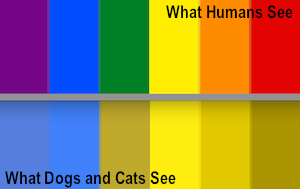 Humans have three types of cones at the back of their eyes, which give us the ability to see a rainbow of colors, whereas canines have only two types of cones. 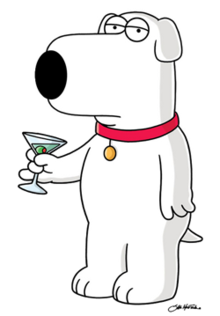 This difference is the dog’s ability to see and interpret moving images. He may see the “cartoon” dog in movement, but he is able to recognize that the movement is not that of a live animal. So your dog probably won’t be too interested in the antics of Brian, the dog from Family Guy.

A TV Channel Just for Pups

A new “breed” of TV is now available for dogs. DogTV contains content that is designed to accommodate our four-legged friends. The colors, sounds and camera angles are geared to bring interest from our pets.

This cable channel (there’s an internet channel too) aims to make television more appealing to dogs. The shows provided on DogTV are intended to keep pets relaxed, entertained and stimulated so they never have to feel all alone.

Of course, you shouldn’t let TV time replace the quality time you spend with your dog. For playtime and exercise, there’s no substitute.

As I stretch out on the couch to enjoy a little TV time for myself, I notice Angel lying on the floor, already watching TV. Suddenly, a thought crosses my mind — what if someday our pets learn how to operate the remote control?

Now that could cause some problems.