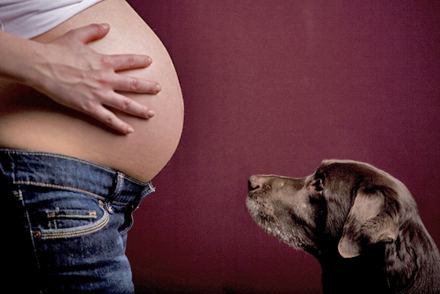 Pregnant women often insist that their dog is the first to realize that they are expecting. Some dogs suddenly become extra protective of their pregnant owner and often have the urge to lie against her swollen belly with an ear next to the womb.

Although it is inconceivable that a dog actually realizes that in nine months the family will have a new addition, he can pick up on mood changes, body chemistry and behavior, which may clue him in that a change is going on.

Can Dogs Hear Babies in the Womb? Probably.

The fact that canines can recognize changes in weather well before humans has always been intriguing. Nowadays, it has been determined that dogs can detect cancers in humans, as well as give warnings of impending heart attacks or seizures. So it should not be surprising that dogs can hear babies in the womb.

Human babies cry inside the womb, as early as the 28th week of pregnancy. Their response to loud noises bring about in utero crying, which a dog may be able to hear.

Some people wonder if dogs can hear a fetal heartbeat. That’s not likely. However, it’s safe to say your pet is aware on some level of the changes your body is undergoing.

A dog’s sense of smell, which is also much stronger than that of humans (at least a million times better!), may enable them to “smell” a pregnancy through hormonal changes in the body of the mom-to-be. According to Dr. Raymond Van Lienden, DVM, “Just because we do not consciously react to these, it is not unusual for animals to react.”

Whether it is because of the sound of the baby crying in the womb, a certain smell or hormonal changes in a pregnant woman’s body, some dogs do become noticeably overprotective of their expectant owner. Growling, barking and even blocking the way so others cannot get near Mom are common behaviors of our canine pets.

Yet Another Way Dogs Can Help

Did you know that having a dog is beneficial for your pregnancy? A study has shown that pregnant pet owners are more likely to get the recommended amount of daily exercise. This video explains:

And How Cool Is This?

Get this: Your baby can hear outside noises from the womb. So in a way, your dog and your baby can communicate with each other!