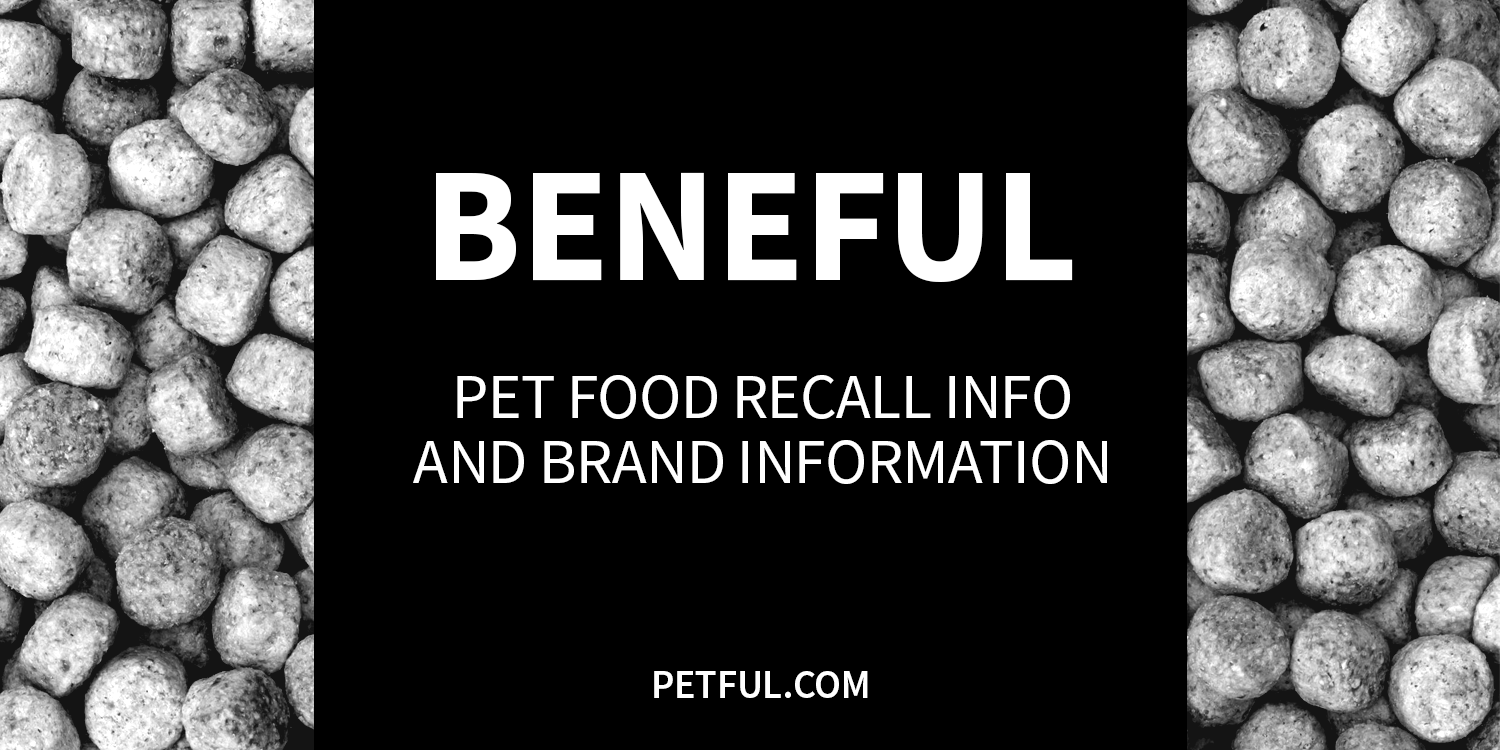 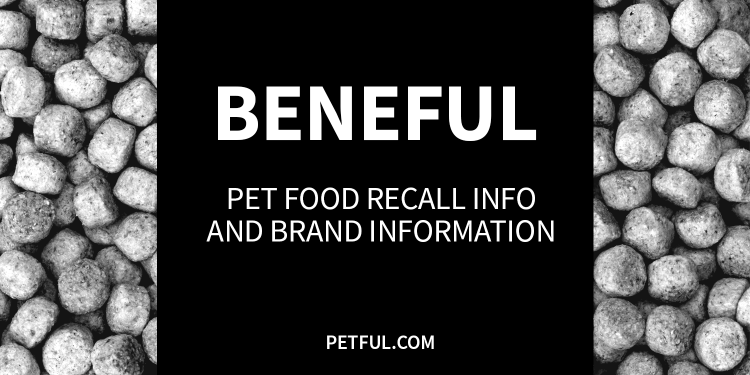 Beneful, a Purina brand of dog food, is owned and operated by the Nestlé Purina PetCare Company. The line was created in 2001 and was considered Purina’s most successful dog food launch in at least a decade.

Beneful is designed to fill dogs’ bowls with intriguing shapes, textures and colors.

Beneful has been recalled once — in March 2016. You can learn the details about that recall below. In addition, over the past few years, hundreds of consumers have complained that their pets were sickened — or worse, died — after eating Beneful. However, Nestlé Purina maintains that there is nothing wrong with the products.

Below, we share more information about the history of Beneful — including up-to-date Beneful dog food recall information.

In recent years, pet parents began clamoring for pet food that looks, smells and tastes much like their own food.

As the 21st century approached, many people were already making their own dog food at home, using ingredients they identified as human food.

Few pet food products leveraged this trend more successfully than Nestlé Purina PetCare Company’s Beneful brand, which had its big debut in 2001. Back then, Purina was known more for its Dog Chow and Cat Chow lines but was losing market share to Iams.

Beneful, named presumably to sound like “benefit” and “bountiful” simultaneously, purported to be a meal just like the one the human family was eating.

From its inception, Beneful has been marketed with some of the most ingenious and innovative advertising strategies ever.

The dog food was purposefully designed to look and smell like stew.

In 2006, Nestlé Purina improved on this marketing strategy by adding “Prepared Meals” formulations. The food was packaged in plastic tubs with clear cellophane lids that allowed people to see the food they were buying right in the store.

The company said it enlisted consumers to provide input into the recipes. These recruits chose the ingredients they wanted for their dogs from a “farmers market” list of ingredients. Animal nutritionists followed up to make sure the meals contained complete nutrition.

In 2011, Nestlé Purina experimented with advertising directly to dogs through hearing and smell.

In Germany, a series of posters were doused in Beneful, with the hope that dogs would catch the scent and lead their people to the posters and, thus, to the product.

The ad featured abrupt pings and squeaks along with a high-frequency tone that was barely audible to the dogs’ humans.

One theory behind this marketing strategy was that dog and human could both enjoy the advertisement as a shared experience. Another theory was that dogs could potentially nag their humans for an advertised treat, much as children do.

In 2012, Nestlé Purina boldly attempted to sell Beneful by selling dogs — sort of.

To that end, the company erected giant electronic billboards that featured active dogs running and playing in a large meadow. The campaign launched in various major cities, such as New York City.

The billboards were targeted at pedestrians. When, for instance, someone approached the billboard, a virtual dog came running out alongside them, inviting them to play. Much like the Wii Sports video game, the digital installation allowed people to throw a virtual ball that the virtual dogs would then retrieve.

As of 2020, Nestlé Purina PetCare was the No. 2 pet food company in the world, with nearly $14 billion in annual revenue, according to data provided by Pet Food Industry.

At the No. 1 spot was Mars Petcare Inc., with annual revenue of more than $18 billion.

What’s This I Hear About Beneful Making Dogs Sick?

Beginning around 2011, a large number of online complaints about Beneful dog food rolled in from consumers.

Nestlé Purina has insisted there is nothing wrong with Beneful, calling many of the complaints “false” and “misleading.”

A consumer class-action lawsuit filed in February 2015 claimed that Beneful contained harmful substances that sickened or killed 1,400 dogs. Nestlé Purina responded that the lawsuit was “baseless” and that Beneful remains a “high-quality, nutritious food.”

“Online postings often contain false, unsupported and misleading allegations that cause undue concern and confusion for our Beneful customers,” said the company.

In 2015, Nestlé Purina launched the “I Stand Behind Beneful” campaign ad to counteract the rumors.

And in November 2016, the class-action lawsuit was dismissed, with the judge ruling there was not enough evidence that the pet food was “unsafe based on the mere fact that 1,400 dogs ate Beneful and got sick or died thereafter.”

The judge added: “Indeed, there is no evidence such as an evaluation by a veterinarian that a dog actually did get sick or die because it ate Beneful.”

Dr. Debora Lichtenberg, VMD, told Petful in 2015, “Some of my clients believe they have done irreparable damage to their pet because they have fed this food. One of my clients is convinced that his elderly dog died last year because he fed Beneful. I believe the dog died of other causes.”

“Although many veterinarians will tell you that Beneful and similar low-end pet foods are not on their ‘recommended’ list, you shouldn’t panic if you’re feeding Beneful,” Dr. Lichtenberg said.

Board-certified veterinary nutritionists — who have no reason to protect Nestlé Purina or any other company — were not convinced that Beneful was deadly, she said.

The perpetual rumors and complaints are in the realm of “fearmongering and hysteria,” according to Dr. Jennifer Larsen, DVM, PhD, DACVN, of the University of California, Davis, School of Veterinary Medicine.

The class-action suit alleged that propylene glycol, approved by the U.S. Food and Drug Administration (FDA) as a food additive for humans and dogs, was the source of the sickness and deaths in dogs who ate Beneful. Many people confuse propylene glycol with ethylene glycol, a toxic agent found in antifreeze. They are not the same.

“There are hundreds of reasons a dog becomes ‘sick,’ lethargic, collapses, etc.,” said Dr. Lichtenberg. “The internet has allowed people to find one reason — Beneful — to explain away a vast array of canine illnesses and to create hysteria among good people.”

She added: “Millions of dogs have eaten Beneful and other crappy foods without getting sick. Death by low-exposure poisoning over a number of years is possible, but it’s more in the realm of TV doggy drama than real life.”

Has Beneful Dog Food Ever Been Recalled?

Yes — Beneful has been recalled once, in March 2016. The specific 10 oz. tubs of Beneful Prepared Meals and Beneful Chopped Blends wet dog food potentially didn’t have enough vitamins and minerals. Nestlé Purina said it had discovered the problem during its own quality checks.

The recall announcement did not indicate if there had been any reports of illness as a result of the vitamin problem. The company noted that it was issuing the recall out of an abundance of caution “for those dogs who may have eaten the affected product as their only meal for more than several weeks.”

See below for information about that Beneful dog food recall.

Cause: Inadequate vitamins and minerals. Announcement: Company news release dated March 9, 2016 (archived here). What was recalled: The following Beneful wet dog foods in 10 oz. tubs, with both a “best before” date range between June 2017 and August 2017 and a production code range starting with the first 4 digits of 5363 through 6054:

This recall also involved certain 10 oz. tubs of Purina Pro Plan Savory Meals wet dog food. These, too, had both a “best before” date range between June 2017 and August 2017 and a production code range starting with the first 4 digits of 5363 through 6054:

No other Purina products or sizes were affected.

Have You Had a Problem With Beneful?