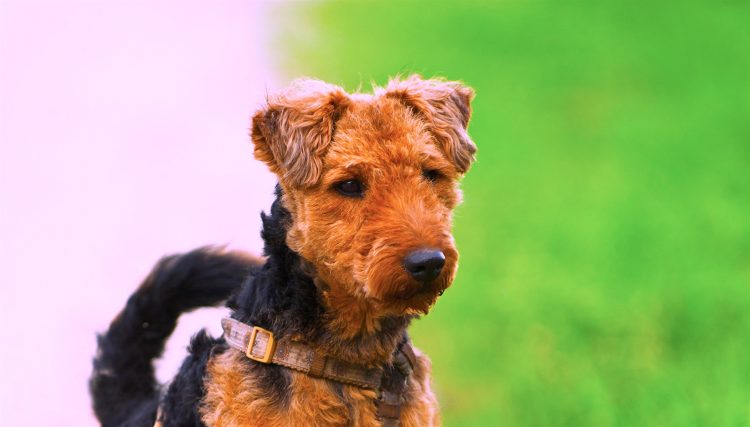 Welsh Terriers are medium-sized friendly dogs who originated in Wales in the 1400s.

They look like smaller versions of the Airedale Terrier.

Their small, almond-shaped eyes are dark brown, and their ears are V-shaped. The tail is carried upright and usually docked to give the body a square appearance (tail docking is illegal, except for working dogs, in some countries).

They have round feet that are catlike.

Welsh Terriers were recorded in 1450 by a poet in Wales thanking someone who had gifted him a dog, although their lineage may stretch back much earlier than the 1400s.

The American Kennel Club lists the breed as a direct descendant of the Old English wirehaired sporting dog, which had a similar black-and-tan coat.

Farmers in Wales used the dogs to catch vermin and small predators, as well as to hunt rabbits, foxes, otters and badgers. Fox hunting was popular in the 1700s, and hunters bred Welsh Terriers to work in packs to flush out the foxes.

The Kennel Club in England recognized the breed in 1887, and the breed standard was written the same year.

Although the Welsh Terrier Club of America says the dogs initially came to the United States in 1885, the American Kennel Club (AKC) says a man named Prescott Lawrence imported the first Welsh Terriers (one male and one female) in 1888.

The AKC officially recognized the breed in 1888, and the Welsh Terrier Club of America was formed 12 years later.

Affectionate and loyal, Welsh Terriers love spending time with their humans, and they are great with older children.

Though they generally get along with other dogs, they may be dog-aggressive if they lack training and socialization. They also may chase smaller animals.

These smart dogs don’t respond well to harsh training or treatment, and can become aggressive as a result. Make sure to socialize your Welsh Terrier whenever possible.

They make terrific watch dogs and travel well, although some of them may suffer from travel/motion sickness.

Welsh Terriers have a great desire to please and love to work.

VERY HIGH: Welsh Terriers need daily exercise — they have an endless supply of energy — so let them run around and play each day. They can adapt to apartment living but would do best with a large yard.


The breed’s high prey drive means your dog must be on a leash or within a secured area when outdoors. Welsh Terriers will chase anything that moves. Once they get into hunting mode, they aren’t likely to pay attention to you or their surroundings. This makes them vulnerable to predators and dangers such as car traffic.

Check your fence for barriers underneath the links or boards — these dogs love to dig.

MEDIUM: Your Welsh Terrier will not shed much if you maintain the coat. Brush your dog’s body and face a few times weekly to remove dead hairs, and bathe as needed. Check the ears for debris and excess hair, and trim as needed.


Trim and/or strip the coat every 3 months, trim the nails, and clean your dog’s teeth regularly — or find a local groomer to do these tasks for you.

LOW: Welsh Terriers are healthy dogs, according to the AKC and the Welsh Terrier Club of America, but they are susceptible to some genetic disorders, including glaucoma, skin allergies and epilepsy.

We told you Welsh Terriers have high prey drives:

Check with local rescues and shelters first to find a Welsh Terrier near you.

If you contact breeders, get to know them first and inspect their breeding facilities for signs that the dogs aren’t receiving proper care.